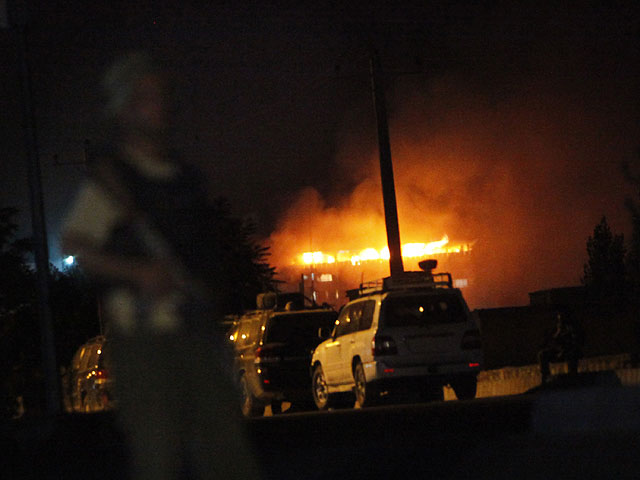 The Western military coalition in Afghanistan on Thursday pinned the brazen suicide attack on a luxury hotel in the Afghan capital earlier this week squarely on a Pakistani militant group.

The International Security Assistance Force (ISAF) said in a statement Thursday that a "top Haqqani Network leader suspected of providing material support to the Kabul suicide bomb attack" was killed the following day in a targeted strike by NATO aircraft inside Afghanistan, near the Pakistani border.

Afghanistan's leaders were also quick to point the finger at Pakistan-based militants following the attack on the Inter-Continental hotel, which left 12 people dead, including a provincial judge who was in Kabul to attend a conference on transferring security duties from Western troops to Afghan national forces.

The attack occurred nearly a week after President Obama announced he was withdrawing 33,000 U.S. troops from Afghanistan and would end the American combat role by the end of 2014.

"The Haqqani Network, in conjunction with Taliban operatives, was responsible for the Tuesday night attack," ISAF said in a written statement also announcing the death of Ismail Jan in the "precision strike" in Paktia province. Jan, said the statement, was the deputy to the Haqqani network's senior commander inside Afghanistan.

Why won't Pakistan dump the Islamists?

The Haqqani network is based in Pakistan, where the country's leaders have showed resistance to intense pressure from the U.S. to target members of the militant group. The group's fighters are known to move back and forth across the border to attack U.S. and Afghan forces

Pressure on leaders in Islamabad is likely to increase, both from Washington and Kabul, in light of the Haqqani link to the Kabul attack.

Navy Vice Adm. William McRaven, the nominee to be the next commander of U.S. Special Operations Command, underlined the severity of the problem of Pakistani havens for extremist groups such as the Haqqani network in hearings before the Senate Armed Services Committee this week.

McRaven said he believes the Pakistani government could, if it chose, do more to alleviate the problem.

"It is both a capacity issue for the Pakistanis and I think potentially a willingness issue," McRaven said.