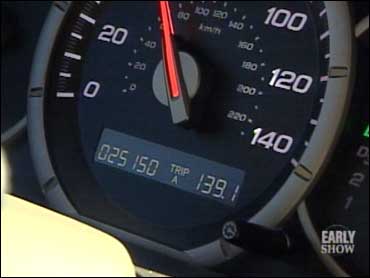 How many miles you have on your car can affect everything from your warranty coverage and lease fees to your car's resale value.

Some automakers are being accused of cheating owners out of thousands of miles by designing cars with defective odometers.

Sharon McQuiston bought her Honda SUV for its high numbers in gas mileage, resale value and reliability. But she soon found that some of her Honda's numbers were running too high.

"The reputation of Honda is so, so great," she told CBS News correspondent Mark Strassmann."I feel cheated in that, I'm being cheated out of miles that I haven't driven."

While McQuiston's odometer says she's driven 25,000 miles, she has really gone 500 miles less. Her car is one of millions of Hondas with faulty odometers that rack up miles too fast.

"They were accelerated, they registered more miles than the car actually traveled," attorney James Holmes said.

Holmes has tested the odometers in many Honda models and says on average, they run 2 percent fast. While that doesn't sound like much, it makes a big difference.

To prove the point, we compared Sharon's Honda to an SUV that had an accurate odometer.

Each vehicle was driven 10 miles according to its odometer and then stopped. The Honda odometer clocked 10 miles before the distance was actually met.

"You can see the distance is over 1,000 feet between these two vehicles, this distance is distance that Honda owners bought and paid for, but never received," Holmes said.

In a class action lawsuit, Holmes charged Honda with fraud, claiming the company actually designed their odometers to run too fast.

Honda says the error was an accidental oversight in 2002 through 2006 models and has made new models more precise. In a settlement, Honda agreed to extend warranties on 6 million cars and reimburse owners for out-of-pocket repairs and lease fees. It cost Honda millions of dollars.

But the case has raised the question: How accurate are the odometers in other brands of cars? To find out, CBS News put four popular makes to the test: Toyota, Ford, Chevy and Nissan.

Jim Smith, who works for the Society of Automotive Engineers — the group that sets voluntary odometer standards — tested the cars. First, he checked tire pressure, filled up the tanks and hit the road on a 40-mile trip. Smith used a GPS to track the real mileage and measure each odometer's margin of error.

In the end, the Ford Taurus, Chevy Impala and Toyota RAV4 all passed. But the Nissan Altima's odometer ran over 2 percent fast, which was unacceptable to Smith.

"Two percent with new tires, I start to get suspicious," he said.

So did James Holmes. He found the same odometer error in 10 Altimas and has filed a new class action suit against Nissan.

"I expect that we'll find that they knew about the problem and made a decision not to correct it," Holmes said.

Nissan declined to comment, but in court documents, the company denies its odometers are designed to be inaccurate — and says they meet all industry standards.

Holmes is on a crusade to expose faulty odometers in car makers so consumers like McQuiston get every mile they pay for.

Honda's odometer settlement includes all 2002-2006 Honda and Acura models, and some 2007 Honda models. For more information about the settlement and whether you qualify, log onto HondaOdometerClassAction.com.