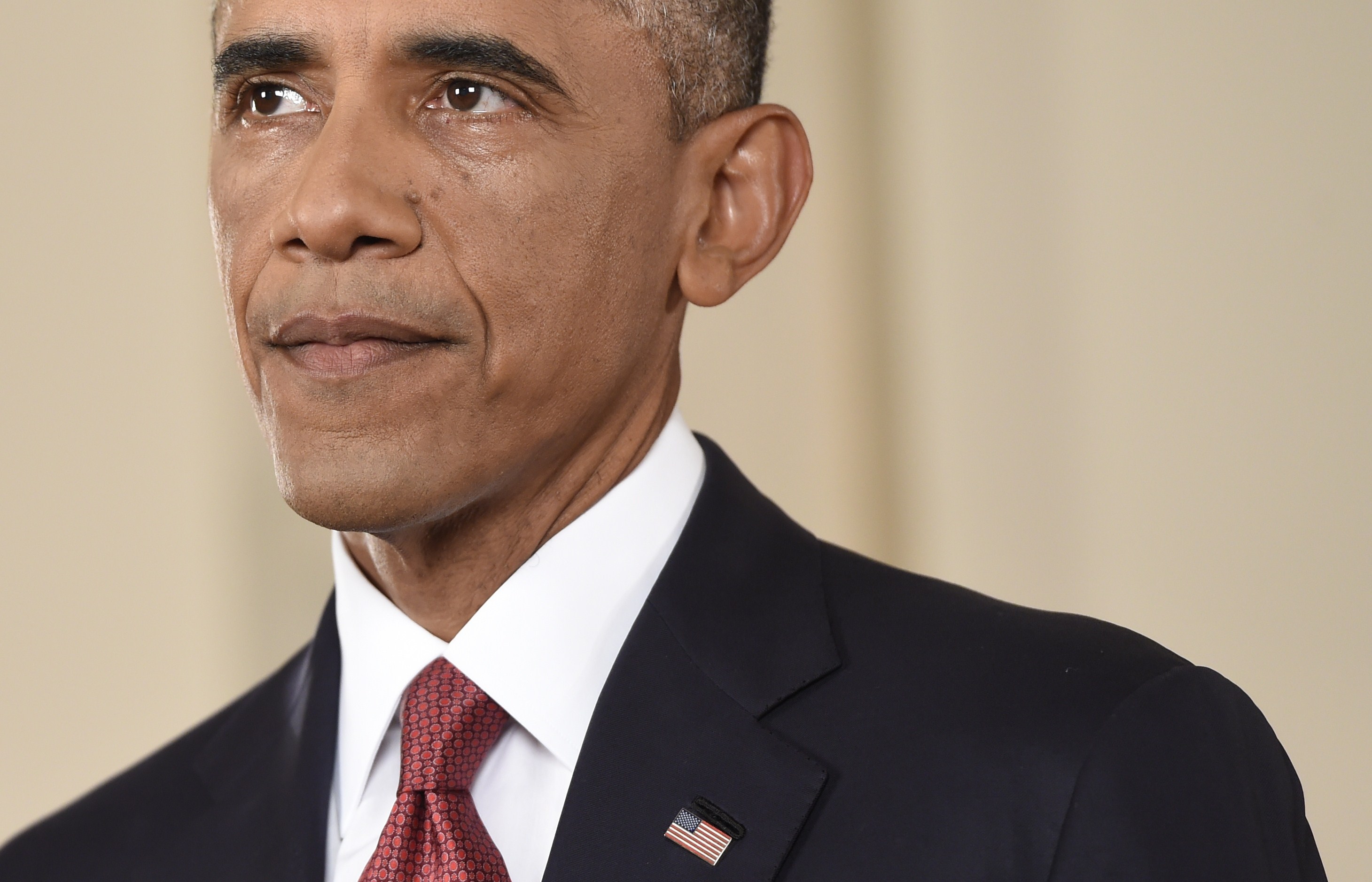 Despite his speech announcing his strategy to "degrade and ultimately destroy" the Islamic State of Iraq and Syria (ISIS) last week, President Obama receives criticism for his most recent foreign policy challenge - the situation with the ISIS militants - and his approval ratings on handling terrorism and foreign policy have also taken a hit.

Meanwhile, most Americans - 55 percent - don't think Mr. Obama has a clear plan for dealing with ISIS.

The president's approval rating on handling the situation reflects that: overall, more Americans disapprove (48 percent) than approve (39 percent) of his handling of ISIS militants in Iraq and Syria. Most Democrats (63 percent) approve, while most Republicans (74 percent) disapprove.

In addition, Mr. Obama's handling of the threat of terrorism, once considered an area of strength, is now at the lowest of his presidency. Just 41 percent approve of his handling of the issue, a drop of 12 points since March.

Since March, the president's approval rating on handling terrorism has declined across the political spectrum: Republicans (down 11 points), Democrats (down 16 points) and independents (down 10 points).

Mr. Obama's overall job rating remains more negative than positive. Forty percent approve of his overall job performance, which is similar to last month, although his rating is 5 points lower than it was heading into the 2010 congressional elections, when Republicans won control of the House of Representatives.

At 40 percent, Mr.Obama's job approval rating is similar to George W. Bush's in September 2006, before the 2006 midterm elections - when Democrats captured control of the House and the Senate. Mr. Bush was at 37 percent approval 8 years ago. Former Presidents Bill Clinton and Ronald Reagan were at 62 and 63 percent approval, respectively, at the same point in their presidencies.

Most Americans (57 percent) are disappointed in Mr. Obama's presidency, including a third who are very disappointed. Much of this discontent comes from Republicans and independents, but a quarter of Democrats express at least some disappointment.

These negative evaluations of the president may have an impact at the ballot box in November.

Some registered voters, especially Republicans, say their vote for Congress this fall will be against Mr. Obama. More than half of Republicans (55 percent) say that, as do a quarter of independents.

How to Handle the Threat from ISIS

Some of the potential actions against ISIS outlined by President Obama find favor with many Americans. 71 percent favor continuing airstrikes against ISIS targets in Iraq, while 69 percent favor expanding air strikes to include ISIS targets in neighboring Syria. Sending in additional military advisors into Iraq to help the Iraqi Army fight ISIS militants also gains favor with a majority of Americans (66 percent). These three measures enjoy strong bi-partisan support.

Americans are less enthusiastic about training and providing military equipment to rebels in Syria so that they can fight ISIS militants in that country: 48 percent approve, while 40 percent disapprove. Most Americans - 55 percent - are opposed to sending ground troops to fight ISIS.

Most Republicans (62 percent) favor sending ground troops into Iraq or Syria, while most Democrats (65 percent) and independents (59 percent) oppose this.

At the same time, Americans also express concern that U.S. intervention in Iraq and Syria will lead to a long and costly involvement there. More than eight in 10 are at least somewhat concerned about that, including 40% who are very concerned. Concern about this extends across partisan lines.

While 53 percent have at least some confidence in Mr. Obama's ability to handle an international crisis, just 22 percent say they have a lot of confidence - down from polls conducted earlier this year, and just half of what it was two years ago.

Among Democrats, 47 percent have a lot of confidence, compared to just 3 percent of Republicans and 14 percent of independents.

Issues and the 2014 Election

Despite the conflicts overseas, the economy (38 percent) is the most important issue to both Republican and Democratic voters in this election. Most continue to say the nation's economy is in bad shape.

The Republican Party leads the Democratic Party on some key issues. Voters nationwide say the Republican Party will do a better job on the economy (the top issue for voters), foreign policy, and terrorism. The Democrats have the edge on health care, despite the unpopularity of the Affordable Care Act. The parties are even on handling immigration.

As recently as early August, the parties were even on the economy at 42 percent each.

The poll asked voters how a candidate's stance on some issues might impact their vote.

Dissatisfaction with Washington and the Political Parties

Americans are clearly displeased with Washington. Seventy-seven percent are dissatisfied or angry about the way things are going in the nation's capital. Majorities across party lines are unhappy, but Republicans (39 percent) are more likely to say they are angry than Democrats (16 percent).

In addition, two-thirds of Americans say the country is off on the wrong track.

Voting in the Midterms

Nor is there a lot of excitement about voting this year. Nearly half of registered voters say they are less enthusiastic than usual about voting compared to previous midterm elections. Thirty-eight percent are more enthusiastic, but that's down from 43 percent in 2010 and 2006. The level of enthusiasm among voters today is similar to what it was in 1998.

But, there is a partisan enthusiasm gap: Republicans (45 percent) are more likely to be enthusiastic than either Democrats (33 percent) or independents (36 percent).

If the elections for the U.S. House of Representatives were held today, Republicans would hold a six-point edge (45 to 39 percent) in a national vote among likely voters - those most apt to vote in this election. But with nearly two months to go before Election Day, there is time for change, as 12 percent of likely voters say they don't know who they would vote for or it depends.

While most partisans plan to vote for their own party's candidate, independents say they'll cast their vote for the Republican (40 to 31 percent). Suburban (49 to 38 percent) and rural voters (55 to 32 percent) lean toward the Republican candidate, while those in urban areas are inclined to support the Democrat (46 percent to 33 percent).

Amid dissatisfaction with Washington, only 5 percent of voters think most members of Congress have done a good enough job to deserve re-election. Eighty-seven percent say it's time to give new people a chance - the highest in CBS News/New York Times Polls.

Voters are only marginally happier with their own Congressional Representative. Just 28 percent (a record low) think their own House member deserves re-election, and 63 percent think it's time for someone new (a record high).

This poll finds no improvement in overall views of the health care law. More Americans disapprove (51 percent) than approve (41 percent) of it, as they have since the law was passed.

On the economic side, seven in 10 Americans support increasing the federal minimum wage from $7.25 to $10.10.

Americans continue to support legal status for illegal immigrants currently in the U.S., including half who favor a path to citizenship.

A slim majority think Mr. Obama should take action by executive order if Congress does not address the issue of immigration. Most Republicans are opposed to this.

As they have for about a year now, a majority of Americans (56 percent) say it should be legal for same-sex couples to marry. Democrats and independents are more likely than Republicans to think that it should be legal.

The Threat of Terrorism

Concerns about terrorism have risen slightly. 16 percent of Americans think a terrorist attack in the U.S. is very likely to happen in the next few months; 11 percent felt that way in March. Another 35 percent think an attack is somewhat likely. Expectations for attacks tend to rise after other terrorist incidents, such as the Boston Marathon bombing in 2013, the underwear bomber in late 2009, and the Madrid bombing in 2004.

Should the U.S. Have Withdrawn from Iraq?

The surge of ISIS in the region occurs roughly two and a half years after the removal of the last remaining U.S. combat troops from Iraq in 2011. Just under half of Americans think the U.S. should have left some American troops in Iraq; about the same percentage thinks U.S. troops should not have been left there. Nearly two in three Republicans think U.S. troops should have remained there, while far fewer Democrats and independents agree.

The threat of ISIS grew in the public consciousness with the execution of two American journalists and one British aid worker captured by ISIS - the three victims hailing from countries that have a policy of refusing to negotiate with hostage-takers to secure their release.

Most Americans support this policy: 53 percent of Americans say that the U.S. government should never negotiate with international terrorists for hostages under any circumstances. 38 percent think there are circumstances when the government should do so. While most Republicans and independents think the U.S. should never negotiate with terrorists, Democrats are more divided.

This poll was conducted by telephone September 12-15, 2014 among 1,009 adults nationwide, including 854 registered voters. The sample size for likely voters is 470. Not all likely voters are assigned the same probability of voting.

Data collection was conducted on behalf of CBS News and The New York Times by SSRS of Media, Pennsylvania. Phone numbers were dialed from samples of both standard land-line and cell phones. Interviews were conducted in English and Spanish. This poll release conforms to the Standards of Disclosure of the National Council on Public Polls.