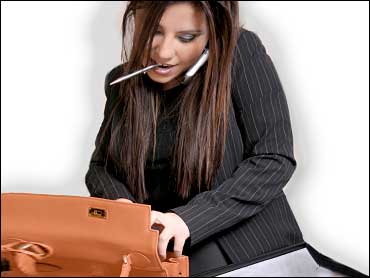 All the latest studies say multitasking makes us less efficient and productive, not more. But as demands on our time increase, we go ahead and do it anyway.

Psychologist Jennifer Hartstein, a cognitive behavioral specialist, came to The Saturday Early Show to explain how we can survive multi-tasking and retain our sanity.

Before her appearance, Hartstein spoke with an Early Show producer about her suggestions for being able to keep up with the demands on your time.

The Saturday Early Show: Some people say there's really no such thing as multitasking, that it's impossible to do more than one thing at a time. And a new study by researchers at Vanderbilt University says a kind of "bottleneck" in the brain forces us to address problems one after another, even if we are doing it so quickly it seems simultaneous. What's your take on that?

Jennifer Hartstein: I think when we multi-task there's a delay in reactivity. When we have multiple things going on at the same time, we sort of struggle to pay attention, we're inattentive. Reaction time slows down when you're not paying full attention. And for parents, just one second of a delayed reaction could have tragic consequences.

So if multitaskers are really just dividing their time up into smaller slices than others, what about performance? Does multitasking help us get lots of things done well?

No. The real problem is, there is no focusing on one thing. Our attention is diverted. Research has shown that when there is too much multitasking in a business, revenues actually go down, because everyone is being interrupted so frequently. You pay less attention to minor details and may wind up having to do them over, or do them only superficially.

Still, face facts: A lot of us have to at least try to do lots of things at once. How can we do this most effectively?

What works best is having a routine. So if you know you have to get your kids to school and get to work on time and help with the kids' projects and do your projects, the more routine and consistent your schedule, the better. It helps you avoid unexpected problems.

Other things are to create a schedule for your life - train yourself not to check your e-mail every five minutes.

Music can help some people concentrate, but you want to pick instrumental music, without lyrics that might distract you.

Cut yourself some slack by prioritizing things you 1) have to get done, 2) feel would be nice to get done, and 3) you can let others do.

Learning how to delegate is great, if you have someone to delegate to. A lot of moms have that option with their husbands, but they don't use them. Sometimes your husband is slow to do something, or reluctant, so you just go ahead and do it yourself.

Some experts say the hardest thing to try to do while multi-tasking is to learn something brand new, or to master a new skill. Do you agree?

I do. You're not giving whatever it is your full attention, so you only learn half-way. You may learn it only for the moment, and wind up having to re-learn it. It's like when you want to remember an important phone number. You repeat it over and over so you retain it. You can't do that if you're multi-tasking.

Whatever our technique for multitasking, it can be hard on us. How can we do all the things that need doing and manage not to go a little crazy?

The most important thing is knowing you can't do it all. Fundamentally, we don't really expect that of ourselves, but sometimes we feel we have to try anyway. It's where prioritizing comes in. First things first, and accept the fact that you're doing the best you can.

Also, celebrate the successes you've had, give yourself a pat on back, a reward. That will help you keep yourself going. And don't forget to ask for help when you need it.

Obviously, there's a safety factor here. Lots of people talk on the phone or do other things while they drive, even though it's risky (and against the law in many places). What's your take on that?

It goes back to the idea that your reactions are delayed. Recent statistics suggest people talking on cell phones are in many more accidents than those who aren't. [A federally funded study released in April 2006 found that almost 80 percent of crashes and 65 percent of near-crashes involved some form of driver inattention, including cell phone usage.]

When we think of multitaskers, we generally think of people in business, with two cell phones, a computer and lots of distractions. But what about multi-tasking moms - with kids, and home and school and soccer games and dinner and so on? Is this the same kind of thing?

That depends on whom you ask. But whether it's fundamentally the same or not, stay-at-home parents are just as busy as on-the-go executives: keeping track of all that stuff for yourself and your kids is just as difficult. It's just a different type of role responsibility. And you have the safety of your children to worry about, too.

We've all seen multitasking circus acts - a guy on a unicycle, playing the harmonica while twirling plates on sticks, that sort of thing. Some studies suggest this is actually easier to master than, say, dealing with several different business deals at the same time. Do you agree?

Yes. If the brain tries to pay attention to two similar things, you can mix them up. If I'm trying to make a deal with person X and person Y, I can easily transpose facts and details in my mind. But making the deal with person X while making dinner plans in an e-mail, that's not as hard.

Also, it's simply true that some people's brains work faster than others. And then there is skill development. Younger adults who've been surrounded by high-technology and communications all their lives are more practiced and so their brains work faster when dealing with multiple tasks.