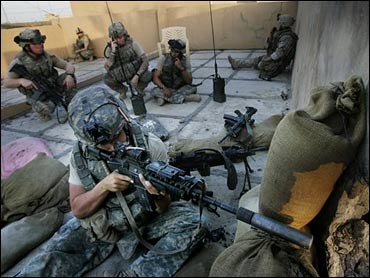 Less than two weeks after insurgent mastermind Abu Musab al-Zarqawi was killed, 85 workers were kidnapped, Saddam Hussein's attorney was dead and at least one U.S. soldier was brutally beheaded — and that's in just 48 hours.

For those looking for change in the insurgency since its leadership shake-up, the spate of violence sends a message of stagnancy — or even heightening brutality.

In other violence, about a dozen people were killed across Iraq, and an al Qaeda-led insurgent group announced that it will execute four Russian hostages.

As for the 85 people kidnapped Wednesday north of Baghdad, gunmen later released about 30 of them — all women and children.

Saddam and his seven co-defendants went on a hunger strike Wednesday to protest the shooting death of an attorney on the ousted Iraqi leader's defense team — the third such killing in the 8-month-old trial.

Lawyer Khamis al-Obeidi, a Sunni Arab who represented Saddam and his half-brother Barzan Ibrahim, was abducted from his home Wednesday morning by men wearing police uniforms, his colleagues said. His body was found riddled with bullets on a street near the Shiite slum of Sadr City. Police provided a photo of al-Obeidi's face, head and shoulders drenched in blood.

This third brutal killing of an attorney has raised the question of whether Saddam's trial is really fair, reports CBS News correspondent Lee Cowan.

Saddam's chief attorney, Khalil al-Dulaimi, blamed the killing on the Interior Ministry, which Sunnis have alleged is infiltrated by so-called Shiite death squads.

"We strongly condemn this act, and we condemn the killings done by the Interior Ministry forces against Iraqis," he said.

There was no comment from the ministry. Hit squads and other gangs are known to often disguise themselves as police officers.

In the United States, seven Marines and a sailor were charged with murder in the April death of an Iraqi civilian, the Marine Corps said Wednesday.

All eight also were charged with kidnapping, according to a Marine statement issued at Camp Pendleton, Calif. Other charges include conspiracy, larceny and providing false official statements.

On Monday the military had announced that three soldiers of the 101st Airborne Division were charged with murder and other offenses in connection with the May 9 killings. It was not clear why charges against the fourth soldier were not announced until Wednesday.

In the case of the April killing of an Iraqi civilian, the allegation is that Marines pulled an unarmed man from his home on April 26 and shot him to death without provocation.

Married with six children, al-Obeidi was the third member of Saddam's defense team to be killed since the trial began Oct. 19.

In the Saddam trial, Al-Dulaimi and his colleagues said the brutal slaying was an attempt to intimidate the defense before it begins final arguments July 10, a process that will take about 10 days.

"We consider his killing a message to us in the defense: 'To continue what you are doing will result in death in broad daylight on the streets of Baghdad.' It is a message that's written in blood," said Mohammed Moneib, an Egyptian lawyer retained by Saddam.

"We will defy terrorism," al-Moussawi told The Associated Press. "We will continue with the trial and will not be deterred," he said. The prosecution has demanded the death penalty for Saddam in the killing of 148 Shiites during a crackdown against the town of Dujail in the 1980s.

Despite the killing, Saddam's lawyers said they would forge ahead with their closing arguments.

However, al-Dulaimi told the AP in Amman, Jordan, that Saddam and his co-defendants "went on a hunger strike today to protest the killing of Khamis al-Obeidi."

"They pledged not to end the strike until international protection is provided to the defense team," he said.

State Department deputy spokesman Adam Ereli said "every form of protection and assistance" is offered to the prosecution and defense, but "unfortunately, in the case of this individual, he refused" them.

The U.S. Embassy urged the lawyers and their families to "accept the full range of security measures offered for their protection."

"We are committed to helping the Iraqi government bring those responsible to justice," Ereli said.

A spokeswoman for Amnesty International said both Iraqi and U.S.-led coalition authorities need to investigate the assassination.

The kidnapping of the 85 workers north of Baghdad was only the most recent case involving mass abductions.

Police said it was unclear why gunmen seized the workers as they left the al-Nasr General Complex, a former military plant that now makes metal doors, windows and pipes, but noted that the assailants apparently looked at their captives' identity cards. In Iraq, it is often possible to determine someone's ethnic, sectarian and tribal affiliation from their names. The workers were thought to be mostly Shiite, while the plant is located in Taji, a predominantly Sunni Arab area with insurgent activity.

Kamel Mohammed, a plant engineer, said he saw gunmen in three sedans intercept two of the factory's buses and a minivan. The buses are used to ferry workers from the plant to the Shiite areas of Baghdad.

An al Qaeda-led insurgent group said in a Web statement that it has decided to kill four Russian Embassy workers kidnapped in Baghdad on June 3. It said Moscow failed to meet its demands for a full withdrawal of troops from Chechnya.

The statement by the Mujahedeen Shura Council came a day after the same group claimed responsibility for killing two U.S. soldiers whose bodies were found south of Baghdad.

At least one and possibly both of the soldiers was beheaded, a U.S. military official in Washington said Wednesday. The official requested anonymity because the final report on the bodies' conditions has not been formally released.