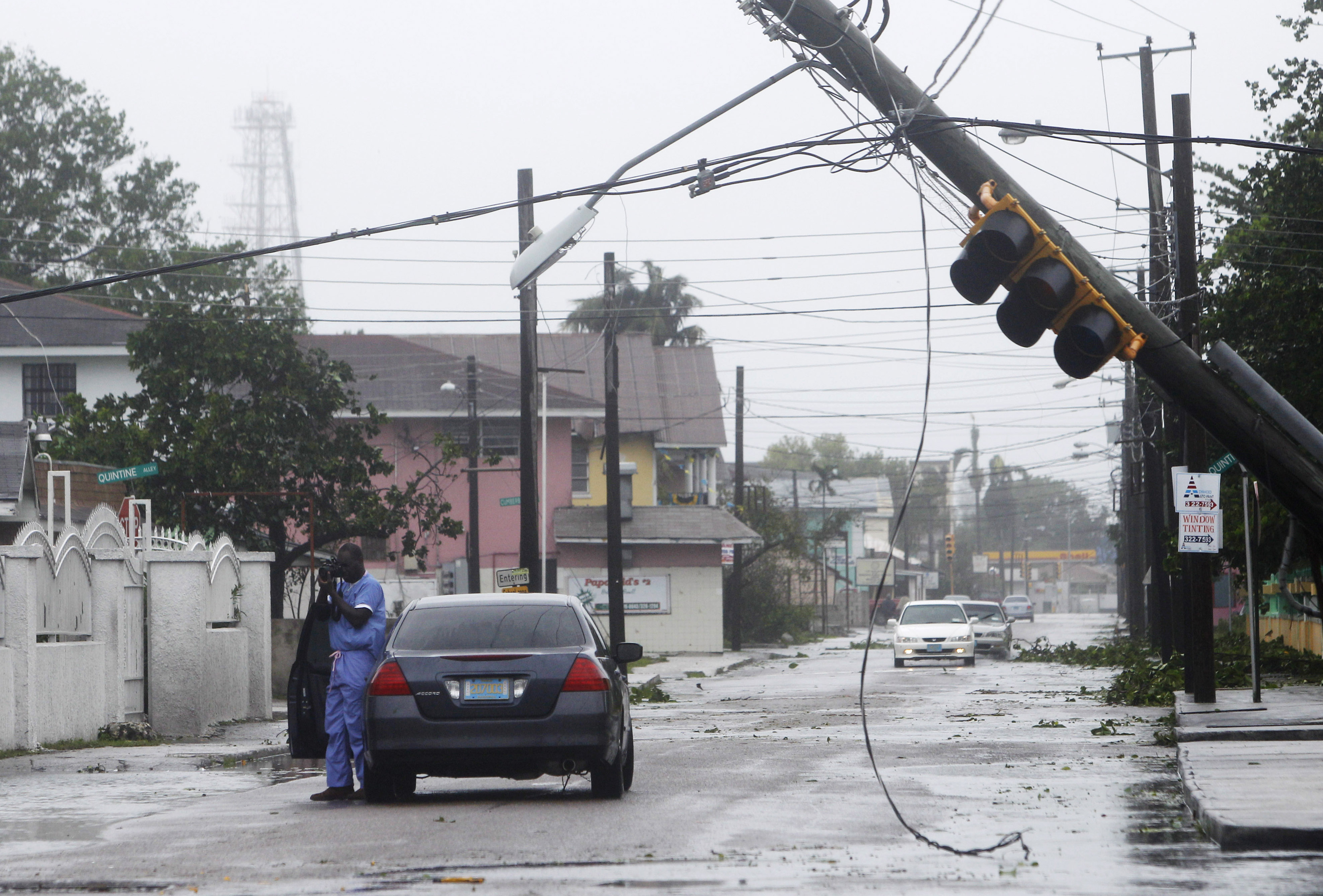 NASSAU, Bahamas - A large and powerful Hurricane Irene roared across the Bahamas archipelago on Wednesday, largely sparing the crowded capital but destroying property in less-populated areas as the category 3 storm tore its way toward the U.S. East Coast.

There were no immediate reports of major injuries or deaths but property damage appeared likely to be extensive on Acklins and Crooked islands, in the southern part of the chain, said Capt. Stephen Russell, director of the country's National Emergency Management Agency.

A settlement known as Lovely Bay was destroyed while at least 40 homes were badly damaged on the island of Mayaguana, the agency said. Authorities were still gathering damage reports and there were few details on the destruction.

Major damage was also anticipated on the island of Eleuthera, which was being battered Thursday morning, as well as Rum Cay and Cat Island. All were expected to have full and extended exposure to Hurricane Irene's powerful winds, which had weakened slightly Thursday to 115 mph (185 kph).

"That can be devastating for some of those islands," Russell said.

The U.S. National Hurricane Center in Miami, Florida, warned Thursday that an "extremely dangerous storm surge will raise water levels by as much as 7 to 11 feet (2 to 3 meters) above normal tide levels over the Bahamas."

"The surge will be accompanied by large and dangerous waves," and Irene is expected to dump from 6 to 12 inches (15 to 30 centimeters) of rain on the islands over the next day and a half, the center said on its website.

Irene's core was forecast to continue moving over the northwestern Bahamas on Thursday before heading north toward the U.S.

A hurricane watch was issued for much of North Carolina's coast, and emergency officials expanded evacuation orders to include hundreds of thousands of tourists and locals. The areas include the barrier island chain known as the Outer Banks, which is expected to take the brunt of Irene's first hit over the weekend.

The governors of North Carolina, Virginia and New Jersey also made emergency declarations to free up storm recovery resources. In Virginia, the U.S. Navy ordered the Second Fleet to leave Norfolk Naval Station to keep ships safe from the approaching hurricane.

The storm is expected to come ashore Saturday in North Carolina with winds of around 115 (185 kph). Forecasters predict it will then chug up the East Coast, dumping rain from Virginia to New York City before a much-weakened form trudges through New England.

As of 2 p.m. EDT (1800 GMT), the Category 3 hurricane was centered about 105 miles (170 kilometers) north of the Bahamian capital, Nassau, and 610 miles (980 kilometers) south of Cape Hatteras, North Carolina, the National Hurricane Center said.

Hurricane-force winds extended outward up to 70 miles (110 kilometers), and tropical storm-force winds up to 290 miles (465 kilometers). Some strengthening was possible later Thursday, the center said.

Meanwhile, a new tropical depression formed far out over the Atlantic early Thursday, with the National Hurricane Center saying it would likely become a tropical storm later in the day.

Forecasters said Nassau, on New Providence island, would see tropical storm-force winds no greater than 65 mph (104 kph) because the storm track had shifted and it was not getting the direct hit that many had feared. The island is the most populated, with more than 200,000 people, and is a major tourist destination.

This storm was only the third since 1866 to cross the entire length of the island chain and Prime Minister Hubert Ingraham said the country was bracing for extensive damage to buildings and infrastructure. But he predicted few casualties overall.

Still, the storm could cause problems. Trevor M. Basden, senior deputy director of the country's Department of Meteorology, said New Providence could expect to be buffeted with fierce winds until Thursday evening. "That is quite of bit of time to be experiencing tropical storm-force winds," he said.

Nassau, surrounded by sparkling greenish-blue waters, is known to flood even in heavy rain so the storm surge was expected to make many roads impassable, especially in the colonial downtown.

Authorities set up emergency shelters throughout the country but most locals were expected to stay in their own homes or with friends and family while visitors stayed in the handful of hotels that remained open. Many tourists didn't wait around to find out what would happen and fled the country before the airport closed.

Puerto Rico, which also was hit by Irene, was struggling with heavy flooding that has stranded motorists and affected several neighborhoods. Dozens of landslides have been reported. On Tuesday, a 62-year-old woman died at a hospital after trying to cross a swollen river in her car near the capital of San Juan, police said.

In the Dominican Republic, flooding, rising rivers and mudslides prompted the government to evacuate nearly 38,000 people. Authorities said a 40-year-old man was killed when floodwaters destroyed his home in Cambita, about 25 miles (40 kilometers) west of Santo Domingo, and a 42-year-old Haitian migrant drowned in a surging river near the city of El Seibo.