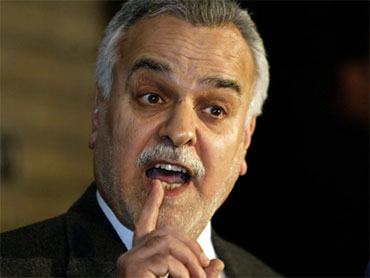 The veto threat comes a week after lawmakers passed the long-delayed legislation, paving the way for national polls in January. Any delay in the voting could derail a U.S. plan to withdraw combat troops from Iraq, a process scheduled to ramp up following the election.

Tareq al-Hashimi gave parliament until noon on Tuesday to amend the election bill and ensure greater representation for voters outside of Iraq, most of whom are Sunni Arabs like al-Hashimi.

"If the law is not amended by the parliament or the electoral commission by reconsidering the distribution of ... seats, I will definitely use my constitutional right," al-Hashimi said on al-Hurra television, referring to his veto power over legislation as vice president and a member of the three-person presidential council.

"I will not allow the passage of a law that contradicts the constitution and the principles of justice regardless of the price to be paid," he added.

Earlier Sunday, in a letter to parliament, al-Hashimi said the election bill lawmakers passed a week ago "did not give fair treatment to the large segment of Iraqi people who are living abroad and who were forced to leave their country for reasons beyond their control."

Most of the estimated 2 million Iraqis who fled the sectarian violence in their homeland are Sunni Arabs. The vast majority now live in Jordan and Syria.

Lawmakers haggled for weeks over the election law before passing it on Nov. 8, much to the relief of the United States, which has tied its withdrawal of all combat troops to the national vote. U.S. military officials have said that they will begin to draw down forces about 60 days after the election, with the idea that the country will be on stable footing by then.

Under a plan by President Barack Obama, all U.S. combat troops must be out of Iraq by the end of August 2010. The rest of the troops, such as trainers, must leave by the end of 2011.

But al-Hashimi's threatened veto raises anew a possible delay to the elections, which according to the Iraqi constitution must take place by the end of January, and could undermine Iraq's fledgling democracy and push back the U.S. troop drawdown.

The head of Iraq's Independent High Electoral Commission, Faraj al-Haidari, said he plans to meet with al-Hashimi on Monday to discuss his reservations with the bill.

"We hope that this problem will be solved in the parliament soon," al-Haidari told The Associated Press. "We do not want to make a prejudgement on what will happen. We will decide later on the next move if the law is vetoed."
By Associated Press Writer Sameer N. Yacoub