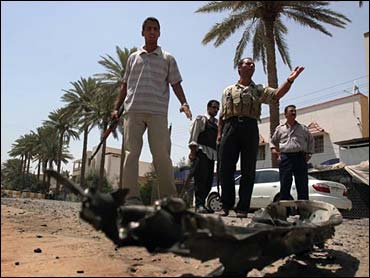 Gunmen killed an aide to Iraq's most influential Shiite cleric and two bodyguards in a drive-by shooting outside a Baghdad mosque Friday — an attack likely to further increase tensions between the Shiite majority and the Sunni minority, officials said.

Shiite cleric Kamal Ezz al-Deen al-Ghuraifi was shot as he was about to leave al-Doreen mosque after leading prayers, according to his son, Hamid Kamal. Police Lt. Thair Mahmoud confirmed the attack.

"Gunmen in a speeding car sprayed him with machine guns," Mahmoud said.

Two bodyguards were killed and another four were wounded, he said.

Al-Ghuraifi, in his 60s, had been a Baghdad representative of Iraq's leading Shiite cleric, Grand Ayatollah Ali al-Sistani, for the past decade, said Amer al-Hussaini, a friend of al-Ghuraifi's and a member of al-Hawza al-Ilmiyah, the Shiites' ancient seminary in the southern city of Najaf.

It was the third attack on al-Sistani aides in recent weeks.

The blaze came a day after Baghdad's mayor decried the capital's crumbling infrastructure and the lack of clean water and threatened to resign if the Iraqi government did not provide more money.

The fire halted all distribution from the Karkh water station in Tarmiyah, which serves northern and western Baghdad, and repairs could take at least three days, said Jassim Mohammed, the project's director.

While Mohammed said he believed a bomb started the fire, a municipal official said the blaze was still under investigation.

While militants frequently target infrastructure, loud explosions can occur when a transformer blows.

Iraqi engineers told the U.S. military the fire resulted from a blown transformer and not an insurgent attack, said Sgt. 1st Class David Abrams, a spokesman for Task Force Baghdad.

"We verified with engineers on the site that it was a blown transformer," Abrams said.

Efforts to expand Baghdad's water supplies were set back in June when insurgents sabotaged a pipeline near Baghdad.

Mayor Alaa Mahmoud al-Timimi's threat to resign over the dismal state of the capital's infrastructure was an indication of the daily misery that Baghdad's 6.45 million people still endure more than two years after the U.S.-led invasion. They are wracked not only by unrelenting bombings and kidnappings but serious shortages of water, electricity and fuel.

"It's useless for any official to stay in office without the means to accomplish his job," al-Timimi said Thursday.

Al-Timimi wants $1.5 billion from the Iraqi national government for Baghdad in 2005 but so far has received only $85 million, said his spokesman, Ameer Ali Hasson.

Some complain their water smells bad, and Hasson acknowledged that in some areas, it gets mixed with sewage.

"The problem is escalating," said al-Timimi, a Shiite who took office in May 2004.

According to City Hall, Baghdad produces about 544 million gallons of water per day, some 370 million gallons short of its required amount. Some 55 percent of the water is lost through leakage in the pipes.