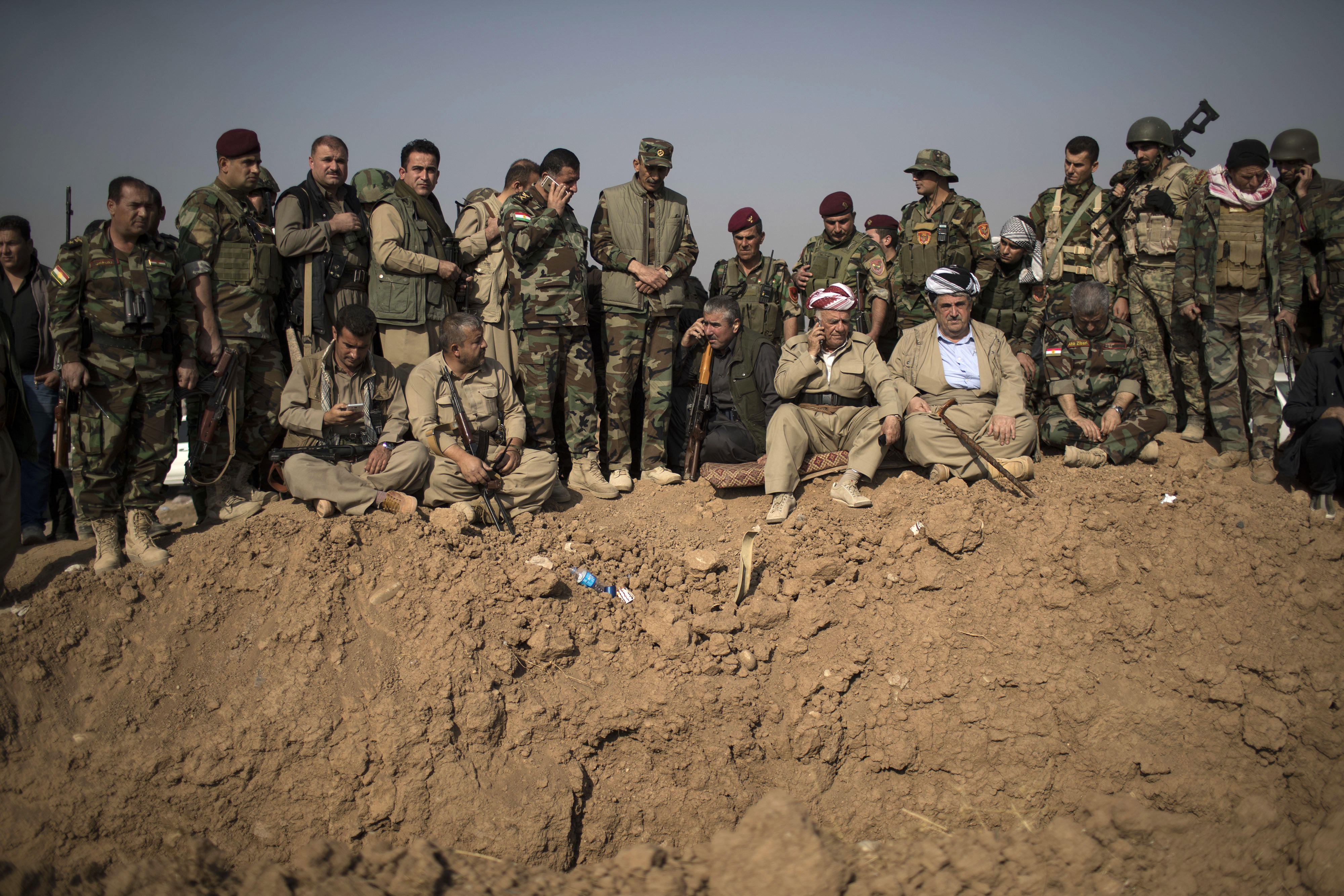 NEAR BASHIQA, Iraq -- Iraqi Kurdish fighters exchanged heavy fire with militants on Monday as they entered a town held by the Islamic State of Iraq and Syria (ISIS) east of Mosul, while troops advancing south of the city discovered a mass grave containing some 100 decapitated bodies.

The offensive to reclaim the town of Bashiqa is part of the broader push to drive ISIS out of Mosul, Iraq’s second-largest city, relieving those living under its occupation from the type of brutality, such as mass killings, that the group has committed.

ISIS militants have carried out a series of massacres since seizing large swaths of southern and central Iraq in the summer of 2014, often documenting them with photos and videos circulated online. On Monday, Iraqi soldiers advancing into the town of Hamam al-Alil, south of Mosul, discovered a pit containing dozens of decapitated skeletal remains, the military’s Joint Military Command said.

The offensive to retake Bashiqa began at dawn with a Kurdish barrage of heavy artillery, Katyusha rockets and mortar rounds slamming into ISIS positions, providing cover for the advance of armored columns.

Smoke rose from the town throughout the day, with large explosions sending dark clouds into the sky.

“We have the coordinates of their bases and tunnels, and we are targeting them from here in order to weaken them so that our forces can reach their targets more easily,” said Iraqi Kurdish commander Brig. Gen. Iskander Khalil Gardi.

Bashiqa, which is believed to be largely deserted except for dozens of ISIS fighters, is located about eight miles northeast of Mosul’s outskirts and about 13 miles from the city center. Iraqi government and Kurdish forces, backed by a U.S.-led coalition and joined by government-sanctioned militias, are fighting to drive IS out of those surrounding areas and open additional fronts to attack Mosul itself.

Bashiqa has been surrounded by Kurdish forces, known as peshmerga, for weeks but Monday’s push appeared to be the most serious yet to drive IS from the town.

Kurdish forces launched mortar rounds and fired heavy artillery into the town Sunday in advance of the offensive. More artillery and air strikes hit the town early Monday as the Kurdish forces’ advance got underway.

On Mosul’s southern front, meanwhile, Iraqi soldiers advancing into Hamam al-Alil, some 12 miles from the city center, discovered a mass grave late Monday containing some 100 decapitated bodies near the town’s agricultural college. Most were reduced to skeletons, said Brig. Gen. Yahya Rasool, the spokesman for the Joint Military Command.

He said a forensics team from Baghdad would investigate the site on Tuesday.

Earlier Monday, army spokesman Brig. Firas Bashar said Iraqi forces had retaken the town and images broadcast by the Lebanon-based Al-Mayadeen network showed soldiers hoisting the Iraqi flag on a rooftop in the town. Other reports, however, said fighting still continued and that IS fighters remained in several areas.

Iraqi special forces entered Mosul last week and have made some progress in gaining a foothold on the city’s eastern edges. But progress inside the city has been slowed as troops push into more densely populated areas.

The troops are suffering casualties as the militants target them with suicide car bombs and booby traps in close-quarters fighting along the city’s narrow streets. ISIS still holds territory to the north, south and west of Mosul, its last major urban stronghold in Iraq.

In neighboring Syria, meanwhile, Kurdish-led Syrian fighters pushed ahead Monday with an offensive aimed at isolating and encircling the ISIS de facto capital of Raqqa, making small advances in villages to the north of the city. U.S.-led coalition warplanes provided air cover for the long-awaited campaign to liberate the city, which began Sunday.

Both battles are likely to be long and costly as the extremists are expected to fight until the end to try to hold onto their biggest urban strongholds in both countries.

Civilians were fleeing Mosul in growing numbers as Iraqi forces struggle to solidify gains in neighborhoods in the eastern part of the city, said special forces Lt. Col. Hussein Aziz.

“Daesh is trying to draw a line,” Aziz said of the heavy fighting in Mosul’s easternmost neighborhoods, referring to the militant group by its Arabic acronym. “They have a lot of fighters there and they forced families to stay.”

Aziz was manning a checkpoint on the edge of Gogjali, Mosul’s easternmost neighborhood, where civilians fleeing Mosul are screened to catch any ISIS fighters who may be hiding among them. Since Iraqi forces first pushed into the eastern edge of the city last Tuesday, Aziz’s team has arrested dozens of people.

At the checkpoint, men were waiting for their names to be screened by a pair of informants from the area and multiple Iraqi government databases. Women and children waited further back in the shade of an abandoned building.

Gayda, a 42-year-old Mosul resident, said she fled the Samah neighborhood in the city’s east just hours earlier, after a car bomb exploded next to her home. She gave only her first name, fearing for her safety and that of family members still under ISIS rule in other parts of Mosul.

When they reached the checkpoint, the woman’s husband and son were separated from her and her daughter, and held for questioning a few yards (meters) away.

Meanwhile, the World Health Organization said it has set up 82 “rapid response teams” to manage risks of epidemics, chemical exposure and other health worries among people fleeing Mosul.

The U.N. agency said water and sanitation in camps for the displaced could face disruptions as the number of people fleeing the city grows, raising the risk of food- and water-borne diseases such as cholera. It also said that additional concerns include children who reportedly haven’t been immunized since the radical ISIS seized control of Mosul in June 2014.