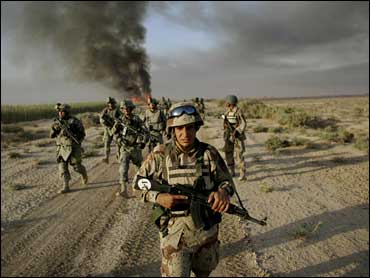 Iraq's foreign minister insisted Sunday that any security deal with the United States must contain a "very clear timeline" for the departure of U.S. troops. A suicide bomber struck north of Baghdad, killing at least five people including an American soldier.

Foreign Minister Hoshyar Zebari told reporters that American and Iraqi negotiators were "very close" to reaching a long-term security agreement that will set the rules for U.S. troops in Iraq after the U.N. mandate expires at the end of the year.

Zebari said the Iraqis were insisting that the agreement include a "very clear timeline" for the withdrawal of U.S.-led forces, but he refused to talk about specific dates.

"We have said that this is a condition-driven process," he added, suggesting that the departure schedule could be modified if the security situation changed.

But Zebari made clear that the Iraqis would not accept a deal that lacks a timeline for the end of the U.S. military presence.

"No, no definitely there has to be a very clear timeline," Zebari replied when asked if the Iraqis would accept an agreement that did not mention dates.

Differences over a withdrawal timetable have become one of the most contentious issues remaining in the talks, which began early this year. U.S. and Iraqi negotiators missed a July 31 target date for completing the deal, which must be approved by Iraq's parliament.

Last week, two senior Iraqi officials told The Associated Press that American negotiators had agreement to a formula which would remove U.S. forces from Iraqi cities by June 30, 2009 with all combat troops out of the country by October 2010.

But U.S. officials insist there is no agreement on specific dates. Both the American and Iraqi officials spoke on condition of anonymity because the talks are ongoing. Iraq's Shiite-led government believes a withdrawal schedule is essential to win parliamentary approval.

American officials have been less optimistic because of major differences on key issues including who can authorize U.S. military operations and immunity for U.S. troops from prosecution under Iraqi law.

The White House said discussions continued on a bilateral agreement and said any timeframe discussed was due to major improvements in security over the past year.

"We are only now able to discuss conditions-based time horizons because security has improved so much. This would not have been possible 18 months ago," White House spokesman Gordon Johndroe said Sunday. "We all look forward to the day when Iraqi security forces take the lead on more combat missions, allowing U.S. troops to serve in an overwatch role, and more importantly return home."

Iraq's position in the U.S. talks hardened after a series of Iraqi military successes against Shiite and Sunni extremists in Basra, Baghdad, Mosul and other major cities.

Violence in Iraq has declined sharply over the past year following a U.S. troop buildup, a Sunni revolt against al Qaeda in Iraq and a Shiite militia cease-fire.

But attacks continue, raising concern that the militants are trying to regroup.

The suicide bomber struck Sunday afternoon as U.S. and Iraqi troops were responding to a roadside bombing that wounded an Iraqi in Tarmiyah, 30 miles north of Baghdad, the U.S. military said.

No group claimed responsibility for the blast but suicide bombings are the signature attack of al Qaeda in Iraq.

"This was a heinous attack by al Qaeda in Iraq against an Iraqi family, followed by a cowardly attack against innocent civilians, their security forces and U.S. soldiers," Stover said.

Ethnic tensions have been rising in northern Iraq amid disputes between Kurds, Turkomen and mostly Sunni Arabs over Kurdish demands to annex the oil-rich city of Kirkuk into their self-ruled region.

Sawarah Ghalib, 25, who was wounded in the blast, said he believed military operations under way south of the city in Diyala province had pushed insurgents into the Khanaqin area.

"I did not expect that a terrorist attack to take place in our secure town," Ghalib said from his bed in the Khanaqin hospital. "Al Qaeda is to blame for this attack. Operations in Diyala have pushed them here."

In Baghdad, six people were killed in a series of bombings on the first day of the Iraqi work week.

The deadliest blast occurred about 8:15 a.m. in a crowded area where people wait for buses in the capital's mainly Shiite southeastern district of Kamaliya. Four people were killed, including a woman and her brother, and 11 others wounded, according to police.

A car bomb later exploded as an Iraqi army patrol transporting money to a state-run bank passed by in Baghdad's central Khillani square, killing two people including an Iraqi soldier and wounding nine other people, a police officer said.

Another Iraqi soldier was killed and five were wounded by a car bomb in Salman Pak, about 25 kilometers south of Baghdad, police said.