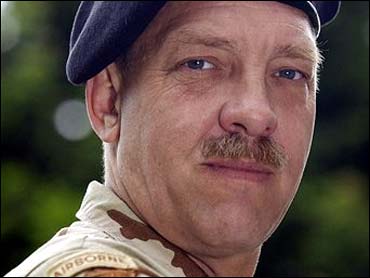 Nearly every day he was in Iraq, Army Staff Sgt. Steven Cummings would get so shaken by mortar round explosions that, even now, a year after his return home, he drops to the ground at the crackle of lightning.

Iraq had a big impact on Cummings in another way — his finances. In his absence, his wife took out two mortgages on their home in Milan, Mich. They fell $15,000 in debt, as the pay Cummings earned during his 14 months overseas was less than he had made as a civilian electrical controls engineer.

Looking back, those almost seem like the good times.

Cummings has been laid off from two jobs in the year since he left Iraq. While other reasons were given for the layoffs, Cummings thinks both were related to his duty in the Michigan National Guard and the time off it requires.

Like some other veterans who have returned from Afghanistan and Iraq, he is struggling to find work.

"I don't know what I'm going to do now. I'm in the exact position I was when I came back from Iraq," said Cummings, a father of two. "I'm 50 years old and I have a mortgage payment due. I'm tired of it."

Although many employers take pride in hiring veterans and make up any pay an employee lost while deployed, some are reluctant to hire reservists and Guard members who might have to deploy again, said Bill Gaul, chief officer at Destiny Group, an online organization that seeks to match employers and veterans.

Almost 490,000 troops from the Guard and reserve have mobilized since Sept. 11, 2001, overseas or for duty in-country. Of those, about 320,000 have completed their mobilization.

The number of unemployed Guard members and reservists who served in Iraq is unclear because the Labor Department will not begin gathering data specifically on post-Sept. 11 veterans until August. The unemployment rate for veterans of all wars was 4.6 percent last year, the department said, compared with an overall unemployment rate of 5.5 percent.

Rep. Allyson Schwartz, D-Pa., and Rep. Joe Schwarz, R-Mich., are co-sponsoring legislation that would give companies up to $2,400 in tax credits for each veteran from the Afghanistan and Iraq wars they hire.

That could be a "mini-windfall" for a small company, said Schwarz, a Vietnam veteran. "It will make a difference."

The lawmakers said their proposed tax credit also would be extended to companies that hire dependents of soldiers who died in combat and the spouses of those in the Guard and Reserves who deployed longer than six months.

"This is a way to give respect to our servicemen and women who have served," said Schwartz, daughter of a Korean War veteran.

There are laws designed to protect the civilian jobs of deployed Guard and reserve troops, but some still come home unemployed if their companies skirt the law or cut jobs for other reasons, such as the closure of a business.

Others looking for work were unemployed when they left or they are coming off active military duty and entering the civilian job market for the first time.

Some are changed by war, and find their old civilian jobs have become less meaningful.

That was the case with Army Cpl. Vicki Angell, 32, who gave up her job as a customer service supervisor for an equipment company to serve in Iraq with the 324th Military Police Battalion out of Chambersburg, Pa. Upon her return in 2004, it took a year for Angell to find satisfactory work. She is now an editor at The Sheridan Press in Hanover, Pa.

"You send out a lot of resumes. You try to do everything you can do, but it's really hard to account for the time you are in Iraq, and really to try to make that, the things you were doing in Iraq, relevant to what an employer is looking for today," Angell said.

Army Sgt. Benjamin Lewis, 36, a civilian chef in Ann Arbor, Mich., lost his job when the restaurant where he worked burned down while he was in Iraq with the Michigan National Guard. He said some potential employers told him they could not hire him because he might be deployed again and would need weekends and time off in the summer for drills.

Others asked if he struggled mentally because of his time at war, Lewis said. He got so desperate he considered returning to Iraq with a new unit. Ultimately, he found work at a restaurant that is flexible and supportive of his military service.

"I was pretty frantic in the end," Lewis said. "It was almost a year without a job."

Cummings, a member of the 156th Signal Battalion who did telecommunications work in the Iraqi cities of Baghdad and Mosul, thought he was returning to Gentile Packaging Machinery Co., where he worked for 11 years in Bridgewater, Mich. However, the first day he was back at work, he was laid off, he said.

Anthony Gentile, director of marketing for Xela Pack Inc., a sister company of Gentile Packaging Machinery in Saline, Mich., said the company had just four workers and three were laid off because production slowed down after the Sept. 11 terror attacks.

"He was notified when he was back because the whole time he was gone we were hoping we'd have work for him," Gentile said.

Cummings said he considered suing to get his job back. "Everybody told me to go after the guy. I thought, you know what, if he's going to go after me, I don't want to work for him," Cummings said.

A few months later, a veterans program helped Cummings find work at Superior Controls Inc., in Plymouth, Mich. He was laid off from that job May 20. He said he was told the company was downsizing.