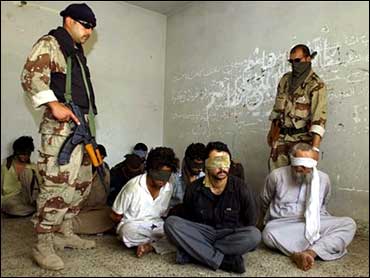 Meanwhile, Saddam Hussein's morale has plummeted as the gravity of the war crimes charges he faces sinks in, according to the judge who will oversee his trial.

The Iraqi man, known as Mullah Mahdi, was detained with his brother, and four others following a brief clash in eastern Mosul, said Iraqi army Maj. Gen. Khalil Ahmed al-Obeidi.

Al-Obeidi said the terror suspect was affiliated with the Ansar al-Sunnah Army, one of Iraq's most feared terror groups, and links to the Syrian intelligence service.

"He was wanted for almost all car bombs, assassinations of high official, beheadings of Iraqi policemen and soldiers and for launching attacks against Multi-National Forces," al-Obeidi said.

Iraqi and U.S. soldiers also kept up their pressure against suspected insurgents south of Baghdad, with more than 800 troops, mainly Iraqis, cordoning off districts in Latifiyah, a city in an especially violent region dubbed the Triangle of Death.

The U.S. military believes insurgents behind almost daily deadly attacks in Baghdad use districts on its southern edge as staging areas.

"For two years I have been suffering from these terrorists, now it is my time," Brig. Gen. Mohammed Essa Baher, an Iraqi army commander from the region whose two sons had been killed by insurgents, said on the eve of Saturday's offensive.

On Friday, the Association of Muslim Scholars, an influential Sunni group with ties to some insurgents, called for an end to a weeklong counterinsurgency offensive in Baghdad, saying it overwhelmingly targets members of their religious minority and has led to the detention of hundreds of people.

The interior minister has said at least 700 suspected insurgents have been rounded up in the sweep, known as Operation Lightning, which also has killed 28 militants.