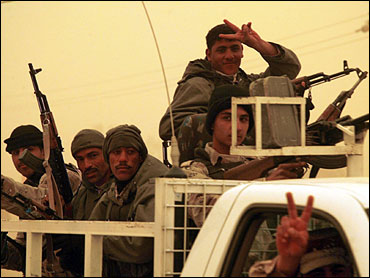 
Coming up on the 4th anniversary of the war in Iraq, it no longer seems worth the effort to argue about who made what mistakes. The relevant question now is the one General David Petraeus asked in the opening days of the invasion – "tell me how this ends."

It is one of history's minor ironies that as the new commander in Iraq, Petraeus is now in charge of answering his own question. He is pursuing a classic counterinsurgency strategy – a surge of troops to protect the citizens of Baghdfad from violence and buy time for the Iraqi government to get its act together. But as both U.S. intelligence and the Pentagon now acknowledge, this is not a classic insurgency.

It's also a civil war between Shiite and Sunni and neither side has an Abraham Lincoln preaching malice toward none and charity toward all. (Even with Lincoln, the Civil War didn't end until one side was defeated.)

You can get as many opinions as there are experts about how it ends. One government official I spoke to, who admits he's more pessimistic than many of his colleagues, predicts an outcome which is not in America's best interest, even if the surge succeeds in reducing violence. That would be a tactical success, he says, but it would not translate into a strategic success since it would result in a Shiite-dominated government at odds with its Sunni neighbors (America's Arab allies) and accommodating to Iran.

The future of Iraq depends not on the American military but on the ability of Shiite and Sunni politicians to compromise. The record to date is not encouraging. At the very least, it will take longer than expected, and the longer it takes, the longer U.S. troops will be stuck in Iraq – unless, of course, Congress throws in the towel and cuts off funding for the war.

No decisions have been made yet, but you can bet on two things. One, President Bush is not going to order a pull out as long as he remains in office. Two, the surge will be extended into 2008 to buy the Iraqi government still more time.

The "long hard slog" scenario remains the most likely course. Slowly, too slowly, the Iraqi army and police will replace American troops on the front lines and the U.S. can begin a pull-back, first to secure bases inside Iraq and then out of the country. But for the foreseeable future, five to ten years, American soldiers and Marines will be fighting and dying in Iraq.
"Tell me how this ends?"

It doesn't. It just grinds on with fewer troops and fewer casualties – sort of like Afghanistan.