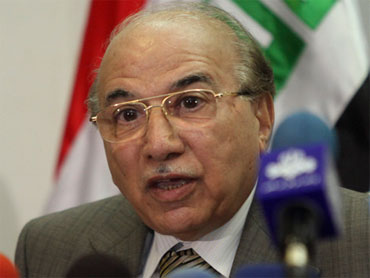 The televised announcement by the court's top judge marked the first major step toward resolving Iraq's election crisis and the seating of a new parliament. But the government impasse remains far from over, and it could still take weeks, perhaps months, before lawmakers elect new leaders.

The March vote left the country without a clear winner, as none of Iraq's major political coalitions won an outright majority in the 325-seat legislature.

The confusion has led to nearly three months of ballot recounts, charges of fraud and court challenges, nearly all of which brought by the State of Law alliance led by Prime Minister Nouri al-Maliki.

In announcing the ruling Tuesday, judge Midhat al-Mahmoud called the vote results submitted May 26 by the Independent High Electoral Commission "reliable." Based on that, he said, "we decided to ratify the final results of the general parliament elections for 2010," he told a news conference at the Supreme Court.

Iraq's next government will oversee the departure of U.S. troops from Iraq. The number of American forces is due to shrink to about 50,000 by the end of August. A security agreement requires all U.S. troops to leave by the end of 2011.

Many Iraqis - as well as U.S. and U.N. officials - have expressed frustration with the legal wrangling that has delayed the court's final election approval.

According to the Iraqi constitution, President Jalal Talabani now has 15 days to call parliament to its first session, where lawmakers could vote to elect a speaker and a president of the republic.

The new president will have another 15 days to declare the largest power bloc, based on the number of seats it holds. The new bloc will in turn name the next prime minister and proceed to piece together a new government.

The bloc that is selected to form the government - a process that could take months - will be able to reward allies with Cabinet seats and top government jobs.

However, in a March 25 legal opinion, the Supreme Court left open the question of whether the biggest bloc would be that which won the most seats in the March vote, or if it could be one formed after the balloting.

It's expected that Iraqiya and the super-Shiite coalition will now battle over which should be legally considered the largest bloc in parliament - a fight that could be drawn out.

In a statement, the U.S. Embassy in Baghdad called Tuesday's court ruling "an important step in the right direction as Iraq undertakes what will be a historic and peaceful transition of power from one elected government to another."

"Now is the time for all political leaders to come together to put the interests of the Iraqi people foremost in their negotiations over the makeup of the new government," the Embassy statement said.