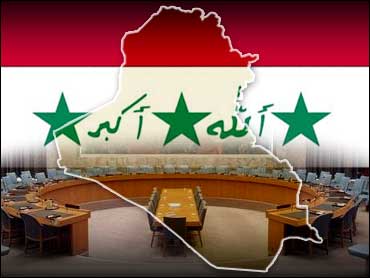 Many Arab countries withdrew their ambassadors from Iraq shortly after Saddam Hussein invaded Kuwait in 1990, causing a deep rift between Iraq and its neighbors.

Iraqi Prime Minster Ibrahim al-Jaafari, speaking at an international conference on his nation's reconstruction, urged other countries to upgrade their ties.

Iraqi Foreign Minister Hoshyar Zebari announced that Egypt would be the first Arab country to upgrade its diplomatic representation by appointing an ambassador.

Zebari praised Egypt for "showing regional leadership by taking the decision to appoint the first Arab ambassador we hope to soon welcome in the new Iraq."

Ihab al-Sherif, Egypt's newly appointed envoy to Iraq, arrived in Baghdad on June 1. It's not clear if al-Sherif will be upgraded to ambassador.

Egypt withdrew its ambassador in 1991 when it backed the U.S.-led alliance against Saddam, after he invaded Kuwait.

In 1996, Egypt restored trade ties when the United Nations started its oil-for-food program. Following the U.S.-led war on Iraq in 2003, Egypt, like many Arab countries, sent an envoy and small mission to look after Egyptian workers in Iraq.

Zebari said he was hopeful full diplomatic ties could be restored with both Saudi Arabia and Kuwait. He described relations with them as being "good and very positive."

He added that Iraq asked the two countries to forgive some or all of Iraq's debts and readdress compensation for victims of Iraq's 1990 invasion of Kuwait.

"The Iraqi people are not responsible for the mistakes of Saddam," he told the Associated Press on Tuesday.

Al-Jaafari told reporters that the secretary general of the Arab League, Amr Moussa, will visit Iraq at the end of the month. Moussa was a fierce critic of Washington's decision to oust Saddam and has demanded quick withdrawal of foreign troops from Iraq.

The Iraqi premier also said the Arab League will reopen its mission in Baghdad and send a group of Arab experts to help draft the constitution.

Also at the conference, Jordanian Foreign Minister Farouk Kasrawi announced his country would be sending an ambassador to Iraq "very soon," but did not give a date. Jordan withdrew its ambassador before Saddam's fall.

Jordan's embassy in Baghdad was targeted in August 2003 by a car bomb that killed 19 people. Following that attack, Iraqis stormed the Jordanian Embassy and raised an Iraqi flag on its roof.