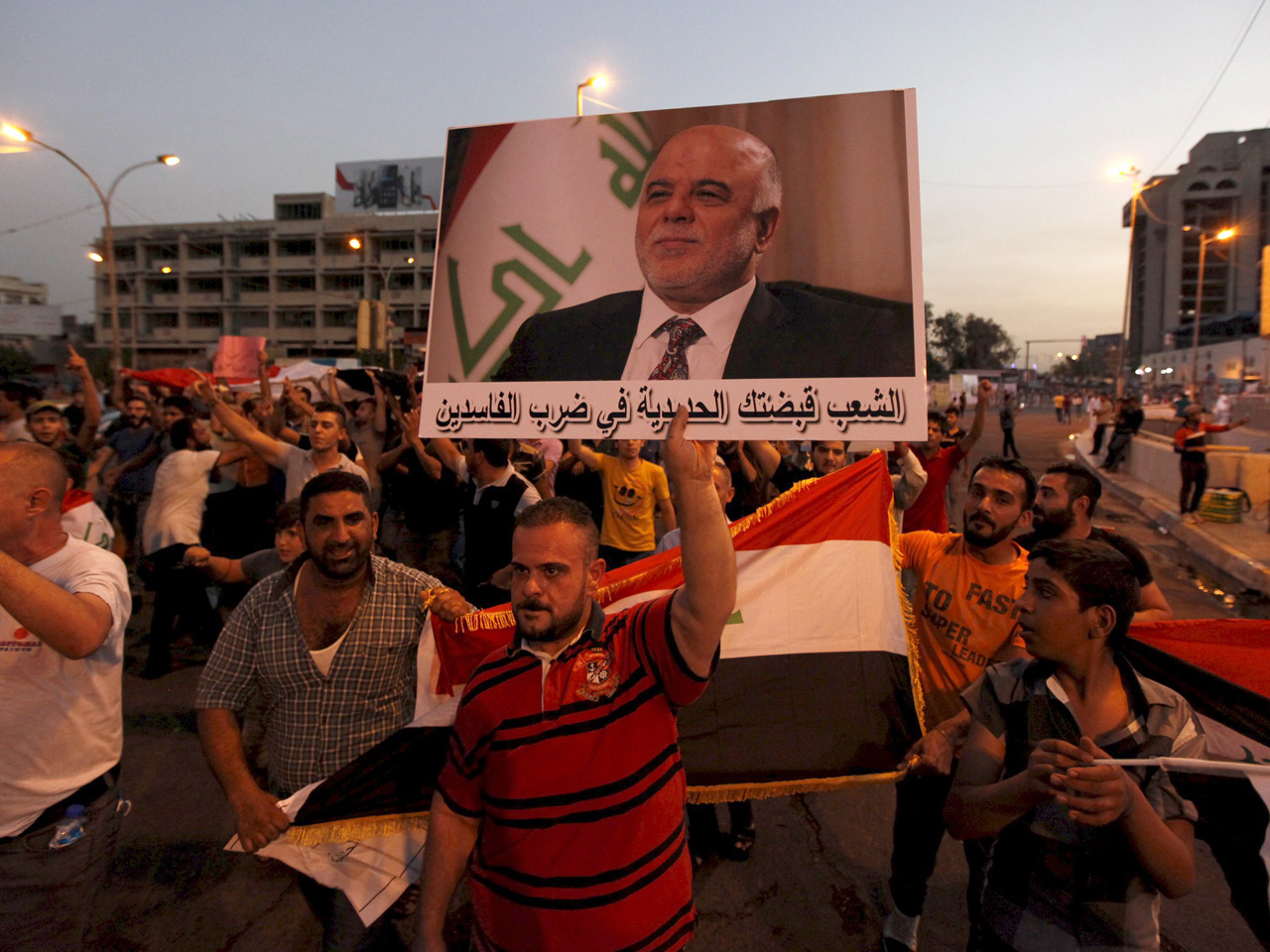 BAGHDAD - Iraq's prime minister unveiled a bold plan Sunday to abolish three vice presidential posts and the offices of three deputy premiers, hoping to cut spending amid mass protests against his government as the Islamic State of Iraq and Syria (ISIS) still holds a third of his nation.

Prime Minister Haider al-Abadi's Cabinet backed the plan, which still needs parliamentary approval, but it's unclear whether it could end the endemic corruption in Iraq's political system, where many senior appointments are determined by party patronage and sectarian loyalties.

The plan also effectively would push out of government former Prime Minister Nouri al-Maliki, widely criticized for inflaming sectarian tensions and appointing loyal, less-qualified senior officers to Iraq's military ahead of ISIS' advance last year. While al-Maliki issued a short statement approving of the proposed plan, he previously criticized al-Abadi's rise to power last year and repeatedly has urged the current government to address the country's corruption and sectarian crises.

Al-Abadi's seven-point plan would dismantle portions of the top-heavy government created in the wake of the 2003 U.S.-led invasion that toppled dictator Saddam Hussein. It would reduce spending on personal bodyguards for officials and transfer the responsibility to the interior and defense ministries. The plan also calls for the review of all corruption cases by a committee of experts, with fresh trials for officials suspected of wrongdoing.

About a thousand demonstrators gathered late Sunday in support of al-Abadi in Baghdad's Tahrir Square. Despite near-daily bombings and attacks in Baghdad, the square has been the scene of peaceful protests in recent days over frequent power cuts during a heat wave that has seen temperatures reach as high as 52 degrees Celsius (125 degrees Fahrenheit).

The mass demonstrations even include Iraq's Shiite majority, from which the government draws most of its support. That shows the level of anger among Iraqis in a country ranked 170 out of 175 on Transparency International's 2014 Corruption Index. A 2013 United Nations report found that half a million Iraqi citizens paid 1.9 million bribes to civil servants over the course of a year, mostly for power and water services.

But the anti-corruption drive received a push two days ago when Iraq's most revered Shiite cleric, Grand Ayatollah Ali al-Sistani, called on al-Abadi to quickly address internal issues in the government, including corruption. Through his spokesman, Ahmed al-Safi, al-Sistani said the prime minister must be more "daring and courageous" in his steps to reform the government, urging him to strike "with an iron fist anyone who is tampering with the people's money."

That's similar to the pledge al-Abadi made Aug. 10, 2014, when he was named premier-elect. The Islamic State group already seized control of a third of Iraq and the U.S. had just begun targeting the extremists with airstrikes.

But despite seizing Saddam's hometown of Tikrit and some areas, the advance of Iraqi forces has waned. Efforts to win back the western cities of Fallujah and Ramadi have stalled. Operations to recapture Iraq's second-largest city, Mosul, have been postponed indefinitely. Kurdish forces, meanwhile, have made modest advances in Iraq.

"The winners from those airstrikes are the Kurds, not the Iraqi fighters who are battling the Islamic State group militants in Salahuddin and Anbar provinces," said Hadi Jalu, an analyst who is also president of the Journalistic Freedom Observatory.

Iraq, which holds the world's fifth largest oil reserves and significant amounts of gas, has struggled to finance its war with ISIS due to lower oil prices and high military spending. The consequences have manifested over al-Abadi's year in office, with the fallout ranging from worsening electricity problems to the government's failure to keep up with budget payments to the semi-autonomous Kurdish government.

"He had a good six months," said Sajad Jiyad, a senior researcher at al-Bayan Center for Studies and Planning in Baghdad. "He struck the deal with the (Kurdish Regional Government), got an austerity budget passed within a short amount of time, ... took back Tikrit, lifted the curfew from Baghdad, made some changes from the defense and interior ministry, got some guys kicked out.

"The six months after have been downhill," Jiyad added. "They lost Ramadi, austerities really started to bite, electricity got worse and worse, oil prices have taken another tumble and people in (oil-rich) Basra are asking, 'What are we getting out of all of this?'"

While people publicly may support reform, al-Abadi's plan noticeably pushes his predecessor, al-Maliki, out of office, as well as Ayad Allawi, a former member of Saddam's Baathist government who was named prime minister following the 2003 invasion.

Al-Maliki, who served as prime minister from 2006 until the middle of last year, was widely accused of monopolizing power. He also was seen as a sectarian leader who did much to alienate the country's Sunni minority, including using security forces to break up their protests. When ISIS captured Mosul and other cities last summer, many Sunnis there initially welcomed the extremists as liberators.

Al-Maliki expressed initial support for the proposed reforms in a brief statement on his website, without addressing losing his own position in power. When Iraqi President Fouad Massoum named al-Abadi as premier-elect last year, al-Maliki described it as a "dangerous violation" of the constitution, demanding a third term since his political bloc received the most votes.

While al-Maliki's influence has waned, he remains a powerful figure in Iraqi political life, as was evident from the significant showing of his own supporters in Tahrir Square on Friday, joining in the call for change.