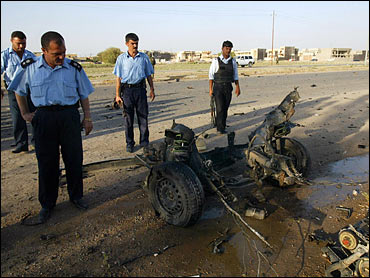 However, the U.S. military says only about 30 people were killed, reports CBS News chief foreign correspondent Lara Logan. The attack happened so far north of Baghdad, in such a remote desert region, that it's very difficult to get exact information.

If the Iraqi count is right, this would be the highest death toll in a concerted attack since Nov. 23, when 215 people were killed by mortar fire and five car bombs in Baghdad's Shiite enclave of Sadr City.

The Yazidis are part of a tiny minority, with only about 500,000 people left in the world, reports Logan. The ancient, primarily Kurdish, religious sect worships an angel figure some that Christians and Muslims believe to be the devil.

Al-Shimiri and Ahmed said at least 30 homes were destroyed in the bombings.

Dhakil Qassim, mayor of Sinjar, a town near where the attacks occurred, said al Qaeda in Iraq was behind the bombings, citing what he said were Kurdish government intelligence reports.

"This is a terrorist act and the people targeted are poor Yazidis who have nothing to do with the armed conflict," Qassim said. "Al Qaeda fighters are very active in this area near the Syrian border."

U.S. helicopters swooped into the area to evacuate the wounded to hospitals in Dahuk, a Kurdish city near the Turkish border about 60 miles north of Qahataniya.

Elsewhere on Tuesday, a U.S. transport helicopter crashed near an air base west of Baghdad, killing five troops, the military said.

The CH-47 Chinook helicopter was conducting a routine post-maintenance test flight when it went down near Taqaddum air base, said 1st Lt. Shawn Mercer, a Marine spokesman.

He said emergency response crews had sealed off the site and the cause was still under investigation. A military statement later said five American service members were killed in the crash.

The deaths raised to at least 3,700 members of the U.S. military who have died since the Iraq war started in March 2003, according to an Associated Press count.

The air base is about 45 miles west of Baghdad in restive Anbar province, a Sunni insurgent stronghold that has become calmer in recent months as tribal leaders have joined forces against al Qaeda in Iraq.

In Baghdad, Abdel-Jabar al-Wagaa, the senior assistant to Oil Minister Hussain al-Shahristani, was spirited away by more than 50 gunmen wearing security forces uniforms and driving what were believed to be military vehicles, said Assem Jihad, the oil ministry spokesman.

An Interior Minister official, speaking anonymously because he was not authorized to release the information, said a top official in the State Oil Marketing Organization and three directors general in the operation also were kidnapped.

The official said five bodyguards were wounded in the raid on the State Oil Marketing Organization complex in eastern Baghdad.

Five Britons were seized May 29 in a similar raid on Iraq's Finance Ministry, not far from the oil marketing office. They were taken by gunmen wearing police uniforms and have not been found.

Both government organizations are near the lawless Sadr City Shiite enclave, a stronghold of the Mahdi Army militia.

The raid also was reminiscent of an attack by Mahdi Army fighters, dressed as Interior Ministry commandos, who stormed a Higher Education Ministry office Nov. 14 and snatched away as many as 200 people. Dozens of those kidnap victims were never been found.

Jihad said the kidnappers Tuesday were an "armed gang" and took the deputy minister from his home in the compound. He said the gunmen stole a number of cars from the compound, most of them belonging to the marketing organization.