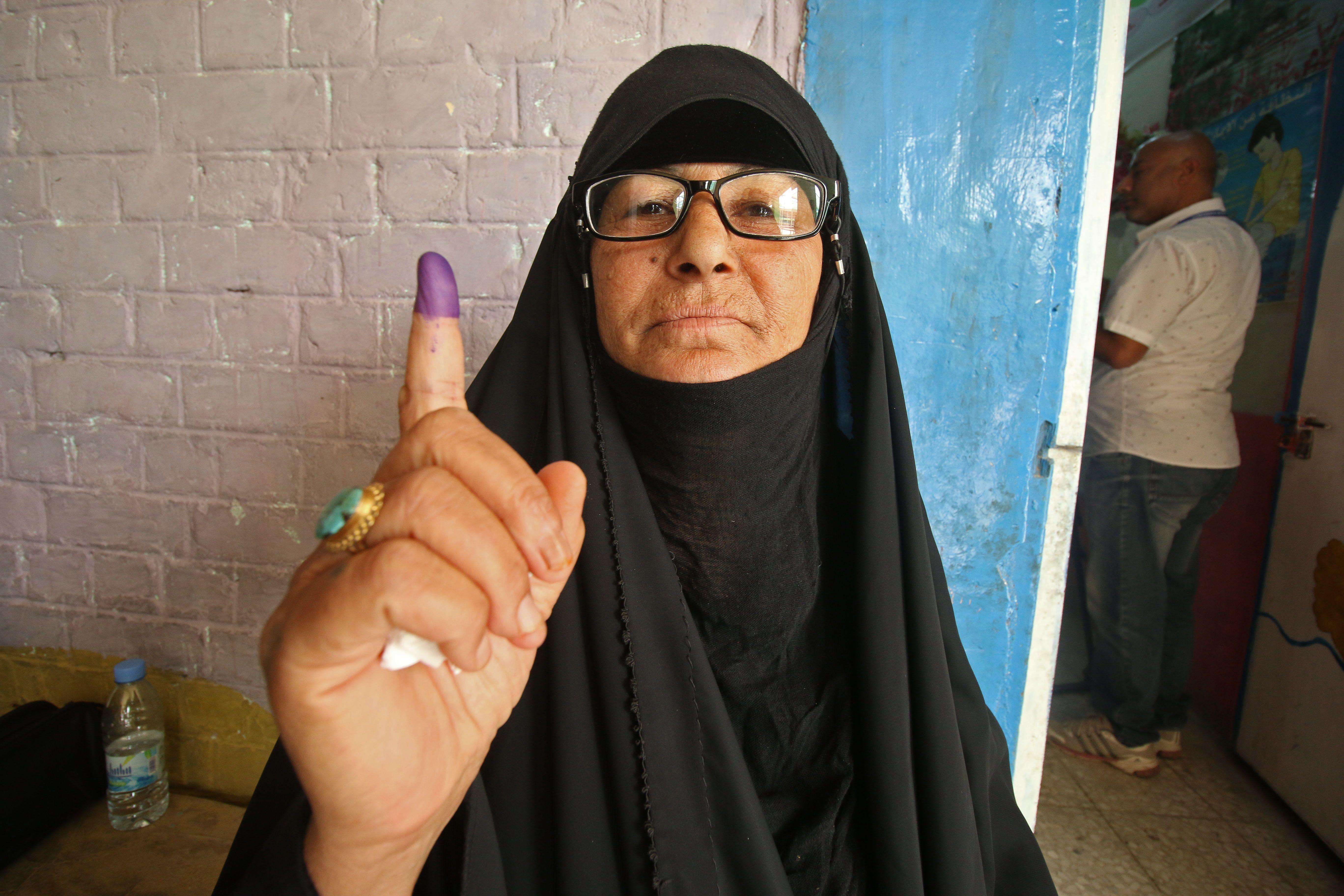 BAGHDAD -- Polls closed across Iraq Saturday evening in the first national election since the country declared victory over the Islamic State of Iraq and Syria (ISIS). The vote -- the fourth since the 2003 U.S.-led toppling of Saddam Hussein -- was marked by reports of low turnout and irregularities.

Results are expected within the next 48 hours, according to the independent body that oversees Iraq's election, but negotiations to choose a prime minister tasked with forming a government are expected to drag on for months.

Baghdad's streets began to fill up with cars before voting concluded Saturday evening after al-Abadi partially lifted a security curfew in an effort to improve turnout. Nearly all civilian vehicles had been banned from Baghdad's streets Saturday morning and many voters complained of having to walk more than 2.5 miles to reach polling stations.

Iraq's most senior Shiite cleric spoke out on the issue of voter participation Saturday afternoon, encouraging Iraqis to vote "to prevent the arrival of a corrupt parliament."

"The lack of participation will give the opportunity for others to reach parliament and they will be very far from the aspirations of the people," said Sheikh Abdul-Mahdi al-Karbalai, the representative of Grand Ayatollah Ali al-Sistani, on local Iraqi television from Karbala. Sistani has repeatedly encouraged Iraqis to vote into power Saturday a new political class to combat corruption.

In Mosul, turnout appeared to be higher with over 40 percent of eligible voters casting their ballots at polling stations across the city, according to the deputy commander of Nineveh operation command, Brig. Gen. Jassem Mohammed Khalil.

For those who did attempt to vote, some in Baghdad complained of voting irregularities at polling stations linked to a new electronic voting system implemented for the first time this year in an effort to reduce fraud.

Nouri al-Maliki, al-Abaid's predecessor and arguably his most powerful opponent, said he was aware of "violations" at some polling stations in Iraq, adding that the process lacked proper oversight.

"We are not reassured," al-Maliki told the Associated Press in a phone interview.

Thamer Aref, 45, along with his wife and daughter were turned away from a polling station north of central Baghdad.

Aref had turned in his old voter ID card months ago for the biometric identification card required by the new system. However, Aref's biometric card wasn't ready ahead of Saturday and, with neither card, the polling station did not allow him to a cast a ballot.

Associated Press journalists documented several similar cases at a number of different polling stations across Baghdad Saturday morning. Amira Muhammed, the supervisor of a polling station in Azamiyah, Baghdad, said some people couldn't vote because they did not pick up their new biometric ID cards in time.

"The problem is not with us," she said.

"There were some problems with the electronic equipment due to misuse by some employees," Hazem al-Ridini told the AP.

In central Baghdad, voters supporting al-Abadi said they are doing so because they give him credit for Iraq's military victory over ISIS. Al-Abadi "took revenge" for civilians killed in insurgent attacks in Iraq "with the victory over Daesh," said 71-year-old Felihah Hassan, using the Arabic acronym for ISIS.

After ISIS overran nearly a third of Iraq in the summer of 2014, the group launched waves of suicide bombings targeting civilians in Baghdad and other pockets of government-controlled territory.

With support from the U.S.-led coalition and Iran, al-Abadi oversaw a grueling war against the extremists and declared victory over the group in December.

Despite al-Abadi's military achievements, Iraq continues to struggle with an economic downturn sparked in part by a drop in global oil prices, entrenched corruption and years of political gridlock. Many in Iraq are disillusioned by a weak economy, as well as widespread government corruption, BBC News reports.

The vote also comes days after President Donald Trump announced the U.S. is withdrawing from the Iran nuclear agreement, and some Iraqis fear their country could become a victim in any struggle between Iran and the U.S.

In addition to al-Maliki, al-Abadi's most powerful competition is from an alliance of candidates with close ties to the country's powerful, mostly Shiite paramilitary forces, and an alliance led by influential Shiite cleric Muqtada al-Sadr.

Jassim Mohsen, 58, who fought against ISIS with the paramilitary forces, said he's casting his vote for the alliance with paramilitary ties because of their personal sacrifices.

"I elected the Fatah list because they are the only ones who fought Daesh and gave blood," he said.

Some Sunnis voting Saturday said they are hopeful this election will help Iraq move beyond sectarian politics and become more inclusive.

Marginalization of Iraq's Sunnis under al-Maliki is seen as a factor that allowed ISIS to rise in power in Iraq. Al-Abadi has led a more cross-sectarian government marked by his ability to balance the interests of his two allies often at odds: the U.S. and Iran.

The war left more than 2 million Iraqis, mostly Sunnis, displaced from their homes, with cities, towns and villages suffering heavy destruction. Repairing infrastructure across Anbar and Nineveh provinces, both majority Sunni areas, will cost tens of billions of dollars.

Abdulrazaq Kubi and his wife Suheila Mahdi, both Sunnis from Baghdad, said they would not be voting for al-Abadi, casting their votes instead for a Sunni-led political alliance.

"The victory is not 100 percent, there is still Daesh here," said Mahdi. The government "is neglecting the refugees because they are Sunni. They left them in the camps, in the winter it floods, in the summers, they go hungry," she added.

In total there are 329 parliament seats at stake, with nearly 7,000 candidates from dozens of political alliances.

Iraq's constitution allows lawmakers more than three months after the ratification of the election results to form a government. But many expect the process to drag on for much longer if there is no clear winner, as dozens of political parties attempt to cobble together a political bloc large enough to hold a majority of seats in parliament.