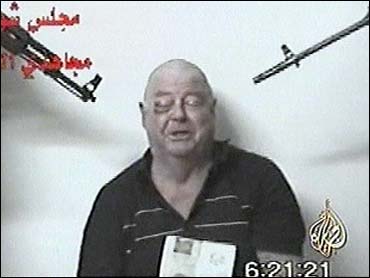 A man wearing a belt packed with explosives killed at least 26 Iraqi soldiers and wounded 26 others on Wednesday when he blew himself up inside a restaurant on an Iraqi army base north of Baghdad, army officials said.

There were no details available on the operation in Baghdad that led to the release of Douglas Wood, a 64-year-old engineer and resident of California, who was abducted in late April by a militant group calling itself the Shura Council of the Mujahedeen of Iraq.

Al-Obeidi said the man was wearing an army uniform and waited until soldiers had gathered for lunch before blowing himself up. The soldiers belonged to the Al-Salam battalion of the 2nd brigade of the Iraqi army in Diyala province.

The Australian government had refused to bend to the kidnappers' demands but immediately sent a team of diplomats, police and military personnel to Baghdad to seek his release.

"Mr. Wood was recovered a short while ago in Baghdad in a military operation that I am told was conducted by Iraqi forces in cooperation in a general way with force elements of the United States," Prime Minister John Howard told Australia's Parliament on Wednesday.

"He's now under the protection of the Australian emergency response team in Baghdad," Howard told parliament. "I understand that he is well, he's undergoing medical checks at the present time."

Police battled with and killed two gunmen in the oil-rich northern city of Kirkuk early Wednesday, a day after a suicide bomber killed 23 people and wounded nearly 100 after striking outside a bank as retirees waited to cash their pension checks.

Kirkuk has become a flashpoint for sectarian tension and Tuesday's violence was the worst to hit the ethnically mixed city, 180 miles north of Baghdad, since the war started in March 2003.

There was more bloodshed in central Kirkuk early Wednesday when police killed two gunmen who fired on their patrol from a speeding car, police Col. Burhan Taha said. A third militant was captured and two police were wounded during the gunfight.

Insurgents have routinely launched deadly attacks in Kirkuk with the apparent aim of creating ethnic tension among the Kurdish, Sunni, Shiite and Turkmen population.

The latest bombing coincided with the swearing in of veteran Kurdish guerrilla leader Massoud Barzani as the first president of Iraq's northern Kurdistan region in nearby Irbil, 50 miles north of Kirkuk.

Kurds have long coveted Kirkuk as the capital of an autonomous Kurdish region encompassing all three of their northern provinces.

Saddam forced nearly 100,000 Kurds out of the city as part of an "Arabization" plan. The Shiite political parties that control the government have shied away from the issue of giving Kurds control of the city, saying that the central government would retain future control of its oil riches.

Prime Minister Ibrahim al-Jaafari, speaking in parliament after the Kirkuk attack, also accused the insurgents of targeting civilians — as the number of people killed by militants since the April 28 inception of his Shiite-dominated government hit at least 1,018 people, including U.S. forces.

"They are trying now to avoid the military areas, the areas controlled by the multinational or Iraqi forces and they are now conducting their operations in the markets," al-Jaafari told parliament shortly before a vote of confidence.

Al-Jaafari's 37-member government was overwhelmingly approved by a show of hands in the 275-member parliament. But the government has been criticized for its inability to stop insurgent attacks.