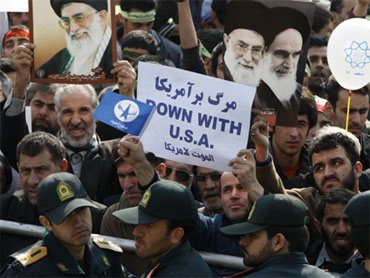 While President Mahmoud Ahmadinejad may be the public face of Iranian politics, make no mistake, Supreme Leader Ali Khamenei is the man in charge there. Khamenei is the Islamic Republic of Iran's spiritual leader and highest authority until he chooses to give up the post, dies, or is deposed. His veto is final in Iranian political affairs.

However, in an unusual public display of discord, Ahmadinejad has pushed back against Khamenei's authority in a dispute over the appointment of the country's intelligence chief. Khamenei has responded by telling the president to bend to his will or resign, according to several news outlets.

The dust-up is over the appointment of Heidar Moslehi as the intelligence minister. Ahmadinejad tried to fire Moslei from the intelligence post on April 17, but Khamenei reappointed him a few hours later, the BBC reports. Ahmadinejad then apparently spent nearly two weeks boycotting government meetings in protest.

After Ahmadinejad complained, Khamenei basically told him to accept the decision or resign, the Guardian reports.

Moslehi is an ally of the Supreme Leader, and the president's opposition to Moslehi apparently comes from a desire to have his friend and close confidant Esfandiar Rahim Mashaei replace him as president in 2013, the Associated Press reports. In order to do that, Ahmadinejad probably needs to get the disloyal intelligence minister out of the way.

Additionally, there have been rumors that Moslehi had been spying on Mashaei because the country's religious leaders do not trust his occasional pro-Western public statements, and that led to Ahmadinejad's move, the Los Angeles Times reports.

Despite more recent public displays of unity, the tension in Iran's political circles threatens Ahmadinejad's power. The Guardian writes that "clerics close to Khamenei have launched a campaign to highlight his role in Iranian politics, saying that to disobey him is equal to apostasy, as he is 'God's representative on earth.'"

The Los Angeles Times claims that "rivals of Ahmadinejad clearly smell blood and have spoken out against him and launched an impeachment drive in parliament."

Additionally, hard-line authorities have arrested up to 25 people loyal to Ahmadinejad and Mashaei in recent days and blocked half a dozen websites allied to them, the AP reports.

Amid incredible upheaval throughout the Middle East, this discord at the top of Iran's political circles may have far wider reaching effects than they would during quieter times.