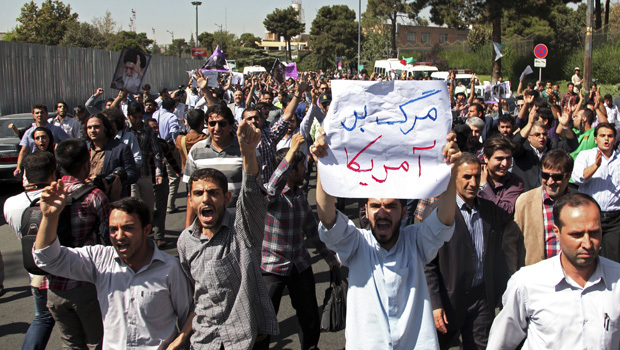 TEHRAN, Iran Iranians chanted "Death to America" and burned the U.S. flag after weekly prayers in Tehran on Friday despite their new president's outreach to the West and promises of moderation and easing of tensions with the outside world.

The chants, customary after Friday services in the Iranian capital, reflect the challenges facing President Hassan Rouhani as he tries to build on the groundbreaking exchanges with Washington that included atelephone chat last week with President Barack Obama - a gesture aimed at ending three decades of estrangement between the two countries.

Rouhani's overtures have been hailed by both Iranian reformists and the country's conservative clerical leadership.

But a wide array of Iranian hard-linersopposes any improved contact with the Unites States. Diplomatic relations between the two were cut after the 1979 Islamic Revolution and the storming of the U.S. Embassy in Tehran, when militants held 52 Americans hostage for 444 days.

During prayers Friday in Tehran, the master-of-ceremonies led the crowd into chants of "Death to America" at least twice from the podium.

The chant was then repeated several times by a group of worshippers who rallied after the ceremony, burning the American and Israeli flags, as they do almost every week.

Juan Zarate, CBS News' senior national security analyst, said that any offer to resolve the dispute over Iran's nuclear program must specifically address the international community's concerns with the program and receive political backing in Tehran.

"This has to be backed by the clerical establishment and the supreme leader and the revolutionary guard, which controls the nuclear program," he told CBS News' State Department Correspondent Margaret Brennan. "That isn't clear to me yet, and I think a lot of observers are wondering whether or not first of all Rouhani can be believed but even if he can be believed whether he can deliver."

However, Ayatollah Kazem Sedighi, a cleric who led the prayers, tried to strike middle ground, saying that America and Iran should "join hands" in a struggle to overcome sanctions that have crippled Iran's economy.

Sedighi criticized Washington over the threat of new punitive measures against Iran and urged Obama to "come and work with" Rouhani in lifting the sanctions, which the cleric said had hurt not only people in Iran but also in the wider region, the U.S. and Europe.

Though Sedighi said Iran would not pull back from its "peaceful nuclear rights," he expressed hope that Rouhani's policies would "save the region and the world from a dead-end and a crisis."

Iran has faced repeated rounds of U.N. sanctions over its disputed nuclear program, which the West suspects is geared toward producing an atomic weapon. The country is also living under tough U.S.-led oil and banking sanctions that have slashed oil exports by half and shut Tehran out of the international financial system.

Tehran denies it wants nuclear weapons, insisting its nuclear activities are only for peaceful purposes such as power generation and cancer treatment.

In a visit to New York for the U.N. General Assembly last week, Rouhani agreed to restart nuclear talks with the five permanent members of the Security Council plus Germany in Geneva later this month.

Another speaker on Friday, Mohammad Hossein Saffar Harandi who is part of an advisory council to the Supreme Leader Ayatollah Ali Khamenei, said the U.S. decided to work things out with Iran through diplomacy because of the crisis it faces over Syria's conflict.

"But, honestly, we also need them," Harandi said, referring to Americans. "We would like to have an opening that would remove these oppressive sanctions."

When the crowd erupted into another "Death to America" chant, Harandi said: "I did not raise that slogan that you are chanting."