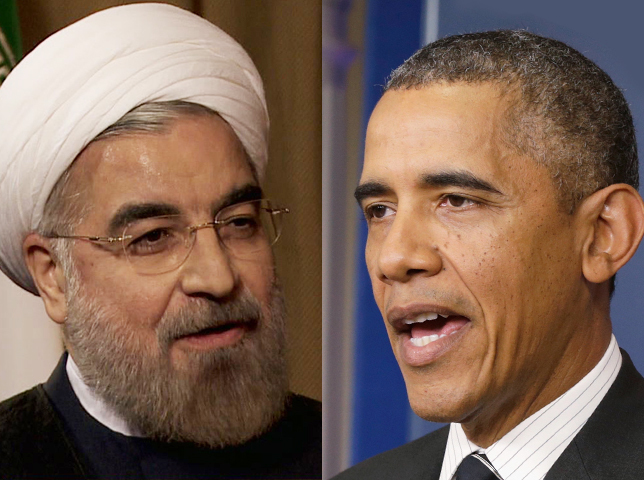 WASHINGTON President Obama and Iranian President Hassan Rouhani spoke by telephone Friday, the first conversation between American and Iranian presidents in more than 30 years. The exchange could reflect a major step in resolving global concerns over Iran's nuclear program.

Mr. Obama told reporters at the White House that he had a constructive conversation with the Iranian leader.

"While there will surely be important obstacles to moving forward and success is by no means guaranteed, I believe we can reach a comprehensive solution," he said.

Mr. Obama said he and Rouhani have directed their teams to work quickly to pursue an agreement. He said the U.S. will coordinate closely with its allies - including Israel, which considers an Iranian nuclear weapon capability to be an existential threat.

The fact that it had been so long since American and Iranian presidents had traded words reflected the "deep mistrust between our countries," Mr. Obama said. But he added that it also indicated the opportunity for moving forward.

"I do believe there is a basis for a resolution," he said.

Iranian and U.N. officials have been meeting to continue talks on how to investigate suspicions that Iran has worked secretly on trying to develop nuclear weapons. Tehran denies that claim.

Earlier Friday, Rouhani called the United States a "great" nation in a sharp reversal from his predecessors and expressed hope that at the very least the two governments can stop the escalation of tensions.

Wrapping up his first trip to the United States as Iran's new leader, Rouhani said Mr. Obama struck a new tone in his U.N. speech this week, which he welcomed.

In his speech, Mr. Obama spoke of the years of isolation between the two nations since the 1979 Iranian revolution that spurred the storming of the U.S. Embassy in Tehran. Mr. Obama said he needs proof of Iran's goodwill before the U.S. would be willing to shift its tough stance against the country's nuclear program, a reference to harsh sanctions that Washington has imposed.

Rouhani said he believes the first step to a meeting between the two leaders was taken Thursday at a meeting on Iran's nuclear program, where the foreign ministers of both nations talked for the first time in six years.

"I want it to be the case that this trip will be a first step, and a beginning for better and constructive relations with countries of the world as well as a first step for a better relationship between the two great nations of Iran and the United States of America," Rouhani told a press conference at a hotel near U.N. headquarters.

He expressed hope that "the views of our people, the understanding of each other, will grow, and at the level of the two governments that at the very least we can as a first step stop further escalation of tensions and then reduce tension as a next step and then pave the way for achieving of mutual interests."

Rouhani was upbeat about his four-day visit to New York to attend the U.N. General Assembly's ministerial session, reeling off a long list of leaders he met and saying "I believe that our success was greater than our expectation, especially with the European countries ... and I think that the path really has been paved to expand relations in various centers, key world economies."

Iran's economy has been hit hard by four rounds of U.N. sanctions for its failure to suspend uranium enrichment, a process that can be used to make fuel for both nuclear weapons and nuclear energy. The U.S. and its allies have taken even more devastating measures targeting Iran's ability to conduct international bank transfers and to export oil.

"What Iran gives away at the nuclear negotiating table, it expects to get back -- in the lifting of U.S.-led economic sanctions," said CBS News correspondent Elizabeth Palmer. "International investors from the U.S., Europe and Asia are betting those sanctions will be lifted sooner rather than later, and many think Iran is the Next Big Thing: an underdeveloped, oil and gas-rich country that -- with foreign money and expertise -- will generate profits on an epic scale. They're getting ready to plunge in

Rouhani said he has a mandate from the Iranian people, who opposed "extremism" and voted for "moderation." He said this has created a "new environment" that could pave the way for better relations with the West.

He said Iran would put forth a proposal at talks in Geneva on Oct. 15-16 aimed at resolving the standoff over his country's nuclear program and easing international sanctions, and he expressed hope that "within a very short time" the nuclear issue will be resolved and relations with the West will improve.

Rouhani said he was encouraged by what he has heard recently from Western officials.

"In speaking with senior European officials and also hearing Mr. Obama ... it seemed that they sounded different compared to the past, and I view that as a positive step to the resettlement of the differences between the Islamic Republic between the Republic of Iran and the West," he said.

He said he did not meet with Obama on the sidelines of the U.N. General Assembly this week because "both sides were convinced that the timetable was too short to plan a meeting of two presidents" and "ensure that its conclusion would be solid."

"What matter to us is the results of such a meeting," Rouhani said.

Rouhani sat down with CBS News' Charlie Rose Wednesday and addressed the issue of resuming negotiations regarding Iran's nuclear program.

Iran watchers say Rouhani may have limited time - possibly a year or less - to reach a settlement on the nuclear issue before Iran's Supreme Leader Ayatollah Ali Khamenei decides negotiations are fruitless.

In an apparent reference to resistance among hard-liners back home, Rouhani noted that "after 35 years of great tensions between Iran and the United States and a very number of issues that persist ... a meeting of the presidents for the first time will naturally come with complications of its own."

But he said Iran emerged hopeful from a lower-level meeting with the U.S. and its international partners aimed at restarting talks to settle their nuclear standoff.

"We hope that these talks will yield in a short period of time tangible results," Rouhani said.

The upbeat, if guarded, tone by both sides after Thursday's meeting of Iran, the five permanent members of the U.N. Security Council and Germany was seen as a significant step forward after months of stalled talks. It was capped by an unexpected one-on-one meeting between U.S. Secretary of State John Kerry and Iranian Foreign Minister Mohammad Javad Zarif, who shook hands and at one point sat side-by-side in the group talks.

In a "60 Minutes" interview, Kerry told "CBS Evening News" anchor Scott Pelley that the Iranians have to convince the United States they are not trying to build nuclear weapons - and he outlined concrete steps they could take.

"They could immediately open up the inspection of the Fordo facility -- a secret facility and underground in the mountains, fortified and unquestionably not something that a peaceful program (laugh) would be doing. They could immediately sign the protocols, the additional protocols of the international community regarding inspections. They could offer to cease voluntarily to take enrichment above a certain level, keep it at a very low level, because there's no need to have it at a higher level for a peaceful program," Kerry said.

In Vienna, meanwhile, Iranian and U.N. officials held a "constructive" meeting on resuming a probe of allegations that Tehran has worked on atomic arms, officials said Friday, in talks seen as a test of pledges by Rouhani to reduce nuclear tensions.

The upbeat assessment and an agreement to meet again Oct. 28 was a departure from the deadlock left by previous meetings over nearly two years.

At issue are suspicions outlined in reports from the U.N.'s International Atomic Energy Agency that Iran worked secretly on trying to develop nuclear weapons - something Tehran denies. As part of its probe, the agency is trying to gain access to a sector at Parchin, a sprawling military establishment southeast of Tehran.

Iran says it isn't interested in atomic arms, but the agency suspects the site may have been used to test conventional explosive triggers meant to set off a nuclear blast.

At the United Nations, Kerry said Thursday that he was struck by the "very different tone" from Iran. But along with his European colleagues, he stressed that a single meeting was not enough to assuage international concerns that Iran is seeking to develop nuclear weapons under cover of a civilian atomic energy program.

"Needless to say, one meeting and a change in tone, that was welcome, does not answer those questions," Kerry told reporters. "All of us were pleased that the foreign minister came today and that he did put some possibilities on the table."

Rouhani has come across as a more moderate face of the hard-line clerical regime in Tehran and his pronouncements at the U.N. have raised guarded hopes that progress might be possible. But they have also served as a reminder that the path to that progress will not be quick or easy.

He has steadfastly maintained that any nuclear agreement must recognize Iran's right under international treaties to continue enriching uranium.