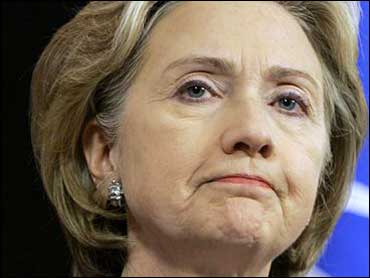 In a sign of the new emphasis on diplomacy, the Obama administration said Thursday that Iran would be invited to a high-level conference on Afghanistan's future.

Secretary of State Hillary Rodham Clinton proposed the session, which could be held at the end of this month, at the same time the Obama administration is reformulating its strategy in a stalemated Afghanistan war.

The new approach is expected to emphasize nonmilitary means of blunting the power of the Taliban and other insurgents and to sharpen the focus on the role of next-door Pakistan in lessening the threat of terrorism or extremism in both countries.

"The whole question about Afghanistan and Pakistan is one that we've given a great deal of thought to," Clinton said. "It is clear that the border areas between the two countries are the real focus of a lot of the extremist activity. It's becoming obvious that Pakistan faces very serious internal threats, and that Afghanistan faces continuing external threats that emanate out of Pakistan."

Pakistan would attend the conference of nations with a stake in Afghanistan, Clinton said, and U.S. officials said Iran would be invited as a neighbor. It could be an early opportunity to test President Obama's campaign promise to extend a friendlier hand to the old U.S. adversary when it is in U.S. interests to do so.

The United States and Iran have cooperated on Afghanistan before, with promising contacts following the Sept. 11, 2001, terror attacks, and held inconclusive talks that the United States had hopes would improve security and stability in Iraq.

Also Thursday, U.S. defense officials gave a glimpse of an in-house policy review Mr. Obama ordered last month, even though three other government studies were in hand or in the works. Those studies generally describe a military backslide in the 7-year-old war.

"Ultimately the product that will steer the policy of the United States of America with regards to Afghanistan will be the White House review," Pentagon spokesman Geoff Morrell said in Washington.

The White House national security council is expected to finish the review before Mr. Obama sees NATO leaders at an April summit. The United States has about 38,000 troops in Afghanistan, and is the largest contributor to a joint NATO force. NATO also has about 30,000 non-U.S. troops there.

The war effort in Afghanistan has deteriorated the past two years as the Taliban and extremist insurgency has gained strength and U.S. and allied casualties have increased. Mr. Obama has approved sending an additional 17,000 U.S. troops to Afghanistan this spring and summer, but he also has emphasized the need to have a broader, unified international approach to the conflict.

Defense Secretary Robert Gates discussed the review, and the military scramble to counter a resurgent Taliban in Afghanistan's south, with his Canadian counterpart Thursday. Canada has one of the largest fighting forces in Afghanistan.

"I told him that frankly we weren't at a point where I could offer even preliminary conclusions to him," Gates told reporters after his session with Canadian Defense Minster Peter MacKay.

"I talked about some of the issues that were being addressed. For example, the size of the foreign military presence, how we get better civilian-military coordination and so on," Gates said.

Gates has said pervasively that flooding Afghanistan with a large number of foreign troops would be self-defeating, and he has suggested that NATO nations reluctant to send more fighting forces could provide more civilian trainers, engineers and so forth instead.

In Brussels for a NATO session leading up to the April summit, Clinton said the proposed conference on Afghanistan would be sponsored by the United Nations and attended by a wide range of countries.

"We hope that this meeting could provide an opportunity to reach a common set of principles, perhaps embodied in a chairman's statement, on a common way forward," she said, according to a prepared text released by her staff.