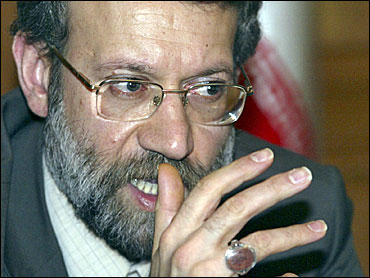 Iran's top nuclear negotiator on Thursday insisted that bilateral talks should continue on a Russian offer to enrich uranium for Iran and warned that handing over the nuclear issue to the U.N. Security Council — as the United States has demanded — would kill Moscow's initiative.

Larijani said his team had put forward a "package proposal" in Wednesday's talks in Moscow, denying that the discussions had ended in failure. "We need to give diplomats time to look at it," he said.

Russia has urged Iran to freeze its domestic uranium enrichment program as a condition for its offer to create a joint venture to enrich uranium for Tehran on Russian territory. But Larijani reaffirmed Tehran's refusal to give it up following Wednesday's talks. The point was reinforced by Iranian President Mahmoud Ahmadinejad, who said during a visit to Malaysia that "it is very clear that we are not open to negotiating on our inalienable rights."

A Russian nuclear agency official, who spoke on condition of anonymity because he was not authorized to speak with the press, said the Moscow talks had snagged over Iran's refusal to return to a moratorium on enrichment.

"They are ready in principle to accept our proposal, but we don't want to discuss it separately" from the need for Iran to return to the moratorium, the official said.

Talks between Russia and Iran resumed on Thursday, the ITAR-Tass news agency reported, quoting an unnamed official close to the negotiations.

"Consultations are taking place," the official was quoted as saying by ITAR-Tass, without specifying who was participating in the talks on either side. The Iranian delegation was to expected to fly out of Moscow later Thursday ahead of talks in Vienna with three European nations due to take place on Friday.

The U.S. State Department said Wednesday that Iran's persistence in conducting its own enrichment gave reason to hand over the Iranian nuclear dossier to the U.N. Security Council.

"The Americans are saying one thing in words, but then they throw a spanner into the works," Larijani said.

Larijani said Tehran will conduct separate talks with Britain, France and Germany — which have represented the European Union in nuclear negotiations with Iran — before a key meeting of the International Atomic Energy Agency's governing board on Monday.

The Vienna-based IAEA board of governors could start a process leading to punishment by the U.N. Security Council, which has the authority to impose sanctions on Iran.

Iran insists its nuclear program is only to generate power, but many in the West fear Iran is aiming to develop atomic weapons.

Moscow's offer to have Iran's uranium enrichment program transferred to Russia has been backed by the United States and the EU as a way to provide more assurances that Tehran's atomic program could not be used to build weapons.

Larijani also said Tehran would accept inspections by the United Nations nuclear watchdog if the IAEA allows it to pursue its nuclear program.

Asked about IAEA chief Mohamed ElBaradei's reported statement that the world may have to get used to the idea of Iran's having limited enrichment capabilities, Larijani said it reflected a "realistic approach."

"I hope that people and ears can be found to listen to this proposal. I think that Mr. ElBaradei's idea can be turned into a new formula, it can be studied," he said.