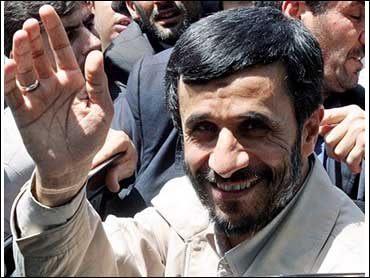 Iran's top nuclear negotiator said his European counterparts have proposed a guarantee that Iran won't be invaded if Tehran agrees to a permanent halt on uranium enrichment, the state-run Islamic Republic News Agency said on Sunday.

Hasan Rowhani said the proposal is under discussion by the Europeans and includes several important points such as "guarantees about Iran's integrity, independence, national sovereignty" and "nonaggression toward Iran," the agency reported.

"If Europe is serious about Iran's nuclear fuel cycle, there is the possibility of an understanding," the agency quoted Rowhani as saying in a letter to outgoing Iranian president Mohammad Khatami.

Iran could resume nuclear conversion and enrichment at any time, Rowhani said in his letter. In the case of military attack on Iran's scattered nuclear facilities, the country could continue both tasks without any delay or fear of damage, he said.

"Europe has only a few hours, up to when the council meets, for the proposal. If it does not arrive by that time, the council will discuss breaking the ice" on Iran's stalled nuclear program, Agha Mohammadi told state-run radio.

Other incentives offered by European negotiators include promoting political and security cooperation between Iran and Europe, considering Iran as a chief source of energy for Europe, and support for Iran's membership in the World Trade Organization, Rowhani's letter stated.

Earlier Sunday, Iran threatened to resume its nuclear program and hoped to do so under the watch of the U.N.'s International Atomic Energy Agency.

"Today or tomorrow we will send a letter to the IAEA about resumption of activity in the Isfahan Uranium Conversion Facility," said Hamid Reza Asefi, Iran's foreign ministry spokesman. "We would like to unseal the equipment and carry on the activity under the IAEA."

Asefi said the IAEA's inspectors were conveniently already in Tehran, a short flight to the central Iranian city of Isfahan.

"Since our nuclear policy is transparent and legal, we will start activity upon delivering the letter to the IAEA, with the inspectors in attendance," Asefi said.

Once the Isfahan plant resumes work, Asefi said Tehran will no longer discuss halting activities there.

Rowhani said it appeared that European negotiators were trying to draw out their talks with Tehran until September, when the incoming Iranian administration is expected to announce its nuclear policies.

On Saturday, Iran rejected a request from European negotiators to postpone by a week the release of new European proposals for resolving the nuclear dispute.

France, Britain and Germany, acting on behalf of the 25-member European Union, had been expected to present the proposals to Iran by the beginning of August but requested a delay until Aug. 7.

The proposals are part of an agreement reached in May under which Iran would continue its suspension of nuclear activities in return for a comprehensive European plan for resolving the nuclear dispute.

Khatami, who will be replaced Aug. 6 by ultraconservative president-elect Mahmoud Ahmadinejad, said Wednesday that Iran would resume some suspended activities, with or without European consent.

Iran has said it will not resume the more controversial step of feeding the gas into centrifuges to produce enriched uranium, which can be used either as nuclear energy fuel or as the core of a weapon.

The United States accuses Iran of seeking to produce weapons, while Iran insists it aims to generate electricity. The Europeans are trying to persuade Iran to accept economic incentives for a permanent halt to enrichment.

Iran has shown growing impatience with the negotiations, insisting its suspension, in place since November, is not permanent.