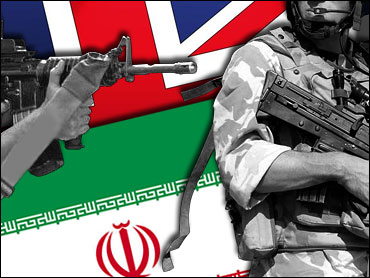 Britain has demanded the return of the sailors and denied they had strayed into Iranian waters while searching for smugglers off Iraq's coast.

The Britons were brought to Tehran for questioning, and a top military official, Gen. Ali Reza Afshar, said they "confessed to illegal entry into Iran's waters."

"The said personnel are being interrogated and have confessed to aggression into the Islamic Republic of Iran waters," Afshar was quoted as saying by the semi-official ISNA news agency.

"The detention of British sailors and marines by the Iranian government is a clear escalation of Iran's defiant approach to the international community and has the potential of escalating to a military confrontation with so many U.S. and British troops and aircraft carriers in the Gulf," said CBS News Foreign Affairs Analyst Pamela Falk from the U.N. Saturday.

"The detention of British military personnel appears timed to distract from the Security Council vote against Iran today, particularly since the waterway in which they were taken into custody is an area of long dispute between Iran and Iraq and the border difficult to distinguish."

The eight Royal Navy sailors and seven Royal Marines had just searched a merchant ship when they and their two inflatable boats were intercepted by Iranian vessels Friday at around 10:30 a.m. near the disputed Shatt al-Arab waterway, U.S. and British officials said. The Iranian vessels surrounded them and escorted them away at gunpoint.

Navigational equipment on the seized British boats "show that they (sailors) were aware that they were operating in Iranian waters and Iranian border guards fulfilled their responsibility," Fars quoted an unidentified official as saying.

The agency said the 15 included "some women." In Britain, officials told the Press Association news agency that at least one woman was among the group.

U.S. and British officials said the incident occurred during a routine inspection of a merchant ship near the disputed Shatt al-Arab waterway, which flows between the two countries and empties into the Gulf. The inspections were part of an ongoing operation to intercept smugglers, insurgents and terrorists, and to protect Iraqi oil terminals, CBS News correspondent Allen Pizzey reports.

The inspection went without a hitch and the British inflatable rafts that the service members use were on the way back to their mother ship when six Iranian Revolutionary Guard naval vessels surrounded them, Pizzey reports.

The incident came at a time of heightened tensions over Tehran's nuclear ambitions and allegations that Iran is arming Shiite Muslim militias in Iraq, but Britain was treating it as a mistake rather than a provocation.

"Violating the sovereign boundaries of other states and illegal entry denote unusual goals in violation of international commitments, the responsibility for which cannot be evaded under any justification," Hosseini said, according to the state-run IRNA news agency.

Hosseini described the incident as a "suspicious move" and accused Britain of trying to cover up the illegal entry.

"The British officials instead of making up for their blunders should try to refrain from putting the blame on others by way of irrelevant interpretations," he said.

Iran summoned the British charge d'affaires to the Foreign Ministry on Friday and demanded an immediate explanation.

Britain, in turn, demanded Tehran release the 15. In London, the British government summoned the Iranian ambassador to the Foreign Office, and Foreign Secretary Margaret Beckett said the Iranian envoy "was left in no doubt that we want them back."

Britain's Defense Ministry said the Royal Navy personnel were in Iraqi territorial waters when they were seized. Cmdr Kevin Aandahl of the U.S. Navy's Fifth Fleet in Bahrain also said it was "very clear" they were in Iraqi waters.

"We've been on operations there for several years," Aandahl said. He said coalition vessels respect a 1975 treaty between Iran and Iraq that sets the boundary between the two countries as running down the middle of the Shatt al-Arab.

But the boundary has long been in dispute around the 125-mile-long channel Shatt al-Arab — known in Iran as Arvandrud, Farsi for the Arvand River. Saddam Hussein canceled the 1975 treaty five years later and invaded Iran, triggering an eight-year war. Virtually all of Iraq's oil is exported through an oil terminal near the mouth of the channel.

The Iraqi military commander of the country's territorial waters cast doubt on claims the Britons were in Iraqi waters.

"We were informed by Iraqi fishermen after they had returned from sea that there were British gunboats in an area that is out of Iraqi control," Brig. Gen. Hakim Jassim told AP Television News in the southern city of Basra.

"We don't know why they were there. And these British troops were besieged by unknown gunboats, I don't know from where," he said.

The sailors, from the frigate HMS Cornwall, are part of a task force that maintains security in Iraqi waters under authority of the U.N. Security Council.

The Cornwall's commander, Commodore Nick Lambert, said he hoped the detention was a "simple mistake" stemming from the unclear border.

In June 2004, six British marines and two sailors were seized by Iran in the same waterway. They were presented blindfolded on Iranian television and admitted entering Iranian waters illegally, then released unharmed after three days.

White House press secretary Tony Snow said the Bush administration was monitoring events. "The British government is demanding the immediate safe return of the people and equipment and we are keeping watch on the situation," Snow said.

The incident occurred as the U.N. Security Council debates expanding sanctions against Iran for refusing to suspend uranium enrichment. A vote was expected later Saturday. The U.S. and other nations suspect Iran is trying to produce nuclear weapons. Iran denies that and insists it won't halt the program.

Iran's leaders also have denied allegations by the U.S., Britain and others that Iranians are arming Shiite Muslim militias in Iraq.

With tensions running high, the United States has bolstered its naval forces in the Persian Gulf in a show of strength directed at Iran. A strike group led by the aircraft carrier USS John C. Stennis recently joined a similar force led by the carrier USS Dwight D. Eisenhower.

U.S. officials have expressed concern that with so much military hardware in the Gulf, a small incident like Friday's could escalate into a dangerous confrontation.

Ayatollah Ali Khamenei, Iran's supreme leader, warned this week that if Western countries "treat us with threats and enforcement of coercion and violence, undoubtedly they must know that the Iranian nation and authorities will use all their capacities to strike enemies that attack.

Falk said: "Military confrontation with Iran in the Gulf is everyone's nightmare scenario. Diplomatic efforts at the U.N. and with the Baghdad conference, which included Iran, were not very successful efforts to keep a cap on Iran's defiance."

The incident occurred as the U.N. Security Council debates further sanctions against Iran over its disputed nuclear program, and amid U.S. allegations that Iran is arming Shiite militias in Iraq.

The U.S. military has leveled similar charges against the Iranians, insisting they are providing weapons including sophisticated roadside bombs used to kill Americans. Iran has denied the allegations.