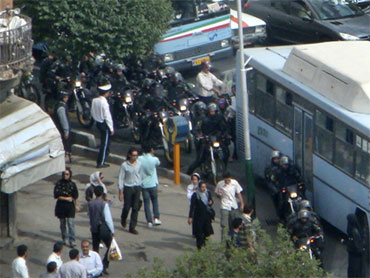 At least three others caught up in the turmoil have received death sentences previously.

Iran began a mass trial in August of prominent opposition figures and activists, accusing them of a range of charges from rioting to spying and plotting what authorities have called a "soft revolution" to topple the country's Islamic rulers.

The opposition led massive street protests and clashed with security forces in the weeks following the disputed June 12 presidential election. The opposition claimed fraud after election authorities declared President Mahmoud Ahmadinejad the winner of a second term and their anger unleashed the most serious internal unrest in Iran in the 30 years since the Islamic Revolution.

A Justice Department statement said the five sentenced to death were members of "terrorist and armed opposition groups," state television reported. The statement said the courts have sentenced a total of 89 defendants since the process began and 81 of them got prison terms ranging from six months up to 15 years.

"So far, 89 of defendants were tried and based on their cases, death sentences were issued for five of them," the statement said.

It said the 81 people sentenced to prison terms were charged with a range of offenses from security violations, agitating against the Islamic Republic, violating law and order, damaging public and private property, and assaulting civilians and security forces.