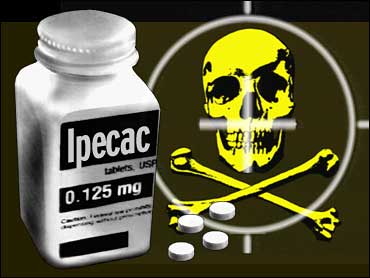 Generations of parents knew the rule: Keep a bottle of ipecac around to induce vomiting in case your child swallows a poison. Now that rule may be about to change.

Amid evidence that ipecac doesn't actually treat poisoning well and is being abused, sometimes fatally, by people with bulimia — the government is considering ending over-the-counter sales of the syrup.

For many of last year's cases, specialists say the children didn't swallow enough poison to do real damage, and the ipecac made no difference.

"So we take somebody who's going to do fine with nothing, and we make them throw up a few times, and we all feel better because, you know, we've done something," Dr. Alastair Wood of Vanderbilt University told fellow scientific advisers to the Food and Drug Administration.

FDA, which expects to decide by early next year, isn't the only organization grappling with the issue.

The American Association of Poison Control Centers and American Academy of Pediatrics are writing new guidelines, due this fall, that are expected to discourage use of ipecac in almost every poison exposure. An exception might be when a child lives hours away from the hospital care required to treat certain severe poisonings.

While the debate continues, the best advice hasn't changed: People who think someone has been exposed to a poison should call the nationwide poison-control hot line immediately, at 1-800-222-1222.

The move away from ipecac probably will shock parents — it is counterintuitive. But it's fueled by a lack of proof that ipecac helps children survive severe poisoning, despite widespread in-home use since 1965.

Yes, it makes them vomit. But it was never meant for every swallowed poison — anything caustic or that could be aspirated into the lungs isn't supposed to be thrown up. And even if administered within a half-hour of ingesting a target poison, studies show ipecac removes, on average, only about 30 percent.

To some doctors, every little bit helps. To others, in a severe poisoning, giving ipecac delays getting to the hospital for better care.

In fact, hospitals are moving away from vomiting and stomach-flushing as poison treatments, in favor of such methods as oral antidotes or activated charcoal, which can absorb certain toxins before they reach the bloodstream.

At the same time, ipecac has risks. Sometimes vomiting continues for more than an hour, and, very rarely, the retching can be violent enough to trigger brain hemorrhaging or gastric tears.

Used repeatedly, ipecac can build up and destroy muscle tissue, including the heart. It's sold in small bottles to deter abuse, yet some 4 percent of bulimia patients in eating-disorder clinics admit regularly using ipecac to purge.

Then there's Munchausen syndrome by proxy, where parents harm children to get attention. Medical journals describe 13 known cases where ipecac was the poison used.

The FDA now must decide if there's enough possible benefit to keep ipecac readily available to offset those risks. An alternative might be to let doctors prescribe the syrup for families in rural areas far from hospitals.

There's little else to offer at home. Some doctors advise keeping activated charcoal on hand, too, but it tastes so bad that getting it down children often is impossible. Don't force vomiting by gagging a child or giving homemade purges, specialists stress.

The bottom line: Child-poisoning deaths have plummeted in recent decades thanks largely to prevention. Use child-resistant packaging and keep toxic substances locked away.

If you think a poisoning has occurred, stay calm, call poison control right away and describe the substance so the experts can offer the best advice.