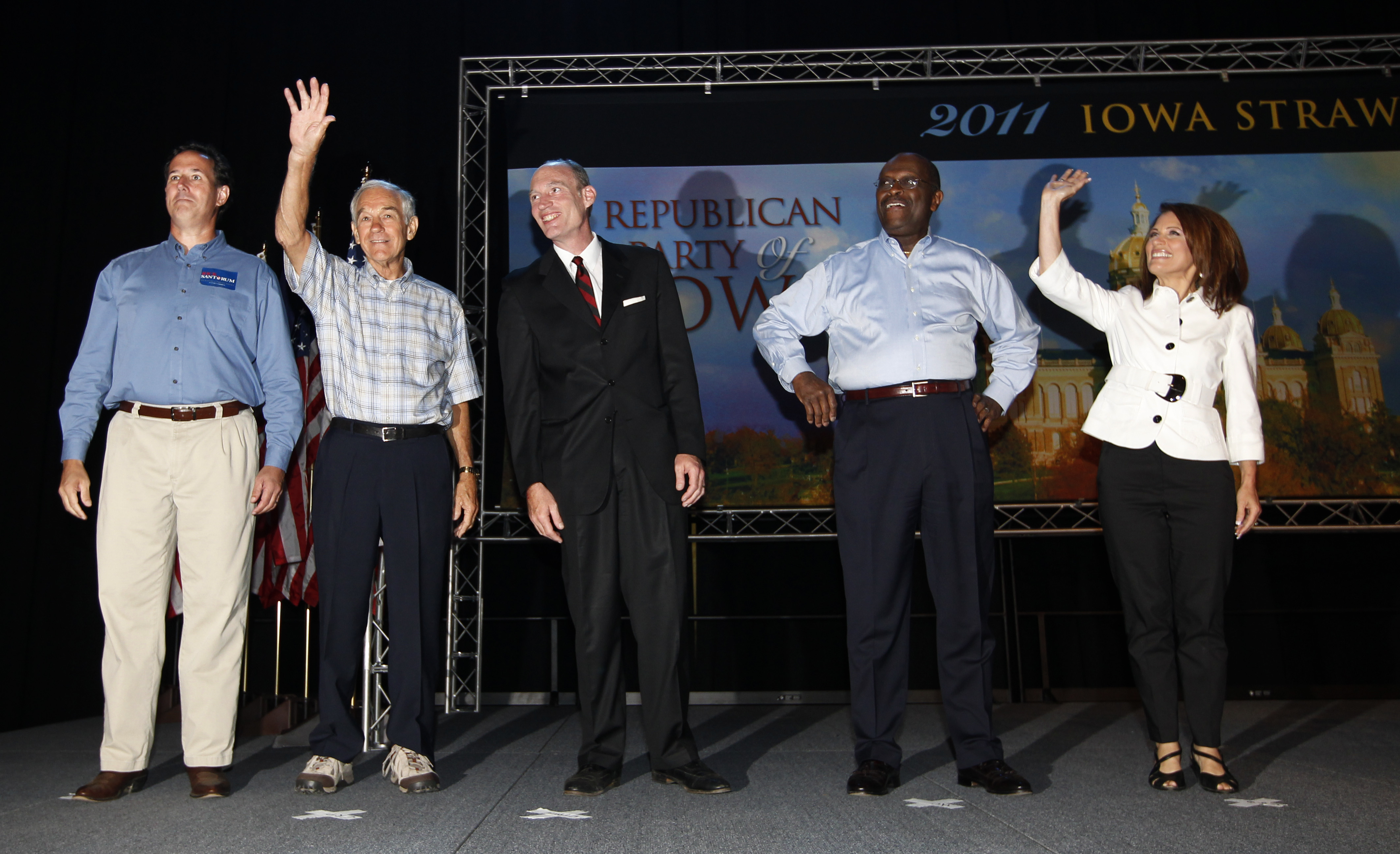 It was a big day in Iowa for people who will not be president. Michele Bachmann crushed at the Ames straw poll, and Ron Paul came in a strong second. If history is any guide, that means neither candidate will make it to the White House. The man who many Republicans think will win the nomination was half a country away. In South Carolina, Texas Gov. Rick Perry announced that he is running for president.

The two poles of energy in the Republican race highlighted the tension that faces the party: between sending a message to Washington and sending a candidate who can win an election. All parties face this tension, but it is particularly acute for the Republican Party at the moment. President Barack Obama is weak, which means a Republican candidate could appeal to independents who have soured on Obama. At the same time, Tea Party activists--who give the party its power and energy and who have reshaped politics in Washington--alienate those same independent voters.

Michele Bachmann is the perfect message candidate. It doesn't matter to her supporters that she has no executive experience and that she has no notable accomplishments in Washington. These were two of Tim Pawlenty's attack lines in Thursday's debate, but what becomes clear talking to her supporters is that want "someone who can say stop," as Thomas Nicholls put it to me. "She is the one saying stop the loudest." When you see government as a rampaging elephant, you want a candidate who can shoot the elephant dead, not someone who can manage to ride the elephant better.

Bachmann is a very good first-time candidate. At campaign stops, her message is focused, and her connection with the audience is genuine. Her organization was equally honed. The line to get inside her tent stretched nearly to Minnesota. Inside, between country music acts, an organizer asked who had voted, and a sea of fingers pointed toward the ceiling, each marked with a blue dot that signified they had.

But the challenge for Bachmann was on display inside her tent. A couple stood at the back of the room with their 9-year-old daughter. When I asked the woman, Tara, why she was supporting Bachmann, she pointed to her adopted daughter. "If it weren't for her birth mother, I wouldn't be her parent," she said, explaining her pro-life connection to the candidate.

She shared a deep value connection with the candidate, as did her husband, who summed up Bachmann this way: "She makes her claim, and she stands her ground." Still, unasked, they raised the issue of her electability. "She can be polarizing electorally. She has a Palin-esque quality that can turn people off." When I asked about Rick Perry, they were open to switching, because he shares Bachmann's values, too. "If he were here, maybe we'd be at his tent."

Ron Paul's near-victory was as expected as Bachmann's first-place finish. His supporters are passionate. If voting for the straw poll required walking the last mile to the voting booth, they'd have done it on their hands. But while Paul improved over his fifth-place finish from 2007, he is still too controversial to win the nomination.

If winning the straw poll means nothing about your eventual chances in the Iowa caucuses or in the general election, why is everyone likely to write off Tim Pawlenty after his third-place finish? Pawlenty needed a result that would help him persuade people he is asking for campaign donations that he can connect with voters when he makes a concerted effort. He got 2,293 votes, half the Bachmann total. It was a weak finish for a candidate who worked the state so hard.

When Lamar Alexander came in third in the Iowa straw poll in 1996, it was better than people thought he could do, and it gave him a boost. When he came in fifth in 1999, his campaign was over, because he'd invested so much in the state. Which version of the Alexander history will Pawlenty follow? That will depend on those who might have been willing to write checks to fund his campaign. Without their support, he won't have the resources to compete against the better-funded Perry and the intensely loved Bachmann and Paul.

The main candidates competing to win the straw poll had big fancy tents, musical acts, and free barbecue. Ron Paul had a slide for kids called the "sliding dollar." (Geddit?) On the edge of this, Rick Perry's supporters watched their man on flat-screen televisions and wore T-shirts with his slogan "Let's Get America Working Again." Though he was a write-in candidate at the poll, Perry got 718 votes, besting Mitt Romney, who got 567, even though he, unlike Perry, was on the ballot, a sign that Perry's late-starting organization effort paid off.

Those vote totals are small compared to the votes Paul and Bachmann got, but no sign can be too small for insiders trying to figure out how Rick Perry changes the alignment in the Republican race. Perry is considered a strong candidate because he can raise money, and because he combines Tea Party appeal with prospects among the GOP establishment. A veteran of New Hampshire politics says that the party officials and insiders who are anxious to jump to Perry are not Tea Party types but Republicans who backed George W. Bush and his father.

Perry is, "the complete picture," to repeat the cliché I've heard from insiders too many times. But is he really? This takes us back to the tension within the Republican Party. Perry may be a great primary candidate, but will he be a good general election candidate? That is the key issue Romney will raise for the next several months. Romney will argue that Perry is too Tea Party to win in a general election. Also, is the country ready for another Texas governor? Perry may be very different from George Bush. Their camps dislike each other, but when he talks, the echoes of our most unpopular recent president abound.

But before Perry can get to the general election, he will face a series of challenges. The first is that he is a vessel for voter expectations. He's everything to everyone. That can lead to disappointment if the reality doesn't live up to the dream. When I asked the New Hampshire veteran what quality of Perry's had people rushing to him, he said, "That's the funny thing, they don't know much about him."

In September, there will be three GOP debates--three chances for Perry to look less than advertised. Reporters will start looking at his Texas record and his dealings in the back-room world of Texas politics. He'll have to respond to these stories on the national level for the first time with less time to recover than if he'd started his campaign earlier. And he'll have to learn how to adjust his considerable talents as a Texas politician to the small rooms of Iowa and New Hampshire, which require a different touch. He'll start in Iowa Sunday with a stop at the Iowa state fair, where his opponents spent the week being wowed by this year's culinary delight: fried butter. Old hat for Perry. They served that at the Texas state fair two years ago.