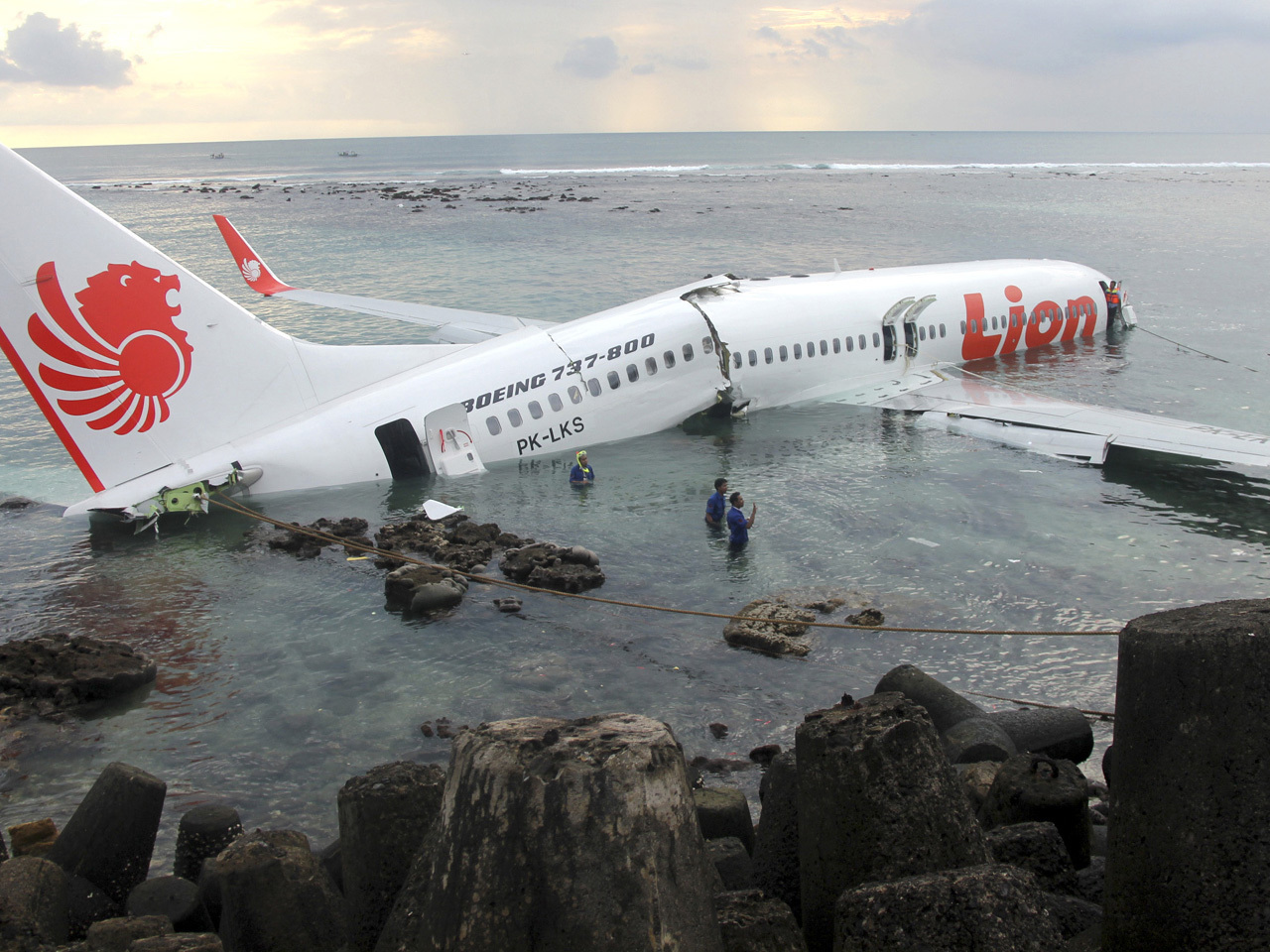 BALI, Indonesia Indonesian investigators on Sunday began working to determine what caused a new Lion Air passenger jet to miss a runway while landing on the resort island of Bali, crashing into the sea without causing any fatalities among the 108 on board.

The National Transportation Safety Committee is examining the wreckage of the Boeing 737-800 that snapped in half before coming to a stop in shallow water near Bali's airport on Saturday, said Transportation Ministry spokesman Bambang Ervan.

He said aviation authorities had already removed the plane's flight data recorder and were planning to tow the aircraft to a beach. Divers were searching for the cockpit voice recorder located in the tail. Experts are examining what could have caused the crash, including whether wind shear may have played a role.

All 101 passengers and seven crew members were safely evacuated from the budget carrier's flight, which came from Bandung, the capital of West Java province. Some swam from the wreckage, while others were plucked from the water by rescuers in rubber boats. Dozens suffered injuries, but most had been released from local hospitals by Sunday.

"I couldn't wait to land in Bali when the cabin suddenly turned dark. I heard a sound like an explosion and water was coming in," recalled Irawati, a 60-year-old woman who uses one name, like many Indonesians.

"I heard people shouting frantically: 'The plane crashed! Get out! Get out!' I did not even have the energy to move my body," she said. "I was so weak and frightened, and I was asking a flight attendant for help before I passed out."

Irawati told The Associated Press from her hospital bed that when she regained consciousness, the pilot and co-pilot were putting a life jacket on her and helping her down a rubber ladder. She was then pulled onto a surfboard by rescuers. She suffered neck injuries.

Another survivor, Andi Prasetyo, who is now staying at a hotel, said there was no warning of any problem.

"The cabin crew had already announced that we would be landing shortly, and I was so excited when I saw the ocean getting closer, but suddenly ... it fell," he said. "I can't believe that the plane actually landed on the sea, and everything changed to dark. It was full of horrific screaming. None of us remembered about the life jackets under our seats. Everybody rushed to get out of the plane."

Officials said there were three foreigners on board - two Singaporeans and a French national - all of whom suffered slight injuries.

Lion Air spokesman Edward Sirait said the plane crashed about 50 meters (164 feet) ahead of the runway. The weather was cloudy with rain at the time of the incident.

He said the Boeing 737-800 Next Generation plane was received by the airline last month and was declared airworthy. The plane had landed in two other cities on Saturday prior to the crash.

Given that the aircraft was new, Sydney-based aviation expert Tom Ballantyne said a technical or mechanical problem would seem unlikely. He said it was fortunate that the plane landed flat in shallow water rather than nose-diving or hitting deep water, where it could have quickly been submerged.

"I'm surprised. The airplane split in two upon impact," he said, estimating it was likely traveling close to 300 miles (483 kilometers) per hour.

"It was coming into land and hit the water very hard. It's a miracle nobody was killed," Ballantyne said.

It was unclear whether human error may have played a role in the accident, and Sirait said the pilot was experienced, logging 10,000 flying hours. However, Indonesian aviation analyst Ruth Simatupang, a former investigator at the National Safety Transportation Committee, suspects some sort of miscalculation involving the landing.

"Something was obviously wrong with the pilot, and wind shear is a possibility that could lead to an unstable approach," she said. Sudden changes in wind speed or direction can lift or smash aircraft into the ground during landing.

The pilot and co-pilot will be grounded for two weeks for tests to ensure they were healthy during the flight and for questioning by investigators. They also have undergone alcohol and drug testing, and the preliminary results were negative, Herry Bakti Gumay, a Transportation Ministry official, told a news conference Sunday. In the past two years, three pilots, one co-pilot and a flight attendant from Lion Air have been arrested for illicit drug use.

The airline said it planned to suck the remaining fuel from the undamaged tanks in the plane's wings before towing it at high tide to avoid destroying the area's coral reefs. Bali is one of Asia's most popular destinations, drawing millions of vacationers with its world-class surf and beautiful beaches.

Rapidly expanding Lion Air is Indonesia's top discount carrier, holding about a 45 percent market share in the country, a sprawling archipelago of 240 million people that's seeing a boom in both economic growth and air travel. The airline has been involved in six accidents since 2002, four of them involving Boeing 737s and one resulting in 25 deaths, according to the Aviation Safety Network's website.

Lion Air is currently banned from flying to Europe due to broader safety lapses in the Indonesian airline industry that have long plagued the country. Last year, a Russian-made Sukhoi Superjet-100 slammed into a volcano during a demonstration flight, killing all 45 people on board.

Indonesia is one of Asia's most rapidly expanding airline markets, but is struggling to provide qualified pilots, mechanics, air traffic controllers and updated airport technology to ensure safety.

Lion Air, a private company which started flying in 2000, signed a $24 billion deal last month to buy 234 Airbus planes, the biggest order ever for the French aircraft maker. It also gave Boeing its largest-ever order when it finalized a deal for 230 planes last year. The aircraft will be delivered from 2014 to 2026 as the airline positions itself to take on AirAsia, which dominates budget travel in the region.