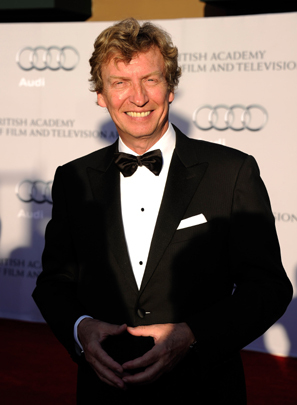 (CBS/AP) NEW YORK - "American Idol" executive producer and "So You Think You Can Dance" head judge Nigel Lythgoe is getting an Emmy.

Lythgoe, 62, who returned as "Idol"' executive producer last season, will be given the honorary International Emmy Founders Award on Monday night at the Hilton New York Hotel in recognition of his work as "a major reality show innovator" as well as for "his amazingly deep commitment to dance around the world," said Bruce L. Paisner, president and CEO of the International Academy of Television Arts & Sciences.

"I've been nominated (six times) for an Emmy for 'American Idol' ... and haven't won any of them," Lythgoe said in an interview with The Associated Press. "I've even got printed on my business card 'multi-Emmy loser' so it's going to be wonderful to actually accept one."

Lythgoe produced the British TV phenomenon, "Pop Idol," and then was tasked with creating its American version in 2002. He also produces and helps judge "So You Think You Can Dance," a summer show on Fox.

A former dancer and choreographer, he is being honored in part for his philanthropic work. In 2009, along with actress Katie Holmes, director-choreographer Adam Shankman and "Dancing with the Stars" judge Carrie Ann Inaba, he founded the Dizzy Feet Foundation, which provides scholarships to young dancers to study with leading professional companies and supports dance education programs

Forty nominees from a record 20 countries will be competing in 10 categories for International Emmys, honoring excellence in TV programming outside the U.S. The ceremony will be hosted by former "Beverly Hills 90210" star Jason Priestley.

Among the nominees are the British crime series "Accused"; "Mo," a mniseries about Mo Mowlam, the late Secretary of State for Northern Ireland who battled a brain tumor while working to forge the 1998 peace accords; and Sweden's "Millennium," based on the late Stieg Larsson's crime novel trilogy. Its stars, Michael Nyqvist and Noomi Rapace, also are up for Emmys in the acting categories.