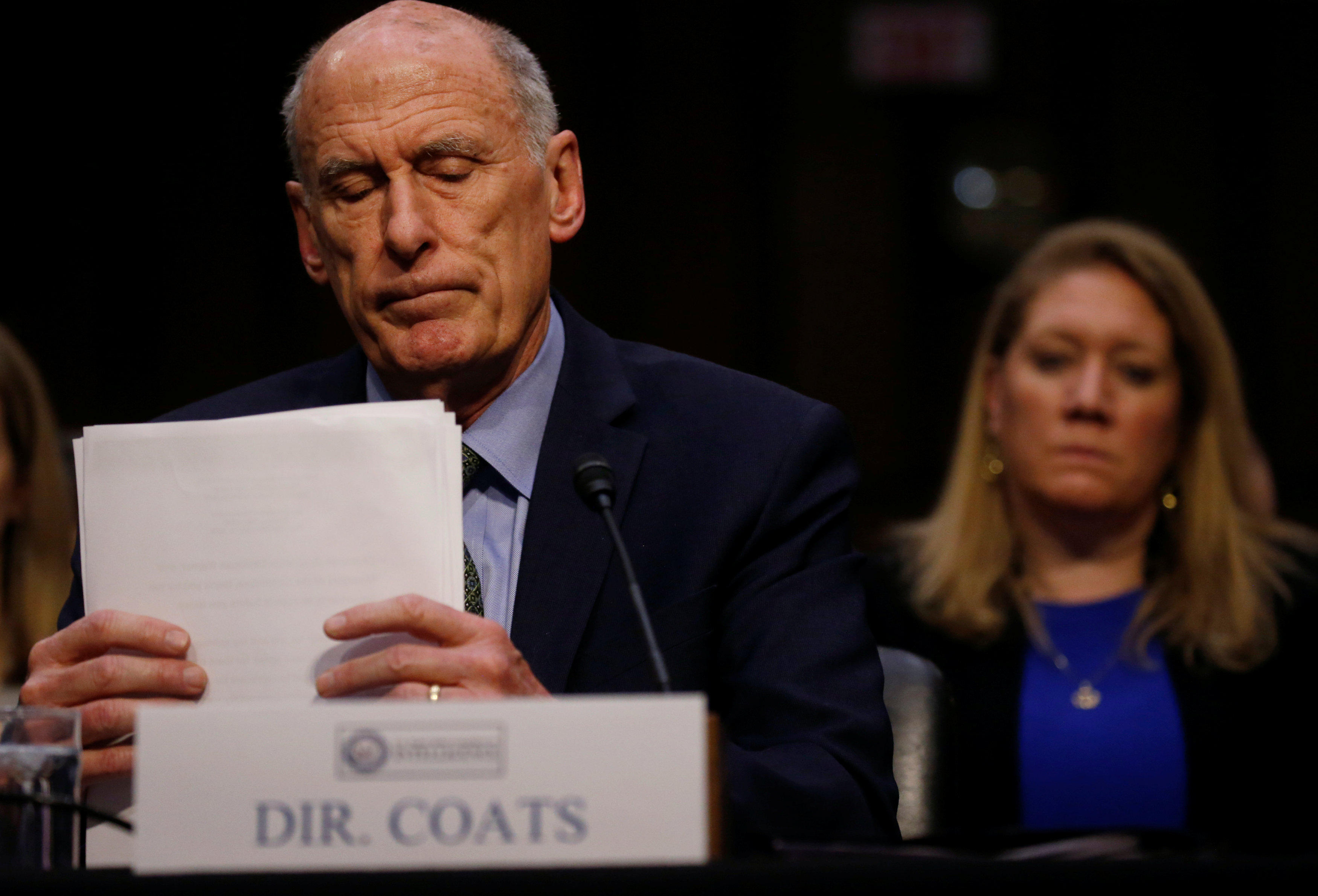 WASHINGTON -- In an open session of the Senate committee's annual Worldwide Threat Assessment hearing on Tuesday, all six intelligence chiefs told Vice Chairman Sen. Mark Warner, D-Virginia, that they stood by the conclusions of a January 2017 assessment that said the Russian government -- at President Vladimir Putin's instruction -- interfered in the 2016 presidential election. "We need to inform the American public that this is real," Director of National Intelligence Dan Coats said Tuesday.

"That this is going to happen, and the resilience needed for us to stand up and say we're not going to allow some Russian to tell us how to vote, how to run our country," Coats, who leads the nation's 17 intelligence agencies, said.  "I think there needs to be a national cry for that."

The January 2017 assessment did not evaluate whether the interference affected the election's outcome.

Several of the intelligence officials, including CIA Director Mike Pompeo, said Russia's efforts were "not going to change or stop" in 2018 or beyond.  "We have seen Russian activity and intentions to have an impact on the next election cycle here," Pompeo said.

A number of Democratic senators, starting with Warner, asked aloud why that national cry hasn't originated with, or even been articulated by, the White House.

"The President inconceivably continues to deny the threat posed by Russia," Warner said in his opening statement. "He didn't increase sanctions on Russia when he had a chance to do so. He hasn't even tweeted a single concern. This threat demands a whole-of-government response, and that needs to start with leadership at the top."

President Trump has repeatedly cast doubt on the idea that Russian election meddling occurred, alternately calling the country's influence efforts a "hoax," "fake news," or a "big Dem scam." He has suggested China, and "some guy in his home in New Jersey" could just as likely be blamed for the interference. After initially saying last year that he believed Putin when Putin "said he didn't meddle," Mr. Trump has appeared to side with the American intelligence community's conclusions.

"As to whether I believe it or not," Mr. Trump said on Nov. 11, "I'm with our agencies, especially as currently constituted with their leadership. I believe in our intelligence agencies. I've worked with them very strongly."

Later in Tuesday's hearing, an animated Sen. Angus King, I-Maine, said "we cannot confront this threat, which is a serious one, with a whole of government response when the leader of the government continues to deny it exists."

"I understand the president's sensitivity about whether his campaign was in connection with the Russians. That's a separate question," King said.

Several of the intelligence officials insisted the White House was taking the threat seriously. In response to questions from Sen. Jack Reed, D-Rhode Island, Pompeo said "the President's made very clear: We have an obligation, from our perspective, from a foreign intelligence perspective, to make sure there's a deep and thorough understanding of every threat, including threats from Russia."

But none of the officials testified that they or their agency had received explicit directions from Mr. Trump to confront and blunt Russian influence activities. Some, including Coats, said they were looking to the various congressional investigations for answers.

"We are essentially relying on the investigations that are underway," Coates said before Reed interrupted.

"You're not taking any specific steps based on the intelligence to disrupt Russian activities that are occurring?" Reed asked.

"We take all kinds of steps to disrupt Russian activities in terms of what they're trying to do," Coats responded, before turning to Pompeo.

"We have a significant effort, to do our best to push back against this treat, and it's not just the Russian threat – it's Iranians and Chinese – it's a big, broad effort –" Pompeo said.

"I can't say that I've been explicitly directed to, quote, blunt or actively stop," Rogers said, though he added that directions to "generate knowledge and insight" to inform policy "has been very explicit, in fairness."

Some Republicans, like Sen. James Risch, R-Idaho, were less sanguine about the gravity or the likely impact of the threat from Russia. Referring to Warner, the committee's vice chairman, Risch said, "with all due respect to my friend from Virginia, I think the American people are ready for this."

"The American people are smart people, they realize there are people attempting to manipulate them, both domestically and foreign," Risch continued. "And I agree with everyone on the panel: This is going to go on."

Pompeo also suggested, without offering specifics, that Russia had already been made to pay some price for its activities.

Addressing Reed, he said, "your statement that we have done nothing does not reflect the responses that, frankly, some of us at this table have engaged in … both during and before this administration," Pompeo said. He promised to provide more information to the committee in the afternoon's closed, classified session.

"Congress has taken action on sanctions, but I don't think that that limits what this administration will do in the future," he said.

In late January, the Trump administration declined to implement new sanctions associated with earlier legislation that was passed near-unanimously by Congress and intended to punish Russia for its 2016 election meddling. The administration the legislation itself was already serving as a deterrent.

Asked if Mr. Trump was taking the threat from Russia seriously, Burr said, "I think so, but you know I don't judge it based upon an individual, I judge it on based upon the mechanisms that I see in place."

"I don't think you can put all areas of government and the states and the election system on better notice than what we have," Burr said.

Warner, his Democratic counterpart, disagreed.  He said "the message that came out loud and clear from every leader of the intelligence community" was that "this is a problem that didn't go away in 2016, it's ongoing."

"It's remarkable that you've got all the leaders of the intelligence community, yet you still don't have the president of the United States acknowledging the level of this threat," Warner said.