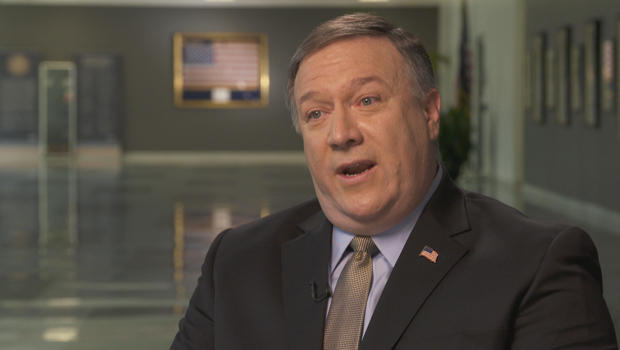 In his first in-depth network interview since taking control of the intelligence agency, CIA Director Mike Pompeo spoke with "CBS This Morning" co-host Norah O'Donnell at CIA headquarters. She asked about the intelligence community's relationship with the White House, and whether the president takes allegations of Russian interference in our elections seriously.

It was Pompeo's predecessor, former CIA Director John Brennan, who told Congress last year that he alerted the FBI to contacts between Russian officials and the Trump campaign, a central focus of the ongoing investigation by Special Counsel Robert Mueller.

O'Donnell asked Pompeo, "Have you seen any evidence of collusion with members of the Trump campaign at the time?"

"I wasn't on the campaign," Pompeo replied. "I haven't seen it. … I can only say this: I've watched this administration deal with all of our adversaries in a way that has been robust. And the CIA, as part of that, is doing our part."

"What is being done to make sure that doesn't happen in 2018, and in the next presidential election in 2020?"

"It's a great question, Norah. It's a very important question. I can't answer it. I can only tell you this: There is a major push, not only from the CIA but all of this administration and this government, to do everything we can to prevent that from happening in 2018, in 2020, in 2030 and beyond."

"Yeah. That's why you shouldn't follow all the reporting," he laughed. "You should take it all with a grain of salt. Except yours, Norah. I'm sure yours is 100 percent accurate."

"So, on that note, is this being taken seriously, the Russian interference in our democratic process?"

"Yes. And I wish it had been taken this seriously previously."

Pompeo has cultivated a uniquely close relationship with President Trump, whose sometimes antagonistic tweets and provocative, post-inaugural speech at the CIA ("As you know, I have a running war with the media") was said to put him at odds with the agency -- something Pompeo denies.

"It was important to me that he come out here, so I asked if he wouldn't, on his first day, come out and talk to the men and women of the CIA," Pompeo said.

"That speech ended up being quite a stem-winder, though," said O'Donnell.

"It was a heck of a day. Our officers appreciated the president coming after a very long evening (laughs) the night before, coming out to Langley to speak with them and share his love for them," he said.

"Your predecessor, John Brennan, had called that speech a despicable display of self-aggrandizement," O'Donnell said. "When a former director criticizes the administration, what does that do?"

"So, there's a long history of former directors behaving in a way that reflects the excellence, professionalism and non-political nature of the Central Intelligence Agency," Pompeo replied. "It is my hope that all of the former directors will behave that way. Because when they don't, they do damage to the CIA."

The former Republican congressman was one of President Trump's first appointees. The two men meet nearly every day in the Oval Office, when Pompeo helps deliver the Presidential Daily Brief on national security matters.

Pompeo said, "Make no mistake about it. We are doing things today that the CIA was not doing a year ago, and there's more risk attached to those."

"Risk-taking: That sounds like you're expanding covert and clandestine operations," O'Donnell said.

To what effect? "I want the president to have the best intelligence in the world."