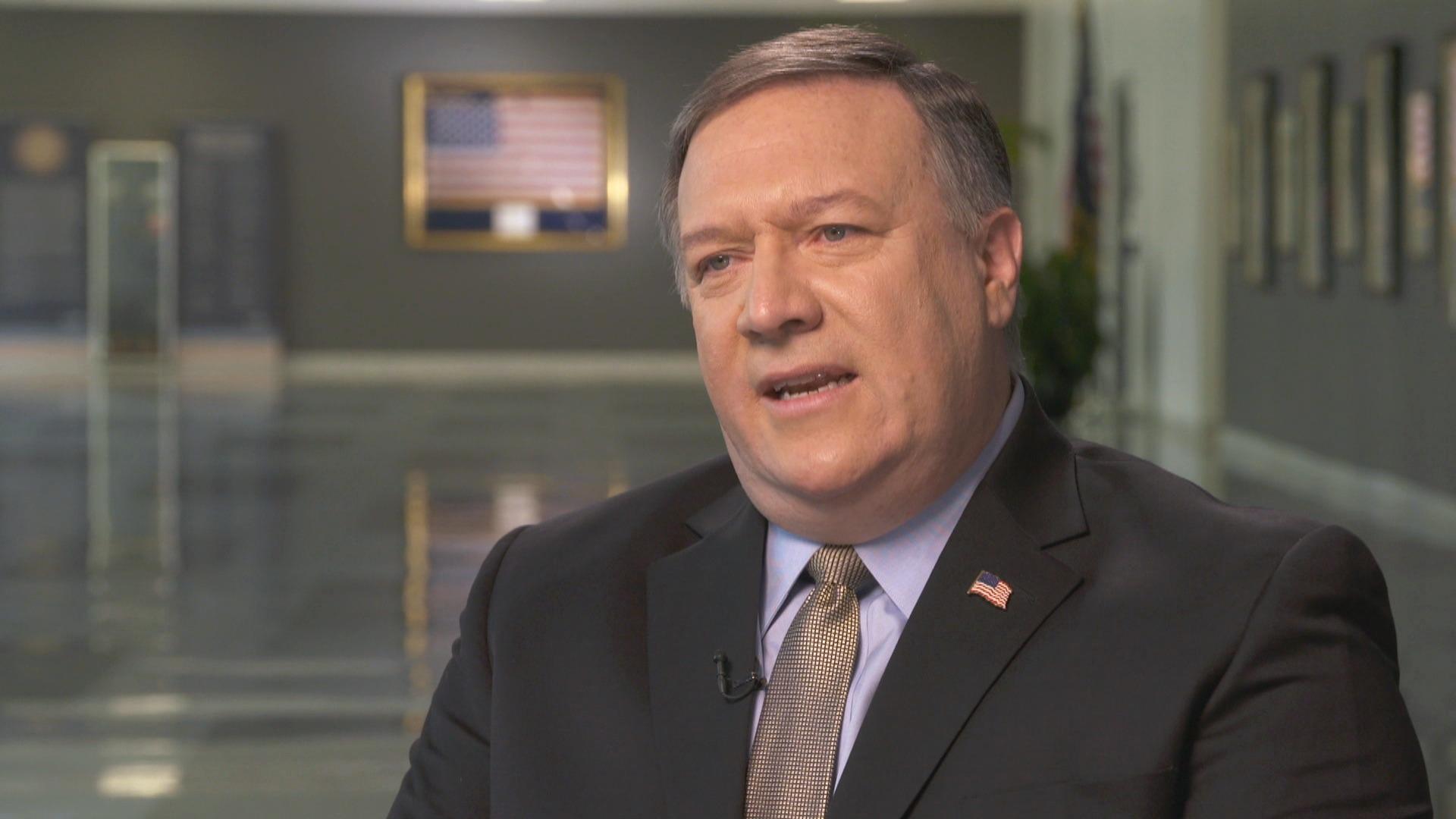 The government shutdown means thousands of intelligence community employees are on furlough. In his first in-depth network interview to discuss his first year as CIA director, Mike Pompeo told "CBS This Morning" co-host Norah O'Donnell that the shutdown "won't impact our operations here at CIA."

The former congressman also explained why the shutdown doesn't necessarily show a sign of weakness in the government.

"The American people are having complicated discussions about their priorities. I think that's entirely appropriate in a democracy," Pompeo said.

O'Donnell also asked about North Korea and how close the regime's dictator, Kim Jong Un, is to delivering a nuclear attack on the United States. Pompeo answered: "a handful of months."

O'Donnell pointed out that he had said the same thing months prior.

"It's true. I hope to be able to say it a year from now as well. … The United States government is working diligently to extend that timeline," Pompeo said.

Full Transcript of Part I:

NORAH O'DONNELL: How does a government shutdown affect national security?

MIKE POMPEO: It won't impact our operations here at CIA. We're gonna continue crushing our adversaries whether the government's open or closed. We do hope it gets opened back up. … But for today and tomorrow and for the few days ahead of us, we're gonna continue to do the things we need to do.

POMPEO: Yeah. Look, I served in Congress, so I've seen this from another role. I'm not sure I agree that it signals dysfunction. The American people are having complicated discussions about their priorities. I think that's entirely appropriate in a democracy.

As director of the Central Intelligence Agency, Mike Pompeo faces a world's worth of national security threats – perhaps none as urgent or as murky as North Korea's nuclear advances.

O'DONNELL: This September Kim Jong Un detonated a sixth nuclear bomb. … Did we know that was coming?

POMPEO: Yes. Here's what we can say. We can always identify that the program is continuing. … We'll never know the exact nature of what's taking place. We'll never know the exact moment that they're going to continue. But the core risk that the policymakers needed to know was that North Korea's nuclear weapons program is continuing to expand, advance, become more powerful, more capable, more reliable. Each of those things had been shared with policymakers.

O'DONNELL: So to be clear, how close is Kim Jong Un to being able to deliver a nuclear attack to the territorial United States?

POMPEO: A handful of months.

O'DONNELL: But correct me if I'm wrong. I do believe you have used that phrase, more than six months ago, you said a handful of months –

POMPEO: It's true. I hope to be able to say it a year from now as well. … The United States government is working diligently to extend that timeline.

POMPEO: Make no mistake about it. We are doing things today that the CIA was not doing a year ago, and there's more risk attached to those.

O'DONNELL: Risk-taking. That sounds like you're expanding covert and clandestine operations.

O'DONNELL: To what effect? What do you want?

POMPEO: I want the president to have the best intelligence in the world.

As America's top spymaster, CIA director Mike Pompeo splits his time between the agency he runs in Langley, Virginia, and the White House, where he personally helps deliver the president's daily brief.

O'DONNELL: What's that like? Take us behind the scenes.

POMPEO: So sometime each morning someone hollers, "Pompeo, you're in." And I, along with [Director of National Intelligence] Coats, [National Security Adviser] General McMaster most days, the vice president as well, deliver the president the most exquisite information any leader in the world ever gets a chance to see.

O'DONNELL: And does it still contain those killer graphics you've talked about?

POMPEO: It does. I love killer graphics. I love 'em. So do you. It helps communicate information, right? This is the important thing … It's absolutely important that we deliver information to the president in a way that in the time that can be allotted to this … that he can grasp the central information that we're trying to deliver to him.

Pompeo has cultivated a uniquely close relationship with President Trump, whose sometimes antagonistic tweets and provocative, post-inaugural speech at the CIA (Trump: "As you know, I have a running war with the media") was said to put him at odds with the agency -- something Pompeo denies.

POMPEO: It was important to me that he come out here, so I asked if he wouldn't, on his first day, come out and talk to the men and women of the CIA.

O'DONNELL: That speech ended up being quite a stem-winder, though.

POMPEO: It was a heck of a day. Our officers appreciated the president coming after a very long evening (laughs) the night before. Coming out to Langley to speak with them and share his love for them.

O'DONNELL: Your predecessor, John Brennan, had called that speech a despicable display of self-aggrandizement. When a former director criticizes the administration, what does that do?

POMPEO: So, there's a long history of former directors behaving in a way that reflects the excellence, professionalism and nonpolitical nature of the Central Intelligence Agency. It is my hope that all the former directors will behave that way. Because when they don't, they do damage to the CIA.

It was former director Brennan who told Congress last year that he alerted the FBI to contacts between Russian officials and the Trump campaign, a central focus of the ongoing investigation.

O'DONNELL: Have you seen any evidence of collusion with members of the Trump campaign at the time?

POMPEO: I wasn't on the campaign. I haven't seen it. I can only -- I can only say this: I've watched this administration deal with all of our adversaries in a way that has been robust. And the CIA as part of that is doing our part.

O'DONNELL: What is being done to make sure that doesn't happen in 2018 and in the next presidential election in 2020?

POMPEO: It's a great question, Norah. It's a very important question. I can't answer it. I can only tell you this: There is a major push, not only from the CIA but all of this administration and this government, to do everything we can to prevent that from happening in 2018, in 2020, in 2030 and beyond.

POMPEO: Yeah. That's why you shouldn't follow all the reporting. You should take it all with a grain of salt. Except yours, Norah. I'm sure yours is 100 percent accurate.

O'DONNELL: So on that note, I mean, sure, I mean … is this being taken seriously, the Russian interference in our democratic process?

POMPEO: Yes. And I wish it had been taken this seriously previously.

While the former Republican congressman from Kansas was no stranger to Washington, Pompeo and his wife, Susan, have sought insider advice about life at Langley.

POMPEO: Director Panetta gave the advice, he said, "It's great, we got two Italians as CIA directors." But also help me think about how to interact with Congress, right? We have an oversight body that funds the organization. So he gave some ideas about how to make sure that relationship was strong and sound as well.

O'DONNELL: And, Susan, what did you learn from this experience? I'm sure there are so many spouses of people who work here at the CIA.

SUSAN POMPEO: Right. It's a whole new world. It really is. And while … I'm able to meet with groups of spouses, which I try to do regularly, Mike always is interested afterwards, you know, "How'd it go? What'd you learn?" and I always say to him, "What I learned is you should hire all of them, too," because it turns out that really smart, capable, bright people marry really smart, capable, bright people who are an amazing patriots. It's a family commitment, like most things are.

Pompeo has swatted away rumors that he's up for a role other than this one, and says he's focused on changing things right where he is.

O'DONNELL: What do you want your legacy here to be?

POMPEO: You know, I haven't thought about it. I've only been doing it for a year … I think our adversaries should know this: when Mike Pompeo leaves as the director of the CIA, this organization will be more vicious, more aggressive, more inclined to take risks to come directly at the threats that America and the world faces. If I can do that … I'll be very proud of what I accomplished during my time as the director.