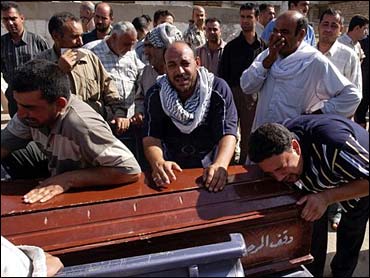 Four suicide car bombings and other insurgent attacks Monday killed 10 people, and at least 16 Iraqis were wounded after militants opened fire on authorities trying to evacuate the injured from one of the blasts.

In one such attack, a suicide car bomb targeting a U.S. convoy in Baghdad missed and instead killed a 6-year-old girl and injured another five Iraqis.

In Baghdad's western Radwanya district, another Iraqi army soldier was killed and three were injured by a car bomb, hospital officials said.

Police have also found the bullet-riddled bodies of 28 people — many thought to be Sunni Arabs — buried in shallow graves or dumped along streets in Baghdad. At least one was identified as a security guard at a leading Sunni charitable organization.

A suicide car bomber blew himself up about 9 a.m. in the Khadra neighborhood of Samarra, about 60 miles north of Baghdad, as an American-Iraqi patrol was passing by, police Lt. Qassim Mohammed said.

As emergency crews gathered, a roadside bomb detonated and gunmen in two speeding cars also opened fire on the crowd, leading to a more than 30-minute exchange of gunfire. Three policemen were killed in the explosion and a total of 16 civilians were injured, Mohammed said.

In Saddam Hussein's nearby hometown of Tikrit, another suicide car bomber killed two police officers and injured six civilians when he blew himself up after being surrounded by security forces, police Lt. Col. Tariq Alwan Al-Jibouri said. A firefighter was also killed, he said, but the circumstances of his death were unclear.

The spiraling violence and rising U.S. death toll — it has pushed past 1,700 — comes despite heavy counterinsurgent crackdowns by Iraqi and American forces in Baghdad and around the country that continued Monday with hundreds of suspected militants being rounded up in the past two weeks.