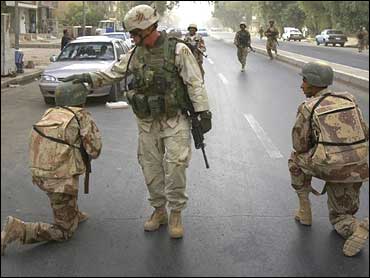 The military announced the killing of four more U.S. soldiers on Sunday, pushing the American death toll past 1,700, and police found the bullet-riddled bodies of 28 people - many thought to be Sunni Arabs - buried in shallow graves or dumped streetside in Baghdad.

The four American soldiers died Saturday in two roadside bombings west of Baghdad, increasing to at least 1,701 the number of U.S. forces who have died in Iraq since the war began in March 2003. The number includes five military civilians.

Lt. Ayad Othman said a shepherd found the buried bodies of 20 men on Friday in the Nahrawan desert, 20 miles east of Baghdad. The bodies were discovered as the Shiite-led government pressed to open disarmament talks with insurgents responsible for relentless violence that has taken on ominous sectarian overtones with recurring tit-for-tat killings.

"All were blindfolded and their hands were tied behind their backs and shot from behind," Othman said.