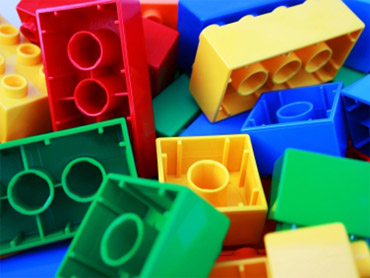 LEGO pieces, Quinn pointed out, are played with by children around the world five billion hours a year, with seven LEGO sets sold every second. Since 1949, Quinn said, more than 400 billion LEGO pieces have been manufactured.

However, playing with LEGO bricks goes beyond mere play for some. "The Early Show" Saturday Edition got a look at LEGO masters in action at LEGO headquarters in Enfield, Conn.

Next, special software transforms the animation into an onscreen LEGO model, which tells the artists everything, from how many bricks are needed to where they need to be placed.

And to create six models at once, master artists work in teams, instructing others on how to build the model. As a rule, Quinn said, all models start from the bottom up.

Artists use a special type of glue and a number of different tools to piece together over 40,000 LEGO bricks for the Buzz Lightyear model. Supported by a steel frame, the final model weighs over 550 pounds and takes over 150 hours to build.

As for the cost of models, the Batman model sold at FAO Schwarz has a price tag of $27,000.