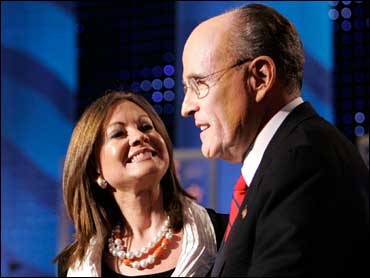 It's a good thing for Rudy Giuliani that he believes in the power of optimism. These days his campaign needs some. For most of 2007 the former New York City mayor led the Republican field in national polls, some state polls, and money raised from individual contributors. He appeared to have convinced at least some conservatives that his opinions on abortion rights (he's for them) and gun control (he supports "reasonable restrictions") were less important than his tough stance against terrorism, his unabashed support for supply-side economics, and his promise to appoint what he called "strict constructionist" judges to the federal bench. Poll after poll showed that Republicans believed Giuliani was the GOP's best chance to hold the White House in 2008.

Those days are over. In about eight weeks Giuliani has gone from frontrunner to second-tier candidate. He lost Iowa and New Hampshire, finishing nowhere close to first. His campaign is pulling resources from this week's contests in Michigan, South Carolina, and Nevada to focus on the January 29 Florida primary, where polls still show him in the lead (by a shrinking margin). The news late last week that senior staff are working without pay put the Giuliani campaign on the defensive, causing it to release cash-on-hand figures showing it isn't broke. On the campaign trail, Giuliani is asked most often about his campaign strategy of not seriously competing in all the contested primaries and caucuses before Florida, then using the momentum from winning that contest to do well in large states like California and New York that vote on February 5. Giuliani says he isn't worried. Conceding New Hampshire, he said, "Maybe we've lulled our opponents into a false sense of confidence now." "Maybe" is right.

What explains Giuliani's slide into irrelevance? Fred Siegel, author of a Giuliani biography and an editor at City Journal, says the former mayor's fate is largely out of his control: "Rudy got caught in a windshear - the fall of Hillary, and the rise of Huckabee and McCain." In this view, Hillary Clinton's missteps in the Democratic race removed the chief rationale for Giuliani's candidacy - that he was the best candidate to face down the Clinton machine. Clinton was also Giuliani's chief foil on the campaign trail, providing the mayor with an opponent against whom he could rally Republicans who might otherwise have been wary of the thrice-married New Yorker. Meanwhile, the success of the surge policy in Iraq revived John McCain's candidacy, drawing national security hawks away from Giuliani. And Mike Huckabee's appearance on the national stage provided social conservatives with a likable champion on the issues they think are most important.

Yet the "windshear" doesn't account for the horrible spate of publicity for Giuliani beginning in mid-November - after which publicity the Giuliani campaign began to tank. The indictment of former New York City police commissioner and Giuliani protégé Bernard Kerik on corruption charges, and a report in the Politico that the mayor's office may have paid improperly for trips Giuliani took to visit then-girlfriend Judith Nathan in the Hamptons, forced the mayor into a defensive crouch. While the Kerik story has subsided and an investigation by the New York Times showed the mayor's office paid for the Hamptons trips properly, Giuliani was unable to recover before the Iowa caucuses.

The result in Iowa wasn't anything for Giuliani to brag about - and that's putting it charitably. The Giuliani campaign once hoped to finish a surprise third in Iowa, but ended up in sixth place with 4 percent of the vote. Gadfly antiwar congressman Ron Paul won 7,000 more votes than Giuliani. On caucus night Giuliani campaign aides circulated a research document arguing that the Iowa GOP caucuses are unrepresentative of the electorate in Iowa and nationwide. They had to argue that because Giuliani's defeat in Iowa was comprehensive.

Giuliani performed little better in New Hampshire, where he finished fourth, two percentage points behind former Arkansas governor Huckabee and one point ahead of Representative Paul. Here, too, Giuliani's performance was lackluster among all demographics. According to the New Hampshire exit poll, not only did Giuliani lose the pro-life vote, he also lost the pro-choice vote - a surprising result, since he is the only pro-choice Republican running this cycle. Giuliani drew support from only 6 percent of independents. The most liberal Republican in the field had the support of only 9 percent of self-described liberals voting in the Republican primary. According to the exit poll, an overwhelming majority of voters in the Republican primary said they were worried about terrorism. Only 8 percent of them supported Giuliani.

The New Hampshire defeat was particularly biting, because Giuliani made a play for the state in late 2007. He visited New Hampshire more than any other state. His campaign spent $3 million in advertising in New Hampshire during the last two months of 2007. All this failed to move his numbers. People close to the campaign say Mitt Romney's attacks on Giuliani on guns and immigration doomed the former mayor. So the Giuliani campaign abandoned its New Hampshire effort.

Meanwhile, Giuliani often seemed disconnected from the national political debate. "You have to be engaged in the dialogue," says a consultant. Giuliani rarely was. Instead he looked backward, discussing his record in New York.

That record is impressive, of course. But it is also moderate-to-liberal in many respects. Which means that Giuliani can't discuss his achievements without creating a space for his opponents to bring up those parts of his record - guns, immigration - that conservatives most dislike.

This is, in the end, what hurt Giuliani in Iowa and New Hampshire. In order to correct for his social liberalism, Giuliani tacked as far right on national security and economic issues as he could. But the social liberalism turned off conservatives, and the foreign policy and economic conservatism turned off moderates and liberals. And Giuliani was left alone.
By Matthew Continetti
©