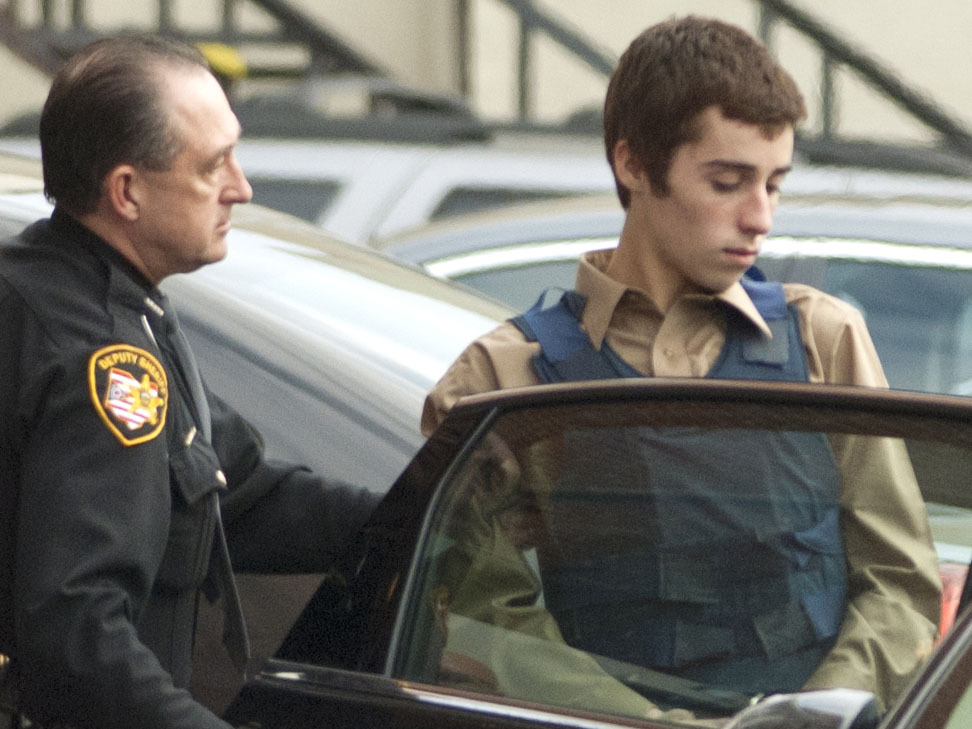 (CBS/AP) CHARDON, Ohio — The teenager suspected in an Ohio school shooting struggled with a broken family and did poorly in school, then appeared to turn himself around once he was taken in by grandparents and began to attend an alternative school, longtime neighbors and friends said Wednesday.

To a person, they expressed disbelief at how the quiet but friendly boy could now be a suspect in a shooting that left three people dead and appears to have involved a gun that disappeared from his grandfather's barn.

"T.J. was a very fine person," Carl Henderson, a longtime neighbor of the suspect's grandparents, Thomas and Michelle Lane, said Wednesday. "Nice-looking man, very friendly, spoke to you, carried a conversation with you."

The gun, a .22 caliber revolver, was noticed as missing after Monday's shootings and fits the description of the pistol that reportedly was used to kill three students and wound two others at Chardon High School, said Henderson, a retired police officer and former Geauga County sheriff. He said he has spoken to the grandfather, Thomas Lane, about the gun.

The suspect's grandfather believes the gun is the same, "because the gun was there the day before, in the barn," said Henderson, 74, who says he's been friends with the boy's family for nearly 50 years.

A law enforcement official familiar with the investigation said the gun used in the shooting, a Ruger .22-caliber Mark III target pistol, was bought legally in August 2010 from a gun shop in Mentor, Ohio.

The official, who spoke to The Associated Press on the condition of anonymity because of the ongoing investigation, said Lane told authorities he stole gun from his uncle. It wasn't clear Wednesday whether the gun might have been the same one missing from the grandfather's barn. Henderson said he isn't aware of an uncle's involvement with the gun.

Lane, 17, admitted taking a pistol and a knife to the 1,100-student Chardon High and firing 10 shots at a group of students sitting at a cafeteria table, prosecutor David Joyce said.

A police report said 33 officers from around the area responded to what was first described as a "shooting accidental" and was over in less than a minute. Emergency crews from four fire departments also responded, according to the report obtained by the AP through a public records request.

The grandparents feel terrible about what happened and have no explanation for the teen's alleged role in the shootings, Henderson said.

Lane came from a broken family but seemed to heal over time, said Henderson, who added that the boy began living with his grandparents off and on several years ago.

Lane's father, Thomas Lane, 40, served seven months in prison in 2003 on charges of disrupting public service and felonious assault, according to state prison records. Messages were left Wednesday at numbers listed for Thomas Lane. Neighbors said he visited his son often, sometimes taking him and his sister camping or to the school to catch the bus.

Russ Miller, who also lives near the Nolans, said he has known Lane since the boy was 5 or 6 years old and the grandparents for at least 35 years. He described Lane as an "easy going" person whose grades had improved since he left Chardon High School about a year and a half ago and began attending Lake Academy, a school associated with the local career center.

"He went from flunking out from what I understand to almost a straight A student with honors and he was going to graduate a year early," Miller said.

Miller, 64, a retired sheet metal worker, said he had talked to him about joining the military, but the boy hadn't made plans.

"He was a typical 17-year-old," said Miller, a Vietnam veteran. "He didn't really know what he wanted to do in his life." He said Lane didn't smoke, drink or do drugs and was "kind of a health nut."

About 55 students attend Lake Academy, a 15-year-old school for students who haven't done well in traditional schools. The school, about 15 miles away from Chardon in Willoughby, has security measures including electronically controlled doors and surveillance cameras but no metal detectors. School officials declined to comment Wednesday.

Another neighbor on Wednesday described T.J. Lane as a normal boy who excelled in school and played outside often with his sister, building snow hills and skateboarding.

Steve Sawczak said he never would have allowed his own grandchildren to play nearby if he thought anything was wrong with the teenager. Sawczak lives next door to Lane's other grandfather, Jack Nolan, who has familial custody of the suspect and attended his court hearing Tuesday.

Sawczak, 58, a pastor who has worked with troubled children, said he never saw hints of what was coming. A next-door neighbor of Lane's grandparents for almost 25 years, he said the couple, who have custody of the teen, gave Lane a healthy place to live. They often took them to school events.

"They are in shock," Sawczak said. "They are absolutely devastated."

At Chardon High, the faculty parking lot was jammed Wednesday as teachers returned to the school for the first time since Monday's shooting, with grief counselors on hand, if needed. Parents and students are encouraged to return to the school Thursday, and classes resume Friday.

Students planned to march together to the school Thursday from the main square about three-quarters of a mile away, along a street where red ribbons were tied to all the trees.

Hundreds of residents turned out for a vigil Tuesday evening at St. Mary Catholic Church to pray and hear Scripture readings, while overhead banners from a rival high school contained signatures from other students showing their support.

As mentioned on "CBS This Morning" Wednesday, Frank Hall, the assistant football coach, is being credited with saving lives when he chased the suspect out of the school. "Chardon's always been great. It's gonna be great. I just want to thank everybody for their thoughts and prayers," he said.

On Tuesday, Lake Academy, the school that Lane attended, issued a statement that read: "This is devastating for all of us at Lake Academy. We are fully cooperating with the ongoing investigation and trust that the authorities will be able to sort out the facts surrounding the incident."

Lane, a thin young man described by other students as extremely quiet, appeared briefly in juvenile court Tuesday. He spoke little, and a judge ordered him held for at least 15 days.

Prosecutors have until Thursday to bring charges and are expected to ask that Lane be tried as an adult. He will probably be charged with three counts of aggravated murder and other offenses, Joyce said.

Joyce described suspect Lane as "someone who's not well" and said the teen didn't know the victims but chose them randomly.

An 18-year-old girl who was hurt in the shootings was released from the hospital Tuesday and was home with family. The girl's family declined to comment Wednesday. The second injured teen remained in serious condition at a suburban Cleveland hospital.

Both sides in the legal case are under a gag order imposed by the judge at the prosecutor's request. The judge also barred media outlets from taking photos of the faces of the suspect and some of his relatives.

The AP transmitted photos and video of Lane that were shot before the hearing. The AP and at least one other media outlet, The Plain Dealer of Cleveland, planned to challenge the judge's order Wednesday.