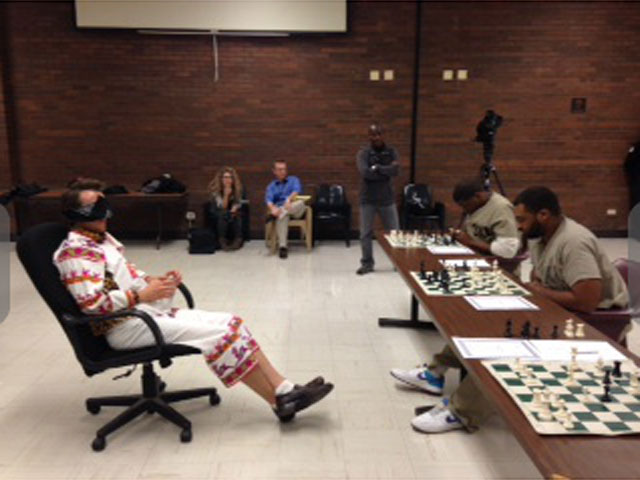 (CBS) CHICAGO - A chess grandmaster, ranked 3rd in the U.S., put his skill to the test Friday at the Cook County Jail in Chicago, beating ten inmates in two hours - while blindfolded - reports CBS Chicago.

According to the station, Timur Gareev visited the jail as part of a program aimed at helping the inmates think before they act.

Cook County Sheriff Tom Dart, who started the program last year, said the goal is to direct inmates away from their inclination to seek out instant gratification.  He told the station chess teaches people patience and strategy.

Gareev reportedly played against 10 inmates on 10 different chess boards on Friday, all while having a black bandana over his eyes. He visualized each game as his opponents' moves were called out loud.

"It's kind of almost a visceral sense of the experience that you take in. If you're trying to memorize every single game, all the moves, all the variations, it's quite impossible," Gareev told the station. "But the memory has all the little tricks that makes it easier to create patterns."

Gareev said trying to play several games at once puts a greater strain on him, making the games more interesting.

"I have to be more resourceful," he said.

"I know I can beat him," he said. "I've been playing chess since the 6th grade."

He didn't win, but he was the second to last to fall to Gareev, reports the station.

This isn't the first time the Cook County inmates have tried their hand at chess. Earlier this year, they played against inmates from Russia in an event organized by former Russian World Chess champion Anatoly Karpov.