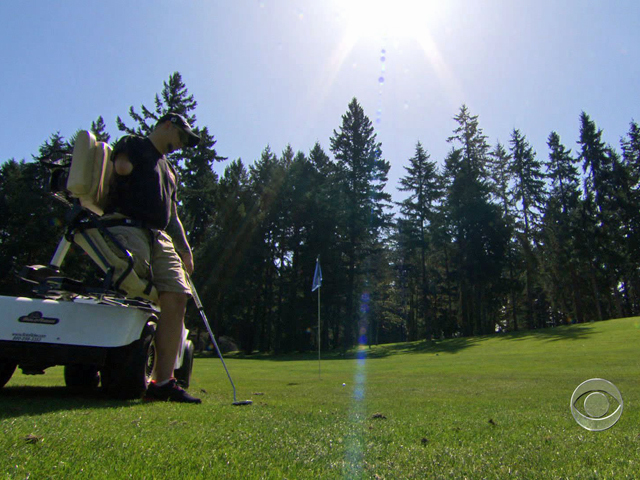 (CBS News) LAKEWOOD, Wash. - On this Fourth of July, America's wounded war veterans face many challenges returning to civilian life. Some are finding help on a different kind of field, where their only weapon is a club.

Two and a half years ago, Aaron Boyle was a 21-year-old Army sergeant on patrol in Afghanistan.

"I took a step back with my right foot and that's where I triggered a landmine," he recalled.

He lost his right arm and right leg.

"I thought I was in a dream," said Boyle. "I woke up, took a look at it and I was like, 'No this isn't me, this isn't happening.' I felt like I didn't deserve this. No one deserves to be like this."

Boyle had been an avid golfer and assumed that, along with so much of his life, that was over.

"I didn't want to give people something to laugh at," he said.

Aaron's father, Ed Boyle, feared that his son had lost the will to live. "His mood wasn't good. He didn't want to be around," he said.

A supportive wife and a new baby helped Boyle get through that period. So, too, did golf.

Boyle discovered the American Lake Golf Course near Tacoma, Wash. The course is entirely run and staffed by more than 200 volunteers, most of them veterans. It was designed with injured veterans in mind.

"They make sure the walls of the bunker aren't too steep," said Jim Martinson, who lost both legs to a landmine in Vietnam 45 years ago, "and that you can get up to the tee boxes and things like that."

He tries to pass along that feeling of optimism to the recently disabled. "I tell them, 'Don't let your life be over. Do whatever you want. Set a goal,'" said Martinson.

It's a message that Aaron Boyle has taken to heart. "I don't care what people think," he said. "I love the game. If I didn't have the game, I don't know if I'd be the same person I am today."

Boyle acknowledged golf has made a difference, which he measures not in strokes, but in the distance he's come.