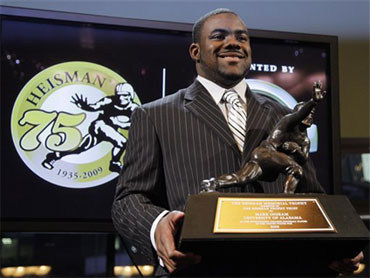 Mark Ingram completed the trophy case at Alabama, delivering the first Heisman to a school that boasts one of the richest histories in college football.

The tough-running sophomore tailback turned tearful after winning the Heisman Trophy on Saturday night in the closest vote in the award's 75-year history. Next, he'll try to lead the most storied program in the South to a national championship.

Ingram finished 28 points ahead of Stanford running back Toby Gerhart.

Ingram wiped away tears and took a moment to steady himself before starting his speech. His voice wavered throughout.

"I want him to be judged for what he's doing on the field," the elder Ingram told Glor. "I know there's a relationship and bond between me and him that will always link us."

Repeating Dad's Steps on Field, Not Off
Ingram Sr. on His Son
Football in the Ingram Family

Ingram has been the backbone of Alabama's offense all season, rushing for a school-record 1,542 yards, gaining 6.2 yards per carry and scoring 18 touchdowns.

And in his final chance to make a case for the Heisman, facing Florida's then-top-ranked defense, Ingram ran for 113 yards and scored three touchdowns to punctuate his season.

The win sent the top-ranked Crimson Tide to the BCS national title game against McCoy and No. 2 Texas on Jan. 7 at the Rose Bowl.

Ingram is the third consecutive sophomore to win the Heisman since Tebow became the first in 2007 and he will be the sixth winner in the last seven years to go on to play in the BCS national championship game.

But at Alabama, it's a coach who has towered over the program more than any player.

Bear Bryant led some of college football's greatest players - from Joe Namath to John Hannah, Ken Stabler to Ozzie Newsome - but never had a player even finish in the top three of the Heisman voting over his more than three decades at Alabama.

David Palmer, the shifty receiver and return man, was third in the Heisman voting in 1993, the best finish by a Crimson Tide player.

No major college program had won more games without a Heisman winner.

"Everybody that's been in the Alabama family has been supporting me," Ingram said. "Walking to class, students flashed me the Heisman pose."

Now he can take his place among Alabama's greats and the Paul W. Bryant Museum has a new piece of a hardware to display.

Ingram came to Tuscaloosa from Flint, Mich., the son of the former Michigan State and NFL receiver of the same name. Tide coach Nick Saban had coached the elder Ingram in college.

Mark Ingram Sr. was a Super Bowl hero for the New York Giants, but last year he was sentenced to almost eight years in prison on bank-fraud and money-laundering charges. Then he did not show up at the federal prison in Kentucky to serve his sentence, which might cost him even more time.

The elder Ingram was found hiding out in a Michigan hotel the same day his son played Utah in the Sugar Bowl last season.

He has been serving his time in a New York City holding facility, where he's better able to watch his son's games on TV.

"My father has been a great influence on my life and I love him to death," Ingram said on the podium.

The father has seen his son quickly blossom into a feature back. As a freshman last season, Ingram was Bama's No. 2 back, with a nose for the goal line. He ran for 728 yards and a team-high 12. This season, he's been the best weapon on an offense with a first-year starting quarterback and a rebuilt offensive line.

And he's been at his best against most of Alabama's best competition. He opened the season with 150 yards rushing and two TDs against Virginia Tech, had 172 yards rushing at Mississippi, and set a Bryant-Denny Stadium record with 246 yards versus South Carolina.

In what was billed as the year of the quarterback - with Tebow, McCoy and last year's Heisman winner Sam Bradford - all returning to college, Ingram emerged as the Heisman front-runner at midseason.

His only poor game, a 30-yard rushing performance against Auburn on Nov. 27, came at the worst time and in front of a national television audience.

But with the Tide playing in the biggest game of the season, a No. 1 vs. No. 2 SEC championship against Florida, Ingram had one more chance to impress voters - and he delivered.

Tide fans like to say their team is about winning championships, not Heismans.

Thanks to Ingram, Alabama might get both this season.