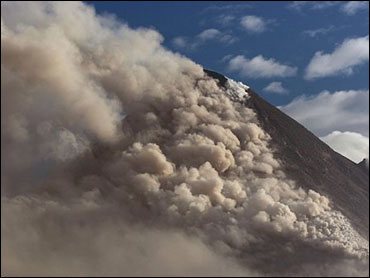 The mountain's lava dome has swelled in recent weeks, raising fears that it could suddenly collapse and send scalding clouds of fast-moving gas and debris down into populated areas.

The government of nearby Magelang district mobilized more than 40 trucks and cars to evacuate about 11,000 villagers from three subdistricts near the foot of the mountain, said Edy Susanto, a district official.

He said the villagers were taken to temporary shelters, including school buildings.

"Of course it is dangerous. But we don't know for sure whether the lava dome will collapse," said Subandriyo, a government volcanologist who uses only one name.

Red-hot lava flowed as far as half a mile from the mountain's crater, while gas clouds called pyroclastic flows streamed as far as 1-1/2 miles down its southwestern slope, Subandriyo said.

The 9,800-foot mountain is one of the world's most active volcanos.

Activity has risen since a magnitude 6.3 earthquake on May 27 hit a region about 20 miles to the south, killing at least 5,862 people.

Some scientists say the quake may have contributed to the increased activity at the mountain.

A major eruption could also severely strain quake relief efforts. The quake damaged or destroyed more than 130,000 homes and at least 835 schools, the U.N. children's agency and government officials said.

The government had earlier urged residents to evacuate from a danger zone on the mountain's fertile slopes, but thousands of villagers remained in their homes, saying they didn't want to abandon their fields and livestock and complaining of boredom at the shelters.

The mountain, about 250 miles east of the capital, Jakarta, is notoriously unpredictable. Government scientists say they're not sure whether the lava dome will suddenly collapse, simply keep growing, or gradually break into small pieces.

Its last deadly eruption was in 1994, when it sent out a searing gas cloud that burned 60 people to death.

Indonesia is located on the so-called Pacific "Ring of Fire," an arc of volcanoes and fault lines encircling the Pacific Basin. It has 76 volcanoes, the largest number in the world.