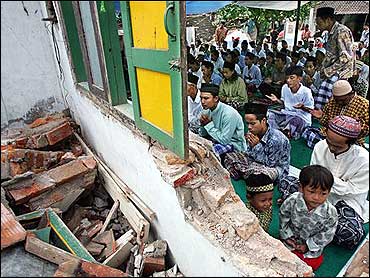 The United Nations said Friday $100 million was "urgently" needed to help survivors of Indonesia's earthquake, as the injured and bereaved marked the Islamic day of prayer amid the rubble of their homes.

"We should not cry or stay in mourning," one preacher told worshippers outside a damaged mosque in the center of destroyed Bawuran village. "We should thank God that we are still alive."

Adding to people's concerns, the nearby Mount Merapi volcano — one of the country's deadliest peaks — shot out large plumes of ash and sent lava avalanching down its slopes 35 times on Friday.

The 6.3-magnitude earthquake that struck before dawn nearly a week ago killed more than 6,200 people and injured 30,000 more across a large swathe of Java Island. Officials estimate it destroyed 135,000 houses.

The massive relief and soon-to-start reconstruction effort comes as Indonesia is still trying to rebuild from the 2004 tsunami, which killed 131,000 people in western Aceh province, and is also fighting a spiraling human bird flu case load.

Local and international aid workers have yet to reach some remote areas, and delivery of food, medicine and tents to the estimated 650,000 people made homeless by last weekend's disaster has been sporadic in others.

Most of the survivors are living in makeshift shelters without toilets or running water.

An estimated $100 million will be needed over the next six months to address the most immediate needs, according to the U.N. Office for the Coordination of Humanitarian Affairs, adding that nearly half of that money should go toward housing.

Though trucks loaded with humanitarian relief clogged recently repaired roads in some areas, villagers a few miles from aid distribution centers said they had received little or no help.

In Telan, a village in hardest-hit Bantul district, three families were crowded under one tarp.

"We are poor people. If we don't work hard, how can we survive?" asked one resident, Soliman, as he and his wife salvaged bricks, tiles and wooden posts from the remains of their house so they could start to rebuild.

Friday, the Islamic day of prayer, provided some respite from their sufferings.

Around 100 people, several of them bearing quake injuries, prayed together on a road close to the devastated village of Telan. Afterward, they ate rice and fried bean curd together, while an aid worker from the capital, Jakarta, urged them to be patient.

"The event has helped me," said Ngatimin, who lost his only son to the disaster. "I am sure the village can be put back together again."

Though hospitals have been overwhelmed with patients — some lying on pieces of cardboard in parking lots or on hallway floors — doctors and international health officials denied reports that hundreds of victims were dying daily.

"Maybe 400 since the beginning of the quake, but not a day," said Dr. Hidayat, noting that his hospital, the busiest in the region, had treated thousands of patients since the temblor struck.

Conditions appeared much better Friday, with volunteers cleaning up piles of rubbish.

More than 20 nations have either sent aid workers or emergency supplies, from U.S. Marines to Singaporean medical teams.

"The obvious concern for the humanitarian community is to care for those who have gone through and lived through this disaster, in particular the injured and the homeless," said Charlie Higgins, head of U.N. relief operations.

Sari Setiogi, a World Health Organization spokeswoman, said there had been no outbreaks of diseases so far, but noted that diarrhea — which can be fatal, especially for children — often occurred in disaster zones.

Indonesian Vice President Jusuf Kalla was quoted as saying by the state-run Antara news agency that rather than more doctors and nurses, foreign governments and aid organizations should provide money to help rebuild homes.

Some remained hospitalized Friday, but their condition was not believed to be serious.