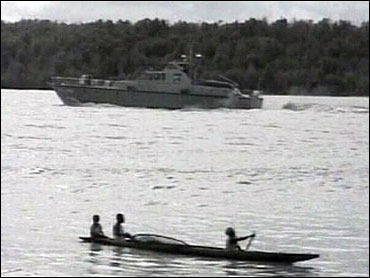 Search teams Monday braved choppy waters to search for survivors of a ferry that sank in eastern Indonesia killing up to 200 people, while rescue boats prepared to flip the stricken vessel to see if bodies remained trapped inside.

Tallying a final death toll in Thursday's disaster off the southern coast of remote Papua province will be difficult because the 150-ton KMP Digul was carrying far more passengers than reflected in its manifest.

The ferry was officially reported to be carrying 50 crew and passengers, but survivors have told authorities the number of people on board was five times that. So far, only 15 — two crewmen and 13 passengers — have been found alive.

Five vessels combed the area on Sunday, but found no bodies.

Rescue teams now feared no other people would be found alive, but that the search would go until Thursday, said Sumpeno Juono, from the local Search and Rescue agency.

"It is going to be difficult to find the bodies because many were taken away by high waves and will be washed into thick mangrove forests," he said.

The vessel is currently floating on its side in deep water. Rescue boats equipped with ropes and primitive winches were trying Monday to flip it over to gain access to its hold, where it is feared bodies remain.

The ferry — which was also carrying vehicles, heavy equipment and 40 tons of diesel oil — did not have any safety equipment and sank quickly in high seas.

Boat accidents are common in Indonesia, a vast archipelago where safety rules are poorly enforced and rescue vessels are often unavailable.