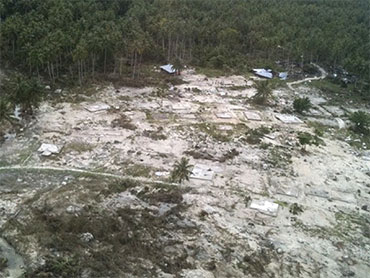 The death toll from a tsunami and a volcano rose to more than 300 Wednesday as more victims of Indonesia's double disasters were found and an official said a warning system installed after a deadly ocean wave in 2004 had broken from a lack of maintenance.

Hundreds were still missing after Monday's tsunami struck the remote Mentawi islands off western Sumatra, where officials were only beginning to chart the scope of the devastation. At least 311 people died as the huge wave, triggered by an undersea earthquake, washed away wooden and bamboo homes, displacing more than 20,000 people.

About 800 miles to the east in central Java, the Mount Merapi volcano was mostly quiet but still a threat after Tuesday's eruption that sent searing ash clouds into the air, killing at least 30 people and injuring 17. Among the dead was a revered elder who had refused to leave his ceremonial post as caretaker of the mountain's spirits.

President Susilo Bambang Yudhoyono rushed home from a state visit to Vietnam to deal with the catastrophes, which struck within 24 hours along different points of the Pacific "Ring of Fire," a series of fault lines prone to earthquakes and volcanic activity.

A senior Indonesian military official tells CBS News that five ships from the nation's navy were being deployed to Mentawai carrying logistical and supplies and aid to the victims. Some of the navy's Hercules planes were also be deployed to the hard-to-reach islands.

Huge swaths of land were underwater and homes were torn apart by the 10-foot wave that hit Pagai Utara island in the Indian Ocean south of Sumatra. One house lay tilted, resting on the edge of its red roof, with tires and slabs of concrete piled up on the surrounding sand.

Hundreds of homes were washed away in about 20 villages, displacing more than 20,000 people, Edward said. Many were seeking shelter in makeshift emergency camps or with family and friends.

Vice President Boediono toured devastated villages on Pagai Utara and met with survivors and local officials, his office said. At one point, he paused solemnly in front of several corpses in body bags.

The charity SurfAid International is getting "grim news" from village contacts, said Andrew Judge, head of the group founded by surfers who have been helping deliver aid. He said he is hearing of "more death, large numbers of deaths in some villages."

With the arrival of help, Edward said officials "finally ... have a chance now to look for more than 400 still missing."

The islands lie close to the epicenter of the 7.7-magnitude quake that struck late Monday beneath the ocean floor. The fault line on Sumatra island's coast is the same one that caused the 2004 quake and tsunami that killed 230,000 people in a dozen countries around the Indian Ocean.

After that monster wave, many countries set up early warning systems in their waters hoping to give people time to flee to higher ground before a tsunami - which can travel hundreds of miles - crashed ashore.

Indonesia's version, completed in 2008 with German aid, has since fallen into such disrepair that it effectively stopped working about a month ago, according to the head of the Meteorology and Geophysic Agency.

The system, which uses buoys to electronically detect sudden changes in water level, worked when it was completed, but by 2009 routine tests of it were showing problems, said the agency chief, who uses the single name Fauzi. By last month, he said, the entire system was broken because of inexperienced operators.

"We do not have the expertise to monitor the buoys to function as intended," he said.

As a result, he said, not a single siren sounded after Monday's quake. It was unclear if any sirens could have made a difference, since the islands worst affected were so close to the epicenter that the tsunami would have reached them within minutes.

The group that set up the system, the Germany-Indonesia agency Tsunami Early Warning System (GITEWS), could not be reached for comment Wednesday, but the questions Fauzi raised highlighted the difficulty for a poor country such as Indonesia in disaster prevention and response.

On the ash-covered slopes of Mount Merapi, authorities continued a search for more victims. Dr. Teguh Dwi Santosa, who works at a local hospital, said the death toll had climbed to 30.

The eruption sent thousands streaming into makeshift emergency shelters, although the ash did not disrupt flights over Indonesia. About 36,000 people have been evacuated, according to the Indonesian Red Cross.

Some defied authorities and returned home to check on crops and possessions left behind. More than 11,000 people live on Merapi's fertile slopes.

Tuesday's blast eased pressure that had been building behind a lava dome on the crater. Experts warned that the dome could still collapse, causing an avalanche of the blistering gas and debris trapped beneath it.

"It's a little calmer today," said Surono, the chief of Center for Volcanology and Geological Hazard Mitigation. "But a lot of energy is pent up back there. There's no telling what's next."

Among the dead from Tuesday's eruption was an 83-year-old man named Maridjan, who was entrusted by a late king from the nearby city of Yogyakarta to watch over the mountain's unpredictable spirits. He had refused to leave his house high on its slopes.

The discovery Wednesday of his ash-covered body, reportedly found in a position of Islamic prayer, kneeling face-down on the floor, rattled residents who for years joined his ceremonies to appease the rumbling giant by throwing rice, clothes and chickens into the crater.

"I'm more afraid than ever," said Prapto Wiyono, a 60-year-old farmer from the mountain village of Pangukrejo. "Who's going to tell us what's going on with Merapi?"