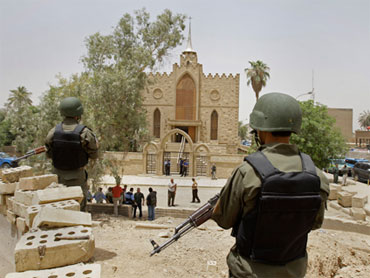 The U.S. military said Friday that three of its soldiers were killed in an attack on a base outside Iraq's second largest city of Basra, in the south.

Also, two Iraqis were killed and at least two dozen others were injured in bombings in Baghdad as huge crowds of pilgrims gathered to commemorate a revered Shiite saint. In Karmah, 50 miles west of the capital, the daughter and granddaughter of a police officer died in a bombing at his home.

The security situation in Iraq has improved dramatically in the last two years, though militants still carry out lethal attacks on a regular basis.

"Three Multi-National Division-South Soldiers were killed when Contingency Operating Base Basra was attacked by indirect fire," the U.S. military said, referring to a mortar or rocket attack. The attack happened around 9:15 p.m. on Thursday.

Britain, which had a large force there, has ended combat operations and begun pulling out its troops. The British bases around the city and the airport were once subject to regular mortar barrages by Shiite militias believed to have received funding and training from Iran.

Col. Butch Kievenaar, the top U.S. military commander in southern Iraq, said in a Defense Department briefing earlier this week that some Iraqi extremists who had gone to Iran have returned to the Basra region.

(CBS)
He said he believed they were pursuing criminal activities such as extortion, and there had been no clear sign that they had a "militia" agenda.

He said some groups were still receiving support from Iran, but "most of the individuals that we see or deal with on a daily basis" are no longer receiving the same level of backing from the Iranians as in the past.

In Karmah, two bombs exploded around 3 a.m. Friday near the house of police Capt. Bahjat Khawam. The bombs were planted under the police officer's car and near a gate to his house. The police officer's 12-year-old daughter and a 4-year-old granddaughter were killed in the attack. Khawam, who works in Karmah police station, and other six family members were wounded.

In Baghdad, a bomb planted under a bridge killed a married couple who were among hundreds of thousands of Shiite pilgrims heading to a holy shrine to commemorate Imam Mousa al-Kazim, a revered Shiite figure.

Twelve others were injured when the bomb exploded around 2:30 a.m. Friday, according to police and medical officials, who spoke on condition of anonymity because they weren't authorized to talk to the media. Iraqi officials say three other roadside bombs targeting pilgrims in Baghdad wounded at least 15 people.

At the same event in 2005, nearly 1,000 Shiite pilgrims died in a stampede during a religious procession on a bridge near the shrine. They panicked when they heard unfounded rumors of a suicide bomber, and crushed one another or plunged into the Tigris River.

Under former Iraqi leader Saddam Hussein, these pilgrimages were severely curtailed. After his fall, they experienced a massive resurgence but have also been targeted by Sunni insurgents. Security in Baghdad was tightened, especially around the shrine in the northern Baghdad neighborhood of Kazimiyah.