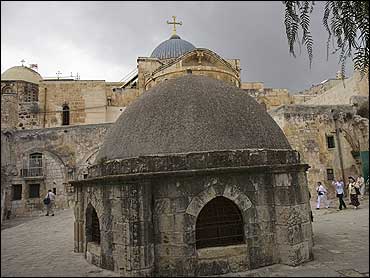 Two rival monks are posted at all times in a rooftop courtyard at the site where tradition holds Jesus was crucified: a bearded Copt in a black robe and an Ethiopian sunning himself on a wooden chair, studiously ignoring each other as they fight over the same sliver of sacred space.

For decades, Coptic and Ethiopian Christians have been fighting over the Deir el-Sultan monastery, which sits atop a chapel at the ancient Church of the Holy Sepulcher. The monastery is little more than a cluster of dilapidated rooms and a passageway divided into two incense-filled chapels, an architectural afterthought alongside the Holy Sepulcher's better-known features.

And yet Deir el-Sultan has become the subject of a feud that has gone far beyond the walls of Jerusalem's Old City. The Ethiopians control the site, but the Egypt-based Copts say they own it and see the Ethiopians as illegal squatters.

The quarrel has erupted into brawls - in 2002, when the Coptic monk moved his chair into the shade and too close to the Ethiopians, a dozen people were hurt in the ensuing melee. And today, the Ethiopians claim the battle for control could result in the monastery's collapse and even in damage to other parts of the church, one of the holiest sites in Christendom.

Since the 1970s, the Israeli government has refused to allow renovations or significant repairs at the disputed monastery until the Ethiopians and the Copts come to terms. That hasn't happened, and the Ethiopian Church says the years of neglect have put the structure in danger. The Copts suggest the Ethiopians are merely trying to further cement their hold.

The Ethiopian Church commissioned a report from an Israeli engineer backing up its claim, and in early October the Ethiopian patriarch, Archbishop Matthias, asked the Israeli government to carry out urgent repairs. The archbishop attached the engineer's assessment that the humble monastery structure could collapse - and possibly damage the chapel below - if steps are not taken to repair it.

The report, compiled by Yigal Berman of the Milav engineering firm, cited "safety hazards" that "endanger the lives of the monks and the visitors," according to a report in the daily Haaretz newspaper. Yifredew Getnet, a spokesman for the Ethiopian Embassy to Israel, confirmed the report. A committee made up of embassy representatives, churchmen and lay leaders has been appointed to oversee the monastery, he said.

Outside the monastery, Coptic monk Antonious El-Orshlemy said his church owns Deir el-Sultan and the Ethiopian claim that the monastery is about to collapse is false.

"The building is very fine, and not dangerous to someone," he said.

The most recent round of the feud over Deir el-Sultan began in 1970, when Ethiopian monks changed the locks while the Copts were at services on the eve of Easter and moved in.

The Ethiopian Church has six monasteries and 70 monks in the Holy Land, according to the office of the patriarch. A handful are stationed at Deir el-Sultan. The main parts of the Holy Sepulcher are divided between the Catholics, Armenians and Greek Orthodox.

Three years before the Easter takeover, Israel captured the Old City from Jordan in the 1967 Mideast War and found itself in charge of the Holy Sepulcher.

The Copts appealed to an Israeli court, which ruled that the Ethiopians should not have altered the fragile status quo at the church but said it was the government's job to decide what to do. The government decided not to take action, according to Daniel Rossing, director of the Jerusalem Center for Jewish-Christian Relations and an expert on the city's fractious religious mosaic.

International politics likely played a role in the decision: At the time, Israel had warm ties with Ethiopia and was at war with Egypt. Later that was reversed: Communists came to power in Ethiopia and cut ties with Israel, and Egypt and Israel signed a peace agreement. But Israel still did not act, possibly because of concerns that angering Ethiopia could hamper the emigration of the country's Jewish community.

Feuds like the one over Deir el-Sultan "don't have a solution, period," Rossing said. "The trick, then, is to do the very best job to make things as livable as possible, within the limitations of never being able to solve these issues."

Israel's interior minister, Meir Sheetrit, now plans to mediate the dispute, and the government will help renovate the site when the sides can agree on a course of action, said spokesman Ilan Marciano. But with each side entirely rejecting the other's claim to the monastery, it is unclear if an agreement is possible.

The feud is only one of a bewildering array of rivalries among churchmen in the Holy Sepulcher, where each group remains on guard against any encroachment onto their turf. Fights have flared over issues such as who is allowed to sweep which steps, and Israeli police occasionally intervene.

The Israeli government has long wanted to build a fire exit in the church, which regularly fills with thousands of pilgrims and has only one main door, but the plan is on hold because the sects cannot agree where the exit will be built. In another example, a ladder placed on a ledge over the entrance sometime in the 19th century has remained there ever since because of a dispute over who has the authority to take it down.