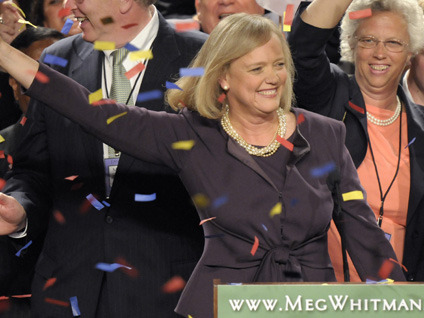 Republican women made a strong showing in California in Tuesday's primaries, save for Orly Taitz, the infamous "birther" who was vying for the Republican nomination for Secretary of State.

Meg Whitman, the billionaire former eBay CEO, saw her more than $81 million investment (including $71 million of her own money) in the gubernatorial primary pay off. She soundly defeated state Insurance Commissioner Steve Poizner for the GOP nomination, even though he also spent a small fortune of $25 million on the race. She will now face former Democratic Gov. Jerry Brown in the general election.

Another female titan of the tech industry, former Hewlett-Packard CEO Carly Fiorina, won the GOP nomination for Senate, pitting her against three-term Democratic Sen. Barbara Boxer. Fiorina prevailed over former Rep. Tom Campbell and Tea Party-backed Chuck DeVore. Fiorina propelled her campaign forward with an investment of $5.5 million of her own fortune and the endorsement of former GOP vice presidential candidate Sarah Palin.

The primary results pit the female businesswomen against Democratic politicians that have a combined total of 59 years of experience in elected office, the Los Angeles Times points out.

"Jerry Brown has spent a lifetime in politics, and the results have not been good," Whitman said last night. "Failure seems to follow Jerry brown everywhere he goes."

Brown, meanwhile, promised an "agenda of humility" in Sacramento, the Sacramento Bee reports, emphasizing his experience and frugal style.

"It's not enough for someone rich and restless to look in the mirror one morning and decide, 'Hey, it's time to be governor of California,'" he said.

After results for the Senate primary came in, Campbell also warned voters against too quickly dismissing experience, according to the L.A. Times.

"We're not at a good point in our political system," the defeated Republican said. "We need to have people with experience in government so we can learn from what we have done before. So I am worried."

In his concession speech, DeVore channeled the anti-incumbent sentiment that fueled his and other Tea Party candidacies, the L.A. Times reports, urging Fiorina to fight "as vigorously as possible over the next five months to... end [Boxer's] 28-year reign on Capitol Hill."

But the anti-incumbent mood wasn't strong enough to help Orly Taitz, the woman best known for questioning whether President Obama is a natural born citizen, in her bid for the GOP nomination for secretary of state. She was soundly defeated by former NFL player Damon Dunn, who garnered 74 percent of the vote to Taitz's 25 percent. Dunn now goes on to challenge Democratic Secretary of State Debra Bowen.

California voters also approved Proposition 14, a measure that will revamp the primary process in the state. Traditional party primaries would be replaced with a first round of voting in which all candidates are on the ballot. The two candidates who win the most votes -- regardless of party -- move on to the general election. The change could potentially create races in which there are two Democrats on the ballot and no Republicans, or visa versa. Proponents of the system say it will help moderate candidates win, but opponents say it undermines the party system and would make it difficult for third party candidates to ever gain a spot on a general election ballot.

Bowen, the secretary of state, said yesterday there will be an "army of lawyers" reviewing at the constitutionality of the proposition, the Sacramento Bee reports.