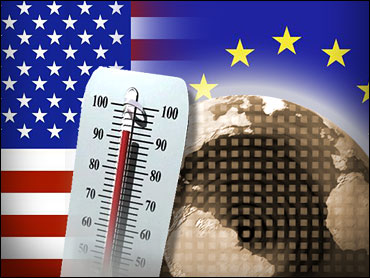 U.S. negotiators met tough opposition Tuesday from both European and poor countries in seeking exemptions to a global treaty requiring nations to stop using chemicals that destroy the ozone layer.

The U.S. delegation was defending a request not only to be exempted from phasing out the insecticide methyl bromide but also to seek permission to increase production of the known carcinogen by nearly 30 percent.

The request was made at the 15th Meeting of the Parties to the Montreal Protocol on Substances that Deplete the Ozone Layer, a normally routine annual event where politicians and scientists make adjustments to what is considered the most successful international environmental treaty.

The protocol established a system by which nations would gradually eliminate chemicals that destroy the ozone layer, which prevents ultraviolet light from reaching the earth and harming living things. Methyl bromide is one of the last of the major chemicals to be phased out.

Under the protocol, wealthy nations are required to cut production of methyl bromide by 70 percent in 2003 and eliminate it completely by 2005.

Delegates meeting this week must decide on exemptions for countries that say they have a critical need for methyl bromide and have no alternatives.

If the exemption is approved by the meeting, the United States would produce 9,777 tons of methyl bromide in 2005.

"The request was based on our government's survey of the growing community in America and what their needs were, and for them to analyze where they use methyl bromide and where they can use alternatives," Claudia MacMurray, leader of the U.S. delegation said. "We went through a substantial review of that ... and our government knocked the number way down."

The U.S. request was reviewed by a technical committee, which recommended that delegates approve a third of the U.S. request, but it offered only qualified support for the other two-thirds. MacMurray said she would seek approval of the entire request, which she said was critical to American farmers.

Delegates from Japan, Norway, Mexico, Guatemala and the Dominican Republic also criticized the U.S. requests. The head of the Japanese delegation told the meeting that even the 30 percent level was too high.

The chairwoman of the meeting asked the U.S. and EU delegations to propose solutions to the impasse. The meeting has until Friday to come up with a compromise.

David Doniger, an attorney for the Natural Resources Defense Council, roundly attacked the U.S. position as a major step backward. As a U.S. delegate under then-President Bill Clinton's administration, he helped negotiate the methyl bromide rules, and he described the U.S. position as part of an ongoing effort to subvert environmental protections.

"The Bush administration is catering once again to a powerful industry," he said. "It's the power companies one day, the oil companies another day and agribusiness here."